Sándor Ferenczi, The Father of Psychoanalysis 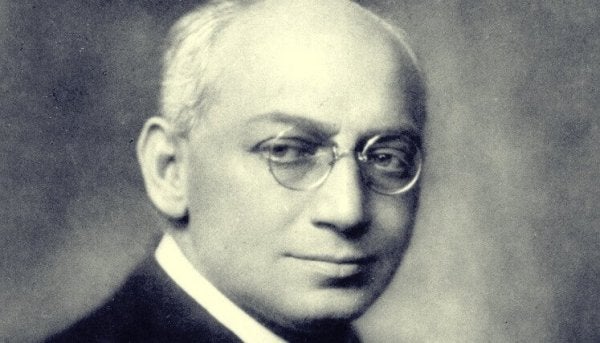 Sándor Ferenczi is known in history as the “enfant terrible” of psychoanalysis. This man of science was born on July 7, 1873 in Hungary. His original name was Alexander Frankel. However, his father adopted the surname Ferenczi in 1880 and he was left with the diminutive of Alexander, “Sándor”.

Ferenczi had 11 brothers and lost his father prematurely. His mother took charge and ran a family bookstore. It’s said that Ferenczi derived a considerable part of his thesis from that singular family nucleus. Freud, who later was his teacher, came to speak of “Ferenczi’s fraternal complex“.

“One definitely gets the impression that to be left deserted results in a split of personality.”

As Sándor noted, he had a loveless childhood. His mother was very strict and expressions of affection were almost forbidden in the family. At the same time, the bookstore allowed him to begin reading from a very young age and he became a poet early in life. He moved to Vienna when he was young and went to college to study medicine.

Ferenczi and his encounter with psychoanalysis

Sándor Ferenczi got his medical degree at the age of 21. At that time, he specialized in neurology and psychiatry. Between the years 1899 and 1907, he published a large number of articles in a Hungarian journal that specialized in medicine, The Budapest Writings. This is where he first started talking about psychoanalysis.

Ferenczi was impressed by Carl Jung’s work and ideas. They had the opportunity to meet when he visited Hungary. Jung managed to get Ferenczi and Freud to meet because he thought that they would benefit from hearing each other’s ideas.

From that point on, an intimate friendship blossomed between Ferenczi and Freud. It’s clear from their biographies that they exchanged many letters.

Sándor Ferenczi had a stormy and contradictory love life. Many are sure that his life was full of psychoanalytical concepts, such as the Oedipus complex and repetition compulsion. At the age of 31, he fell in love with Gizella, a married woman who was eight years older than him. She wanted to divorce her husband, but he refused. Therefore, her relationship with Ferenczi remained in limbo.

Elma, Gizelle’s daughter, felt deeply depressed, and her mother advised her to see Ferenczi. She went to a consultation and he soon began to feel that he couldn’t keep his analytical impartiality. He eventually fell in love with his lover’s daughter. This is why he gave up administering psychoanalysis to Elma and sent her to Freud. Freud saw her for three months and sent her back to Ferenczi’s office.

Meanwhile, Gizelle and Ferenczi’s love was reborn. In therapy, Ferenczi convinces Elma to move far away. He finally married Gizelle, but that relationship never managed to overcome their rocky past. What does all this drama have to do with psychoanalysis? The love triangle reveals Ferenczi’s own neurosis. Many of his conclusions came from these experiences.

One of Sándor Ferenczi’s most memorable works is Psychoanalysis and Pedagogy. In it, he analyzed the effect education has on our traumas and also on our neuroses. He goes on to say that pedagogy seeks to deny our emotions and ideas. This makes children ultimately deceive themselves, denying what they know, feel, and think.

He argues that psychoanalysis should be a process that allows the individual to break away from prejudices that keep them from really getting to know themselves. It also introduces valuable contributions as to how one should carry out the psychoanalytic process. One of these contributions is called “didactic psychoanalysis“. This means that every psychoanalyst must subject themselves to psychoanalysis before treating patients. It’s clear why this is important.

He also devised the “active technique”. It involved great flexibility in the psychoanalytic setting, dependant on the patient’s characteristics and the specific circumstances of the problem. Many have questioned this concept, but some people still apply it today. In the same way, he developed the concept “identification with the aggressor”, although this is generally attributed to Anna Freud.

One of his biographers describes Ferenczi as “a peculiar, dreamy, and sensitive psychoanalyst”. Many claim that his work isn’t valued enough. This may be so, since his romantic ups and downs made many of his colleagues reject him. Maybe that’s why his name hasn’t been immortalized yet.

Can Mental Illnesses be Inherited?
Many people wonder if mental illnesses can be inherited, especially if they have family who suffer from a mental disorder. Learn more in this article. Read more »
Link copied!
Interesting Articles
Culture
I Am Free, Whether You Like It or Not

I am free, even though some don't like that fact. As human beings we have fought for our freedom. Sometimes to define…

Ernest Hemingway's quotes have inspired many of his readers. He was an American writer and journalist. He won the Pulitzer Prize in…