Externalization: A Way to Get Away from Your Problems 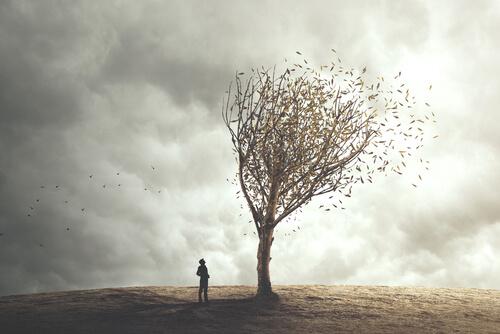 We humans often need help dealing with our problems. Well, one thing we can do is go to therapy, and one of the most widely used techniques there is externalization, which we will talk about today.

People come to therapy with all kinds of problems they haven’t been able to solve on their own. These problems are often internal. That means that they have not been fully constructed and thought out. Often, the symptoms are what get people to therapy: anxiety, lack of motivation, sadness, stress, relationship problems, family problems, etc.

Externalization is a tool psychologists use to help their patients work out their problems. It allows us to observe our problems or symptoms from the outside and find meaning or solutions quickly and effectively.

Symptoms do not define people

People who go to therapy are usually very attached to their beliefs, problems and symptoms. In fact, they might see these things as part of themselves, and they aren’t aware of any other perspectives.

For example, a person may find it difficult to differentiate themselves from their anxiety, their depression or their low self-esteem. It’s hard for them to not include it in how they talk about their personality.

The origins of externalization can be traced back to systemic therapy. One of the first to propose this approach was systemic therapist Michael White, who turned this technique into the central axis of his therapeutic approach.

“We fail more often because we solve the wrong problem than because we get the wrong solution to the right problem”
-Russell L. Ackoff-

We are often so immersed in our problems that we cannot see any solution. Externalization means exposing something that a person assumes is only inside. It can be done through drawing, for example. The idea is to externally observe the problem.

Let’s think about a person who has a lot of anxiety. They have internalized it to the point where they now define themselves as an anxious person. It is painful for them, as well as mentally, emotionally and physically exhausting. But externalization of the symptoms can help relieve that suffering.

You choose which element to externalize (symptoms, emotions, problems) and name it. Then you create distance between the person and what they externalized. Finally, you help the person to see their problem from another point of view.

The benefits of changing perspective

The benefits of externalization include:

How can you get away from your problems?

With this technique, we don’t just externalize problems or symptoms, but also learn a lot about our own qualities, resources and strengths. This allows a person to see their problem from a constructive perspective and not get so overwhelmed. It’s like putting new glasses on.

Put Your External Chaos in Order to Be Happier
Read more »
Link copied!
Interesting Articles
Psychology
From Now On, I Am My Own Priority

I've often felt like I wasn't a priority for other people. I even decided not to see it that way and convince myself…

Neurohappiness. Reading the term is enough to spark one's curiosity like that of a child seeing a magic trick. Suddenly,…

We go throughout our days without ever giving ourselves a few minutes to see how we're doing. Emotional ignorance can sometimes…

Educational Psychology
What's Positive Reinforcement and How to Use It?

How can we ensure that someone repeats certain behavior patterns? How do we increase their frequency of occurrence? It's all…