Why Are We Romantic? Why Are We So Fascinated With Love? 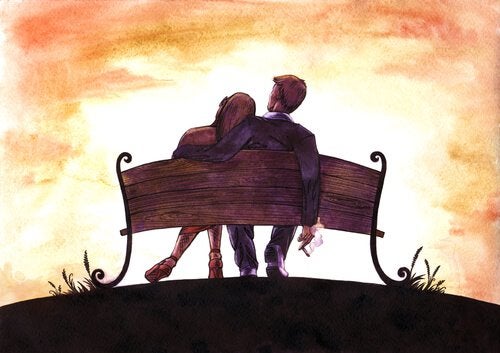 Are we romantic by nature? What leads us to love so hard at times it almost seems like it can hurt us? Why do important people like Leonard Cohen end up saying things like “Love has no cure, but it is the only cure to every ill”?

Truth be told, love can be easy to describe. But it is also very complex when we wait for it, live it or put it aside. Nevertheless, there are researchers who have tried to find cognitive and even historical explanations for it. One of them is Helen Fisher. She is an anthropologist and biologist who has been trying to find an answer to this enigma for over 30 years.

Fisher’s investigation to figure out why we are romantic

Helen Fisher, as the researcher and biologist she is, has focused her investigation on detecting the mental processes which take place when faced with reactions of love and romanticism, among others. For this discussion, we define romanticism as the group of feelings and emotions associated with falling in love.

Fisher used several subjects who confessed to being madly in love. These subjects were put under scanners to find out which brain areas are activated while they thought about their loved ones.

Why are we romantic, according to Helen Fisher?

The reactions towards love were very diverse and in different areas of the brain. However, there was a certain cerebral region which was especially active. It is called the caudate nucleus. This is a primitive part of the brain which already existed in reptiles. It evolved even before mammals emerged millions of years ago.

Fisher also deduced that the rewards system of the brain is essential. When we look at a picture of the person we love, we release dopamine. Dopamine is the neurotransmitter the caudate nucleus segregates when it is activated, creating motivation and satisfaction. On top of that, the rewards system also activates other regions of the brain, as is the case of the septum or the VTA, the ventral tegmental area. Both of them are related to feelings of euphoria.

So, it is obvious we are romantic because we fall in love. It also seems logical to think that we fall in love because it makes us feel good. Something which is totally justified, since the rewards and motivation system plays a fundamental role in these processes.

According to Fisher, falling in love is an impulse more than an emotion or a feeling of love. This is because it takes a lot of effort to control it, and it is very difficult to make it disappear. We can always be romantic since we are exposed to falling in love. However, emotions can be more temporary.

Fisher also came to the conclusion that romantic love is fully centered on the gratification offered by the rewards system.  Meanwhile, emotions attach themselves to other objects, such as fear for example.

It was also established by this researcher that basic emotions are associated to several specific facial expressions. While romantic love lasts, there is no such association, since the facial expressions are so diverse.

As a summary, it was concluded that romantic love is a necessity. We feel the impulse to love and to be loved, because this makes us happy and we find ourselves feeling better, more fulfilled and motivated.

“There is always some madness in love. But there is also always some reason within the madness.”
-Friedrich Nietzsche-

For Helen Fisher, romantic love has evolved inside the human brain. Nowadays, it pours its motivation towards a specific person. She also says it has an intrinsic and close relationship with sexual impulses. Also, to attachment or the need to establish significant bonds with others.

As such, some commonly used phrases would be out of place. For example, “I am not romantic at all.”  And remember we are always basing our point on Fisher’s research. Being romantic, after all, is not a personal choice but part of our nature.

“Come sleep with me: we won’t make love, love will make us.”
-Julio Cortázar-

Nevertheless, whether it is an impulse, feeling, emotion or a mystery, romanticism and love are essential parts of our lives. Our brains know this by nature and evolution. This is why it’s advisable to pay attention to and enjoy the wonderful sweetness of being in love.

Link copied!
Interesting Articles
Psychology
7 Tips for Breaking Up with a Friend

Not every friendship lasts forever and, just like with breakups, sometimes the end of a friendship can be a painful…

Psychology
"Mom, I Don't Need You": Avoidant Attachment in Children

Attachment is an intense emotional bond that that plays a big role in our relationships. Although there are some types…

Psychology
Help! A Tantrum is on Its Way!

"I want candy!" Oh no! You know that this is not the time for your child to have candy, but…