Respecting Personal Boundaries: Why Do Some People Ignore Them?

Some people don't know how to respect personal boundaries. Sometimes, even if we go around dressed in our psychic and emotional armor, making clear where our boundaries are, there'll always be people who'll try to invade them on purpose. 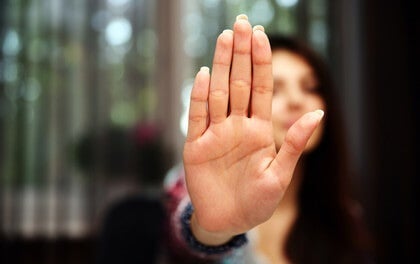 Respecting and protecting personal boundaries is a basic principle of health, balance, and well-being. However, as we well know, not everyone respects this. Why do some people ignore the fact that we have a right to personal privacy? Why do some people intrude, invade, and neglect our emotional, mental, and even physical barriers?

All the issues concerning our personal space are often as complex as they are sensitive. They are so, in the first place, because many of us find it difficult to set the boundaries and limits that safeguard our values, identities, and rights. Secondly, we also have to accept another fact that’s quite striking and disturbing at the same time.

Certain types of people seem to be incapable of identifying and respecting these social signals. Moreover, even if they do actually identify them, they immediately avoid them. This is even sometimes the case with partners, relatives, and friends.

The emotional relationship and closeness we have with certain people can lead them to think that they have the right to violate our personal boundaries.

An expert on the subject, Dr. Ernest Hartmann, explained to us in his book Mental Limits that certain psychological disorders and personality types are unable to identify (and respect) these social codes that are so basic to a healthy coexistence.

“Everyone should be respected as an individual, but no one idolized.”

People who don’t know how to respect personal boundaries

Respect is one of the most positive qualities of all to put into practice. It gives impulse, sense, and coherence to human relationships. It allows us, in turn, to create more dynamic, productive, and, above all, happy environments.

To respect is to tolerate. It’s an attitude that gives people the dignity to be who they are, and to have their own personal space and place in the world.

We’re sure that you’ll find this as inspiring as it is understandable. However, we don’t see it in our days as often as we’d like. Some people simply don’t know how to respect personal boundaries, and they violate them in a variety of different ways:

Let’s have a look at the reasons behind their behavior.

In a study published in the Journal of Occupational Health Psychology, psychologists Bulger, Carrie A., Matthews, Russell A., Hoffman, Mark E conducted several investigations in work environments and discovered that it’s very common to find that personal boundaries aren’t respected as much as we’d like in work contexts.

The people you’re closest to and the emotional factor

We pointed this out earlier. Those who tend to respect personal boundaries the least are often the ones who should be most aware of it. It’s common for certain relatives, friends, and even partners to assume that they have the right to ask for, or do, certain things just because they’re important to us.

Moreover, by circumventing these limits, we’re also putting ourselves to the test. Every concession we make means that they understand that there’s no problem and that there aren’t any consequences. They’ll even think that they’ll be able to go further the next time.

All of this will produce a slow eroding away of our character. When you say “yes” and give your permission when you really wanted to say “no”, your self-esteem will erode away.

All of this creates a great deal of frustration and guilt. Over time, the fabric of your self-concept becomes so damaged that the few personal boundaries you have left will tend to dissolve as well.

What to do with people who don’t know how to respect personal boundaries?

If someone doesn’t know how to respect personal boundaries, the first questions you should ask yourself are: “Have I made it quite clear to others where my boundaries are?” and “Have I been firm enough to enable other people to understand what they can and can’t do?

It’s clear that some people are more inclined to disrespect and consider that they have the right to infringe on those boundaries. However, you need to take into account a few factors regarding personal boundaries:

A life without limits is like a house without walls. We need them urgently, we need them in order to have shelter, security, and space to contain what we are and what we need. Therefore, if someone doesn’t respect those limits, we must firmly make it clear to them where those boundaries lie.

In conclusion, the origin of the issue of personal boundaries lies inside us. If we don’t first clarify them from within us, they won’t be clear to others.

Last but not least, it would be good to remember that you must protect them on a daily basis as the precious goods that they really are.

Whether you like it or not, there’ll always be someone waiting to find you with your guard down in order to get through those boundaries. Be sure you don’t let that happen.

Learning to Set Boundaries: Why Is it So Important?
Sometimes we prioritize the needs of others over our own and feel guilty if we say "no" to someone else's request. Learning to set boundaries is a priority! Read more »
Link copied!
Interesting Articles
Personality Psychology
Are Narcissists Born or Made?