The Reptilian Brain and Power Addicts 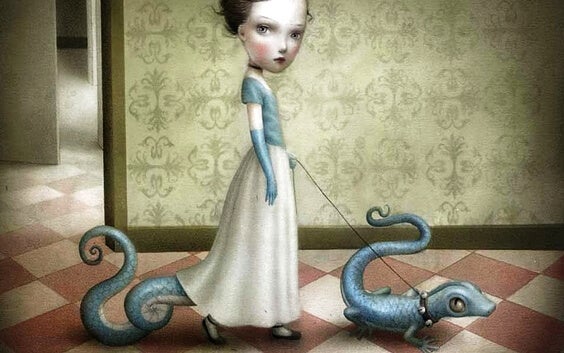 The reptilian brain and addiction to power go hand in hand. They are personalities ruled by emotions that are primitive, very aggressive, and have a lack of empathy, and the only thing that exists is the pleasure of domination and concern for self. In their minds self-control does not exist, much less concern for anyone else.

It was Paul D. MacLean who, in 1952, presented his theory of the evolution of the reptilian brain to explain emotional processes and their changes throughout our evolution as a species. According to the famous psychiatrist and neuroscientist, human beings of today have continued to maintain three basic structures: a reptilian brain, a limbic system, and a brain that is new and complex, responsible for higher functions, the neocortex.

“The secret of wisdom, power, and knowledge is humility.”

If it is true that neurologists agree with this concept that alludes to the biological evolution of our brain, it is no less true that they appear skeptical to the idea of a “fragmented” brain and a lack of harmony. They think that defending this last conceptualization would be like defending a radical, almost obsessive distinction between the right and left hemispheres of the brain, which has been trending the last few years.

We should view the human brain as a whole, any other way and we would be wrong. It is not a puzzle, but rather an organ with certain specialized areas that connect with others in order to perform certain functions as a whole, like an efficient machine that is always perfect. Now then, on occasion, the activation of one part can be highlighted, especially when talking of emotions.

People whose behavior depends on their instincts, leaving behind emotional balance and the control exercised by the limbic system and the neocortex, are acting under the opinion of a very concrete and exclusive part of our brain: the reptilian brain.

The reptilian brain and our irrational decisions

We have already discussed the fact that there is a very concrete personality type that is led exclusively by their reptilian brain: those who are addicted to territoriality, to control, domination or even aggression. Does this mean that everyone else has this deep, innate, and atavistic area of their brain?

Absolutely, and the experts in neuromarketing know a lot about this. The reptilian brain, that old and dark companion, also controls a lot of our basic functions, and our instincts. In fact, tasks such as breathing or the feeling of hunger and thirst are under its control, as well as the more primitive emotions of desire, sex, power, and even violence as a means of surviving.

The advertising industry knows that human beings are almost always ruled by the reptilian brain when deciding on one product or another.

For example, the smoker will keep buying tobacco knowing that they can die, and they will do it simply because they need to satisfy their addiction. In these cases, the neocortex, the logical part of the brain, does not have a voice nor a vote. So much so that the experts in neuromarketing know that the ability to make decisions in these instances does not reach 20%.

Comparing a despot who is controlled by the personality of a three year old can sometimes be a pretty accurate metaphor. That is for a very simple reason: for their lack of self-control when it comes to managing their emotions. David McClelland, well known motivational psychologist and famous for his theory on needs explains that human beings are basically characterized by three goals: relationships, achievements, and power.

There is a need in every one of us that stands out. Some will value relationships more, those who aspire to reach certain goals, and those who simply have just one obsession: exercise their power wherever they can.

These will be the basic characteristics of a profile associated with this type of personality:

In conclusion, although we may each know someone who fits this profile, we need to keep one thing clear: the reptilian brain, without a doubt, guides many of our reactions and choices. However, we should not allow it to take control of all our behaviors.

The theory of the ‘reptilian brain’ is vital in understanding the world of our emotions, and above all, to be conscious of the ultimate need to invest time and effort in proper emotional development. Just as we exercise our body and try to develop our intellect each day, we should be better at managing those urges, those primitive emotions that, although it may be hard to believe, rule a big part of our life.

Link copied!
Interesting Articles
Psychology
What Exactly Are Mood Swings And How Do They Affect You?

If there's one single thing that's true about emotions it's that they're universal...but every culture has its differences. A smile…

Psychology
Accepting People Just the Way They Are

Are you capable of accepting people for who they are? Or do you frequently experience anger, resentment, jealousy and other…

In Ken Robinson's book, "The Element," he tells the following story about painting: a school teacher was giving an art class and at the back of the classroom a little girl was…