How to Recognize a Habitual Liar 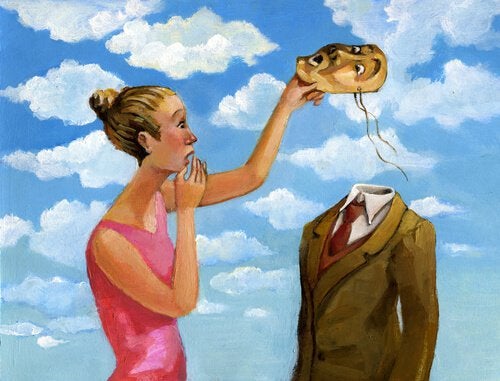 Statistically, almost all of us know a habitual liar. They don’t tend to acknowledge that they do it, since it’s not socially accepted, but they’ve perfected the art of lying with a lot of practice. Internally, they understand that lying can be a resource, as valuable as any other resource, as long as it doesn’t hurt anyone and nobody finds out about it.

Maybe they can’t deceive you anymore because you’ve known them for so long, but they do deceive other people they know or see less frequently. They know that the fewer details they give, the better. They know how to hide their face so that it doesn’t betray them. And they know that ambiguity is their best friend.

It seems as though people who mix reality with fantasy end up blurring the lines between them in their minds. They’re used to treating them both as the same thing, because both exist in their lives.

From white lies to compulsive lies

Ever since we were young, we were taught that if we lie, our noses will grow like Pinocchio, and that it’s a huge sin to not tell the truth. It’s not unusual that when we grow up, we embrace the idea that a little white lie “won’t hurt anyone,” until we gradually start to change our definition of reality.

Some people go over the limit of what we consider “normal” and become pathological liars. And then come the questions: do they do it on purpose? are they aware of it? are they aware of the harm they’re causing others? Unfortunately, in most cases no. And worst of all, if you try to help them, they’ll dismiss you or just tell an even bigger lie.

There aren’t that many scientific studies that can explain the reasons why people become pathological liars. But there are many performances that depict pathological liars on the big screen. For example, in Taxi Driver, Robert de Niro plays a young cabbie who writes a letter to his parents saying that he’s actually working on a secret project for the government, and that he’s engaged to a girl.

One true story of a pathological liar is that of Tania Head (whose real name is Alicia Esteve), a young woman born in Barcelona who claimed that on September 11, 2001, she was on the 78th floor of the south tower of the World Trade Center at the time of the attack.

She showed the supposed wounds that she suffered from the attack, and even narrated the events in extreme detail. In 2007, The New York Times revealed that she was a fraud, and later, Channel Four in Spain released a documentary about it called September 11th, I made it all up (11-S, me lo inventé todo). It still could not be determined what motivated her to lie. Some say it was to make her famous, while others say it was because for her, lying wasn’t that far from the truth.

How to spot a pathological liar

Beyond the stories that have been portrayed on the big screen or that have been discovered by the media, you might find yourself in front of a pathological liar without even knowing it. How can you tell if someone is blatantly lying to you? It might be a little difficult at first, and you might need a strange detail that doesn’t fit with the rest of the story to stop believing what they say.

It’s important to know that pathological liars have no control over what they say, or over the effects that result from their lying. Their lies are generalized, disproportionate, persistent, and most of them are spontaneous and not well-thought-out.

For example, pathological liars will constantly change their story. They retract something they said in the past or exaggerate their stories a lot (like in the case of the cabbie/CIA agent). They probably also have a more spectacular version of past events than you do. They live in a parallel reality and they’re not capable of responding to the contradictions, blaming memory problems for it.

Why should you watch out for pathological liars? Basically, because of their lack of control over what they say. They might have problems or anomalies in their brain or central nervous system. This isn’t an excuse for them to keep lying, it’s just something to be aware of when you come across a fantastical or inaccurate story.

But most of all, you have to pay attention to liars who don’t think about the people they’re lying to, who think that they’re just a means to get what they want, just like lying. These people are more dangerous than pathological liars. Why? Because they’re completely aware of what they’re saying! Their lies benefit them; they help them to rise up and step on others.

Lies are never good in any situation. Pathological liars aren’t “pardoned” for their disorder, but they do deserve our help. Invite them to consult a specialist and motivate them to follow proper treatment.

I Don’t Want Consoling Lies; I Want The Truth, Even If It Hurts

Maybe it's due to maturity, age, or even resignation, but at some point, everyone realizes that some arguments aren't worth it. At that…