Read About Boudicca, the Rebellious Queen

Have you heard of Boudicca, the fierce Celtic Queen? 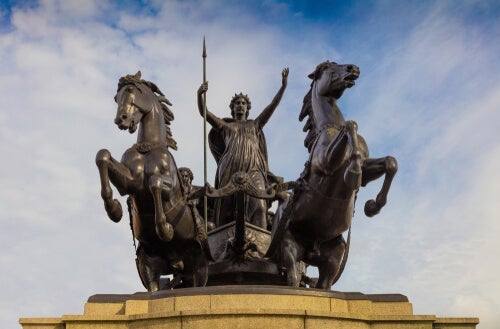 Her name means victorious, and she led the largest military force to confront the Romans in the British Isles. Keep reading and learn about the history of Boudicca; fighter, courageous, and a true personality.

In the year 61 AD, in the British Isles, was Watling Street, which was a huge highway that the Romans had constructed. The purpose of this highway was to connect Wales with the rest of the island. Boudicca was a tall woman for those times, with long brown hair and a strong build. She quickly ingested a deadly poison, perhaps backed by her daughters. According to Tacito, this was the end of one of the ancient tragedies.

This woman wasn’t just another legendary warrior queen of the Icenos Celts. Actually, they spelled her name Boudica in her native language and she was famous for uniting the rebellious tribes of the British Isles against the Roman invasion as did the Welsh leader Vercingetorix. Consequently, she won the right to be on the list of the great rivals of Rome. In fact, she joined the list with Virato, Anibal, Armino, and Spartacus, or who historians consider to be the Welsh leader. Sometimes, people confuse her legend with the one that her enemies have handed down.

After Julius Cesar’s famous conquest of Wales, the Roman Empire sought out new territories and conquests where they could take their legions and fulfill the ambitions of their generals. Since the legendary general planned the invasion of the British Isles, he was also probably interested in taking over the land of the Celtic Druids. However, the beginning of the inevitable conquest had already begun with the arrival of the emperor Caligula.

Shakespeare’s Cymbeline took place in these first battles. Later on, the emperor Claudius also continued the campaigns. At this time, some tribes united in order to protect themselves against the Romans, while some generals such as Caradawc carried out more revolts that were more or less victorious. This was when the conquerors founded Lodinium, today’s London, on the banks of the Thames River.

War continued in the forest with few results. Thus, their luck began to run out.

One of the kings who was aligned with the Romans was Prasugatus, of the Icenos Celts. In exchange for the protection and support of Emperor Nero, this monarch promised to give up his title and lands when his children died. However, we don’t know what happened to him after this time, but it was the trigger for the conflict. Because Roman law didn’t recognize inheritance for women, the daughters weren’t able to legally inherit from the king.

Most likely, the emperor could easily be dishonest, but didn’t want to alter the story of the wife of Prasugatos. This is when you find out about Boudicca, as a widow who claimed her rights according to the tradition of her people. However, they returned the queen’s resistance with assaults, abuse to her daughters, and death for her lieutenants. In the meantime, the Roman allies were confiscating land and attacking traditional places.

The rebellion had taken off. Because surrender wasn’t an option for Boudicca, she didn’t flee.

Boudicca won the right to have her name on the list of the great rivals of Rome, along with Viriato, Anibal, Arminio, Spartacus, and Vercingetorix.

Her name, or maybe her nickname, in those days meant Victorious and she would drive to her people in her carriage, encouraged by the indignities she experienced. What’s more, she was successful in getting a number of tribes and other warriors to unite with her. In addition, she led the forces that would confront the Romans in the British Isles. Even more impressive was the image of her flowing hair and paintings of war that were on her carriage. Actually, this is the image that you see on the statue in London that’s dedicated to her memory. Needless to say, for her enemies, it was a terrifying scene.

With her troops, she invaded and ransacked London and other cities in the south of the island, which the Romans occupied at that time. Even the Romans claimed that they showed no mercy, just like the Roman soldiers. She brutally destroyed the powerful Hispanic Legion, in one fell swoop that’s difficult to duplicate.

Her victories caused her followers to increase. However, after about a year of battle, the Roman general Suetonius managed to react.

In a narrow stony valley, there was a very unequal battle, with five to one Roman soldiers against the British. Even more uneven, the Romans were greatly disciplined and carried out the great final battle. Consequently, the Celts were unable to break the Roman formation, and had to quickly flee and retreat. So this ended their hope. Unfortunately, for every one hundred British casualties, there was just one casualty for the Romans and their allies.

Before the inevitable end, Boudicca preferred death to captivity again, being aware of what would happen if she was captured alive. Suetonius wouldn’t honor the defeated queen, but Britain never had a general like her again. In the end, she endured treason, indignities, and vengeance.

In spite of never having formed huge Celtic armies, there have certainly been many women warriors. These women also fought for life, liberty, and land.

7 Maya Proverbs About Living in the Present
In these ancient Maya proverbs, you'll find the kind of intelligence and insight that never loses its relevance. Read on to learn more! Read more »
Link copied!
Interesting Articles
Culture
Five Epictetus Quotes on Suffering

Epictetus was a Greek philosopher, but he spent a huge part of his life as a Roman slave. We don't know…

Cohousing is much more than just a trend. It's the future, a new way of living for retirees. A community…

Culture
3 Ways to Control Your Prejudices

Recently the media announced that Steve Jobs forbade his children to enjoy the use of some of his greatest creations, such as…