How to Manage Damocles Syndrome

Do you know what Damocles syndrome is and how to manage it? 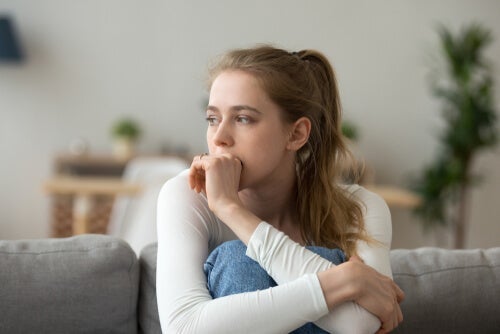 On several occasions, psychology uses the names of mythological or historical figures to identify and explain different psychological symptoms. An example of this is the Damocles syndrome, which describes how a person who’s overcome a very deadly and harsh disease can be extremely afraid of it reappearing.

This syndrome is very common in cancer patients. In the case of this disease, being afraid of recurrence is normal and even reasonable. However, when the fear that the disease will reappear becomes intense and affects daily life, we refer to it as the Damocles syndrome. It’s a situation in which worry and fear are pathological. In today’s article, we’ll explain what Damocles syndrome is and how to overcome it.

Why is the fear of relapse called the Damocles syndrome?

The syndrome’s name comes from Damocles’ story. He was a courtier at Dionysus II’s court and switched places at the table with Dionysus in order to briefly enjoy all of the benefits of being a king.

One night, during a banquet, Damocles looked up and realized that a sword was hanging above him by a very thin thread. From that moment, he was unable to continue enjoying the banquet because he could only think about the sword falling on him at any moment.

Something similar happens with cancer patients who, after overcoming the disease, develop an irrational fear of relapsing. In addition, the fear increases when they’re about to undergo routine exams because patients feel as if the disease is already back and they’re going to lose the normality they regained with recovery.

Damocles syndrome describes how a person who has overcome a very deadly and harsh disease can be extremely afraid of it reappearing.

Why does the syndrome appear?

Damocles syndrome appears as a result of a life experience that connects the patient’s mind with very intense fear. It develops as a combination of the low tolerance to uncertainty (that all human beings have) and the feeling of having no control over what happens to the body when recurrence of the disease happens.

These aspects mean that surviving an important disease can cause anxiety for the rest of the patient’s life. And the worst thing is that, despite medical check-ups with positive outcomes, the anxiety may not go away. In fact, a patient with this syndrome often believes that the check-ups aren’t effective and, therefore, don’t detect the relapse.

On the other hand, children who survive cancer are very likely to suffer from this syndrome. Thus, despite the fact that the survival rate of cancer in children has increased from 60% to 80% according to a study by the Mayo Clinic College of Medicine and Science (Cupit-Link, Syrjala & Hashmi, 2018), cancer diagnosis continues to spark the most primitive fears in patients.

Usually, what patients fear most isn’t death per se but pain and having to change their lifestyle instead. Thus, any sign that they might go back to the starting point is unbearably shocking and threatening to them.

How to deal with Damocles syndrome

First of all, it’s important to follow medical indications on how to handle each individual case. It’s not unusual that even family and friends make anxiety worse with their opinions or stories, even if they mean no harm.

Furthermore, working with the family is key. An article in the Journal of Cancer Education (Curda, 2010) discusses the fact that working with the patient’s family is very effective to help them overcome Damocles syndrome, since family creates a context that can appease the fear of recurrence.

If you talk about disease with a disease survivor without them asking, you’re preventing them from moving on.

Moreover, patients can also develop skills that help them focus on the present moment and deal with anticipatory concerns. Technically speaking, scientific data shows that, in many cases, there’s a probability of recurrence. But the problem begins when the patient exaggerates that probability or the anticipation, and it begins to affect daily life.

Finally, as with other syndromes, it’s easier to overcome Damocles syndrome with help from qualified professionals. Both therapy groups and specialized psychological care are fundamental tools for managing the fear of a possible recurrence.

Louis Bar Syndrome – Living in Permanent Déjà Vu
You know about déjà vu, but can you imagine experiencing it all the time? This is what happens to people with Louis-Bar Syndrome. Read more »
Link copied!
Interesting Articles
Clinical Psychology
Stress Can Change Your Personality