Rainer Maria Rilke, the Poet Who Taught us to See Light in the Dark

Rainer Maria Rilke was the poet who used sadness as a creative engine. In his verses, he taught people to be curious, to find the light in the dark. 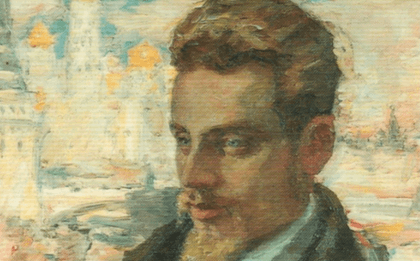 Poet Rainer Maria Rilke used sadness as a creative engine, as a muse for his verses. His art, and especially his letters, contain the magic of transformation. He taught people to find the light in the forest of darkness and encouraged them to overcome losses, be patient and curious in their inner values, and accept the solitary nature of man.

Biographers say that Rilke was an artisan of love and an expert in the field of chosen solitude. During his life, he had the habit of falling in love with many of the princesses, countesses, and duchesses of the Austro-Hungarian Empire. He was a wandering poet, a tireless traveler, who stayed in mansions and palaces and captivated everyone with his art, only to leave empty spaces once gone.

He became the classic transhumant who looked for benefactors to get him out of his poverty, as well as from loneliness, the eternal disease that always afflicted him. However, despite the existential roaming and emotional discontent that he left behind, Rainer Maria Rilke explored the feeling of loss like no one ever did.

Many people say that he found the greatest inspiration and stability with Lou Andreas-Salomé. This Russian writer, philosopher, and psychoanalyst shared that liberal spirit with him. Both for Rilke and her, the most important thing in the world was art, along with culture and knowledge. Love was an inspiration and a way of feeding writing and poetry. However, according to them, it came to a point where love overpowered everyone.

“The only sadnesses that are dangerous and unhealthy are the ones that we carry around in public in order to drown them out with the noise.”

René Karl Wilhelm Johann Josef Maria Rilke was born on December 4, 1875, in Prague. His father was a railway man and his mother, Sophie Entz, was the daughter of a well-positioned bank official. Interestingly enough, Rainer Marie Rilke’s mother was the one who instilled a taste for writing and poetry in him. This way, from an early age, he developed remarkable artistic talent thanks to his cultivated and refined mother.

Now, that delicate and cultured world fell apart when his parents’ marriage ended. It was then that his father took over his education path and sent him to a military academy. Fortunately for him, due to his health problems, he was able to leave that world and enroll in a university in 1895. He studied literature, art history, and philosophy in Prague and Munich.

During his stay in Munich, he met Lou Andreas-Salomé, the woman who changed his life. This Russian writer was fifteen years older than Rilke. She had been a lover of the most eminent intellectuals of the time, which inspired young Rainer even more. She was his counselor, his confidant, taught him languages, and was his muse for a long time.

Furthermore, this alliance allowed Rainer Maria Rilke to meet notable writers such as Leon Tolstoy. Later, with the beginning of the new century, he met sculptor Clara Westhoff in an artists’ colony in Worpswede. He married her and, the following year, after having his first daughter, he decided to leave them behind and go to Paris.

The consolidation of his work

In Paris, Rainer Maria Rilke met Auguste Rodin and worked as his secretary. This famous sculptor taught him the technique of objective observation as a form of creation. Likewise, he also befriended Spanish painter Ignacio Zuloaga. Both artists gave an impulse to his creativity and encouraged him to make incredibly subjective verses.

In this Parisian period, he wrote Neue Gedichte (New Poems, 1907), Requiem (1909), and the novel The Notebooks of Malte Laurids Brigge. The latter is an almost autobiographical work where he described very intimate and spiritual confessions about his personal experiences.

In 1912, Rilke stayed at the Duino Castle, near Trieste. He spent a few months with Countess Marie of Thurn and Taxis. She inspired him to create Duino Elegies. This period of calm and enjoyment ended abruptly with the outbreak of World War I.

Rainer Maria Rilke spent most of the war alone in Munich, until he had to join the army. Of course, this marked him. His open, romantic, and rebellious character became unresponsive. And from that moment on, he experienced a journey of travel where he found inspiration and calm after all the chaos war brought him.

The shadow of an end and frantic work

Reiner Maria Rilke’s protector bought a building in Switzerland for him to find some personal stability. Consequently, between 1922 and 1926, he lived a period of intense and almost frantic creativity. He suffered from leukemia and was aware that he was deteriorating.

However, feeling that the end was near impulsed his desire to steal more time from life, and he took advantage of it. He wrote many poems and letters. In fact, his lyrical legacy is as delicate as it is deep and as symbolic as it is intimate and inspiring.

During those last four years he had left to live, he developed a two-year relationship with artist Elisabeth Dorothea Spiro, whose son would later become the well-known painter Balthus.

Reiner Maria Rilke passed away on December 29, 1926, in the Swiss sanatorium of Val-Mont, at the age of 51.

It’s true that Rilke’s life was defined by that existential transhumance, which pushed him to go from city to city, from woman to woman. However, perhaps he had an overwhelming desire to run away from something deep inside, perhaps that something was himself. After all, sadness was his true and most faithful lover. For this reason, he defined this emotion like nobody else.

Rilke would compare emotions to the architecture of a house. He said that when melancholy and sadness enter a person’s body, they stay still. They transform into rigid constructions, such as buildings and walls. According to him, people have the power to transform themselves and to give birth to these gloomy constructions.

In fact, he wrote a famous letter to Sidonie Nádherná von Borutín, wife of writer Karl Kraus, after hearing about her brother’s suicide. “His life has now passed onto yours. If I could just convince you, my dear friend, that his influence hasn’t vanished from your existence. Just think how a lot of our daily lives misleads and troubles us, and renders another person’s love imprecise for us. But now he’s definitely here, now he’s completely free to be here and we’re completely free to feel him”.

Rilke never pointed out in his texts that time healed or got rid of the pain of death. In his poetry, he established that taking on difficulties in life is essential and that, for this reason, they shouldn’t be avoided. After all, adversities allow transformation.

Rilke wrote like David in front of Goliath. At first, his words seem light and insignificant. However, they have a huge impact. His aim was to teach us that loss, sadness, and regret are the other half of life: they’re shadows and we’re light.

“Let everything happen to you. Beauty and terror. Just keep going, no feeling is final.”

The Importance of Poetry
The strangest thing just happened. A poet just won a Got Talent contest in Spain. Surrounded by songs and amazing act, poetry won the day. Read on and find out about Cesar Brandon, the unlikely winner. Read more »
Link copied!
Interesting Articles
Literature and Psychology
5 Historical Novels that Will Broaden Your Horizons

Literature and Psychology
Peter Pan, the Story of the Boy Who Didn't Want to Grow Up