Ragnar Lodbrok is a legendary character whose popularity skyrocketed thanks to the Vikings series. Beyond the hero figure, the series raises some fundamental questions, such as a free will or the nature of one's destiny. This man is a remarkable character, who defies rules and proposes a series of really interesting reflections. Continue reading to find out more about him! 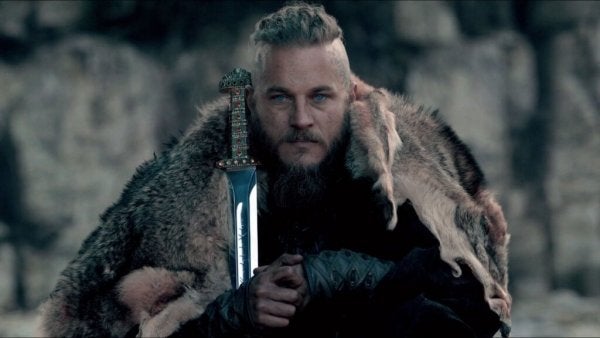 If it weren’t for the Vikings TV series (Michael Hirst, 2013), many people wouldn’t know about Ragnar Lodbrok, the Norse gods, and Viking traditions. Some are familiar with Viking culture for sure, but the series became a source of discovery for the rest and aroused much interest in that culture.

Initially produced for The History Channel, the series has been endorsed by historians due to its good documentation. It narrates the exploits of Ragnar Lodbrok, a warrior whose curiosity led him to explore new territories and eventually become king. The creators took many creative liberties, like most series, despite its historiographic sources. Also, considering that it’s based on medieval texts, the legendary component has a huge presence.

Ragnar is a fascinating character for various reasons, but a striking curiosity is his main characteristic and so is his eagerness to learn and evolve. This in spite of his evolution not always being positive. His figure is mythologized, like all heroes, so his courage is exceptional and his nature borders on immortality.

Oral transmission was essential in the Middle Ages, due to the prevailing illiteracy. The minstrels recited poems and songs in order to entertain themselves and each other. Even though many made them to this era thanks to manuscripts still in existence, their dissemination was mainly oral. The authors used verse because it was an easy way to memorize something.

Minstrels introduced episodes of epic songs, that is, medieval epics that narrate the exploits of a hero in order to extol their values ​​and virtues. There are several examples in Europe: Nibelungenlied, in Germany; La Chanson de Roland, in France; Beowulf, in England, and El Cantar de Mio Cid, in Spain.

The virtues of these heroes used to be associated with honor and bravery, but they were also marked by their faith. That’s why, in medieval historiographical texts, historical events intermingle with elements of a mythological-religious nature. Thus, there are examples such as the Estoria de España (History of Spain) or First General Chronicle of Alfonso X.

The Vikings series has its roots in one of the best-known medieval texts in Danish history: the Gesta Danorum. This text dates back to the 12th century and is attributed to the historian Saxo Grammaticus. It tells the history of Denmark and explains the Nordic religion. The character Ragnar Lodbrok appears in Gesta Danorum and also in some sagas. His life is unknown but he claimed to be a descendant of the god Odin. He managed to explore various Christian cities and had several wives and children who also performed great feats. Like father, like son!

Legend and reality intertwine in the history of Ragnar Lodbrok. In fact, it’s difficult to know when he lived because the different sources differ in the years of his reign. Professor Rory McTurk proposes that the current story about Ragnar is actually the combination of the lives of various Viking kings in his book Studies in Ragnar’s Saga Lodbrókar and its Major Scandinavian Analogues.

The evolution of Ragnar Lodbrok

Leaving aside the historiographic sources, focus your attention on the character reflected in the series. A character who, despite his humble origin, manages to gain power. Ragnar greatly evolves from the first episode to the last. Therefore, following the chronology proposed by the series, you can distinguish four stages.

Here, you meet a young Ragnar who lives with his wife Lagertha and their children Björn and Gyda. He’s a farmer, but he wants to explore new worlds, driven by his desire for knowledge. This desire will lead him to challenge the established, to disobey Earl Haraldson in order to achieve his goal: leading an expedition. Thus, you can observe a certain rivalry with his brother Rollo that, in the future, gains importance. Through his journey, he arrives in present-day England and comes into contact with Christianity. He despised it at first, although it eventually awoke his curiosity.

At first, Ragnar wanted to find a settlement in which to enrich himself and get some fertile land to cultivate. However, he met King Ecbert of Wessex, a character he shared curiosity and leadership with. The relationship between Ecbert and Ragnar became fundamental and, in turn, united them in their fascination with the Christian Athelstan. Then, Ragnar rose to power and eventually became king.
After that, his power continued to increase but, at the same time, he lost some fundamental elements of his life. His daughter Gyda died and he separated from Lagertha.

The Vikings’ decisions are strongly conditioned by the fortune teller‘s premonitions. Ragnar seemed to be destined to have many children and, since Lagertha couldn’t give them to him, he found the perfect companion in Aslaug to achieve his mission. Power began to corrupt him and his leadership faltered when, on one of his trips, his hometown is attacked. Furthermore, the settlement in England failed because it was a trap by Ecbert.

Despite their achievements, many expeditions are marked by tragedy. Ragnar also came into contact with drugs, something that led him to lose his leadership and self-control. In his last days, there’s deep disappointment and acceptance of death, his final destiny. At this point, the audience witnesses one of the most fascinating moments in the entire series. It’s the conversation between a dying drunk Ragnar alongside King Ecbert. Both, as equals, as ambitious people who were once successful but are coming to an end. This scene features one of the best-developed dialogues in which they discuss their beliefs, assume their destiny, and confess their sins.

Ragnar Lodbrok – destiny and free will

One of the most interesting issues that unfold throughout Vikings is free will. All Vikings go to the fortune teller to find out their future. The fortune teller, a key figure in the lives of the Vikings, answers their doubts with unclear and ambiguous phrases that give rise to countless interpretations and, in turn, determine the characters’ decisions.

By taking the fortune teller’s statements as true, the characters act according to them, to somehow motivate the fulfillment of the prophecies. Ragnar accepts these sentences at first. However, over time, a certain skepticism invaded him.

Contact with Christianity makes Ragnar doubt and question his faith. Christianity opened as a discovery, as a path to the knowledge he longed for. Ragnar is a curious character and, therefore, it isn’t surprising that he sought religion to understand the world and find his own destiny.

In his redemption, his characteristic curiosity only leads to disillusionment and skepticism. Ragnar no longer believes in anything, neither in the Christian concept of heaven nor in the Nordic Valhalla. At least this is how the audience sees it in his exceptional conversation with Ecbert. What would happen if there was no god? What if there’s nothing after death? This dialogue, worthy of independent analysis, leads to some transcendental questions. It makes you reflect on your own free will and destiny.

The conclusion on Ragnar Lodbrok

Finally, on his way to death, Ragnar maintained another exquisite dialogue with the seer (fortune teller) about the freedom of his destiny. He questioned the veracity of his claims. Ragnar Lodbrok is a character who, in addition to making you enjoy his exploits, leads you to an epic ending, loaded with powerful reflections that invite you to doubt and chart your own destiny.

“Power is dangerous. It corrupts the best and attracts the worst. Power is only given to those who are prepared to lower themselves to pick it up.”

Seven Viking Proverbs about Life
These seven Viking proverbs about life prove that this society wasn't just driven by a love for conquest. Read on to discover them! Read more »
Link copied!
Interesting Articles
Art and Psychology
Street Art, Muralism, and Muralists