Homer's Sayings: Seven Gems from the Genius of Ancient Poetry

In Homer's sayings, you can see a poet who was always seeking to capture the deep motivations of heroic acts and to highlight the great collective values: family, country, and friendship. 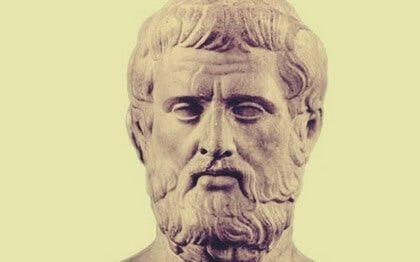 Most of Homer’s sayings come from either one of his two great epic works: The Iliad and The Odyssey. In addition, these are the most important works in Greek antiquity. Although we now know that Homer told imagined events, a lot of people believed that everything in them was real.

Homer’s life is mysterious. In fact, experts still don’t agree on whether he really existed or not. A hypothesis states that he was a made-up character and that the people of the time assigned him authorship of these great epic poems. There’s a fair amount of evidence to back this up. In this case, the poems would have been written by several anonymous Greeks.

Be that as it may, the truth is that many of Homer’s sayings have survived to this day. They reveal great sensitivity, genius, and wisdom. Here are seven of the most memorable ones.

1. One of Homer’s sayings about genius

This is one of Homer’s most important sayings. It’s very relevant today, even though it was written eight centuries before our era. It says: “Genius is discovered in adverse fortune; in prosperity, it’s hidden”.

The poet refers to the fact that the most difficult times bring out virtues and capacities that you often ignored. Adversity takes you to the limit and makes the strength and qualities that sometimes remain hidden within you appear.

Many of Homer’s phrases refer to collective realities, such as family, country, or a circle of friends. This poet attached great importance to these instances. This isn’t surprising when we’re talking about someone who embraced the ideals of Ancient Greece.

One of his sayings states: “Light is the task where many share the toil”. This means that knowing that one is part of a collective activity makes burdens easier to carry.

3. The injury depends on who causes it

This is one of Homer’s most beautiful sayings. He stated that “The arrow of a vile and cowardly man hurts little”. This refers to the fact that the pain of a wound, either in a physical or figurative sense, depends on who the aggressor is.

It’s a call to evaluate the damage according to the one who causes it. In other words, it’s not worth suffering due to wounds caused by someone from whom you’d only expect mean and nasty acts.

4. The big and the small

Poets throughout history, including Homer, have always reflected on the true value of the great and the small, the strong and the fragile. Sometimes, these concepts aren’t as obvious as they may first seem.

Homer says, “A small rock holds back a great wave”. This is a simile to highlight the fact that a firm obstacle, despite its size, can stop something that’s apparently much more powerful. What matters isn’t the size, but the consistency.

Another one of Homer’s sayings points out the following: “Any moment might be our last. Everything’s more beautiful because we’re doomed”. This is a beautiful quote that invites us to consider death and the end as something inspiring.

Sometimes, it’s not wrong to remember that everything ends, even life itself. If you’re aware of your finiteness, then you’re better able to appreciate every moment in life. We’re all doomed to die one day, and this should be a motivation to live life to the fullest.

This is a deep quote that’s full of content. It says, “The blade itself incites to deeds of violence”. Obviously, Homer isn’t referring only to a sword, but to any kind of weapon that can harm others.

He reminds us that the very existence of weapons is already a call to violence. Why do they exist if they haven’t already been considered for use? The mere presence of weapons evokes violent behavior.

7. Need is a teacher

On the subject of necessity, Homer says, “There’s no better thorn than necessity.” He’s referring to a lack of something in your life, a void, or a desire. The absence of these things in your life can create the energy you need to fulfill them. A need can motivate you.

He speaks of necessity as a “thorn” or a “sting” because it immediately calls you to action. It creates discomfort and a desire to relieve it. On the contrary, satisfaction will keep you in a state of passivity and non-action.

Little is known about Homer’s life. Some people have said that he was blind and that, at one point, people entrusted him with the task of compiling all these popular legends and sayings. Be that as it may, the truth is that his work and his sayings have been with us for centuries, and can serve as a guiding light for the future.

The Importance of Poetry
The strangest thing just happened. A poet just won a Got Talent contest in Spain. Surrounded by songs and amazing act, poetry won the day. Read on and find out about Cesar Brandon, the unlikely winner. Read more »