Queen Boudica, also known as Boudicca or Boudicea, represented a series of European tribes that decided not to submit to the Roman Empire and fight for what belonged to them. 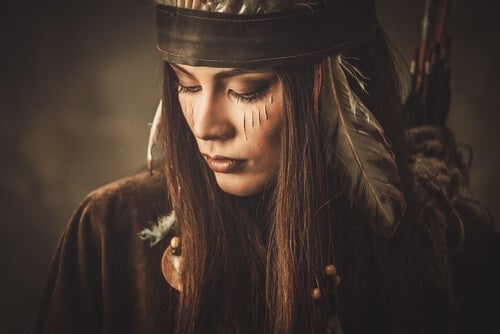 Queen Boudica (also known as Boudicca or Boudicea) is a fascinating historical figure who, over time, has become a very powerful archetype. Queen of the Iceni and leader of the Resistance in Anglia, Boudica led a huge army against the Roman legions to free Britain from the Empire.

She was, for centuries, the symbol of the fight against injustice exercised by patriarchal Rome on the feminine values of pre-Roman Europe. Boudica embodies all the qualities the Roman patriarchy wouldn’t consent to in women, and which it ended up forcibly nullifying.

This Celtic queen was a free, fierce, and wild woman. She prayed to pagan gods and was the leader of a huge army of blue-painted savages who followed her to their death. Many of the classical warriors presented themselves as young virgins, but this isn’t the case with Boudica.

She had several daughters who fought alongside her against the Roman invasion and in defense of her people, her men, her women, her culture, and her religion. She became the archetype of the vengeful woman and mother who brings fire and blood to those who harm her own.

Unlike Joan of Arc and other later heroines, Boudica never gave up her status as a woman nor adopt male customs. Neither did she hide her female nature behind mysticism.

Boudica was a woman from head to toe. She never renounced any of her female characteristics, not even what’s become known as a symbol of femininity: motherhood. This is how the Celts understood the nature of women, as equal to men, with their own characteristics. An idea which was far removed from the Roman patriarchal vision of women’s roles.

The encounter with the Romans

Boudica was born around 30 AD, during the reign of Emperor Claudius. At this point, the Roman invasion had already established many posts in the British Isles. She was probably the daughter of a noble family, and, in her childhood, she stood out for her intelligence, athletic body, and beauty.

At the age of 18, she married Prasutagus, king of the Iceni, one of the Celtic tribes settled in the eastern part of the islands.

The Iceni enjoyed considerable independence from the Romans. This was thanks to agreements reached with the emperor that involved the payment of substantial taxes. The Celtics were of Druidic tradition, seeking harmony between humans, nature, astrology, and magic.

They were brave warriors who believed in reincarnation, didn’t fear death, and were fierce in battle. They painted their bodies blue and fought almost naked. Their use of magic in battles, along with their fierce appearance, terrified Roman legions.

Boudica had two daughters with the king and served as queen consort. The Celts considered women to be equals who could hold political and religious office. Prasutagus knew that, for the Romans, who followed the Greek culture regarding the role of males, this wasn’t the case.

In an attempt to protect his family and his people, he consented to an agreement with Roman procurator Cathus. In this agreement, he would give half of his fortune and his kingdom to the Roman Empire. He would leave the other half to his daughters and his wife, who would take over the role of Queen of the Iceni when he died.

Boudica’s husband died shortly after the agreement was made. At around the same time, Roman Emperor Claudius also died. His heir, Nero, didn’t respect any of the agreements with the Celtic tribe. The new emperor didn’t recognize Boudica as the queen of the Iceni and her daughters as heirs. The truth was that he wasn’t prepared to recognize the power of any Celtic woman.

In a grotesque display of power, the Roman procurator attacked the Iceni tribe, turning many nobles into slaves and appropriating all the possessions of Queen Boudica and her people. In an attack of utter contempt for the Celtic queen, he ordered her to be publicly flogged. At the same time, she was forced to watch the atrocious scene of her daughters being raped by all the Roman centurions in his charge.

Through this mass rape, the Romans demonstrated their principles and their imposition of power by force. In addition, they boasted of their masculinity and supposed superiority.

Then, Queen Boudica gathered several Celtic tribes together. She became their commander and prepared them to attack the Roman invaders. Some sources even estimate that she had some 230,000 warriors under her command.

Queen Boudica and her army’s attack

The Iceni, under the command of Boudica, decided to attack Camulodunum, the village where Cathus resided. The Roman procurator had asked for reinforcements in view of the imminent attack by the powerful British resistance army. However, it was of little use to him.

Boudica and her men annihilated the reinforcements sent from Londinium and the 2,500 centurions of the Ninth Legion sent from Hispania before reaching Camulodunum. Once there, they executed Cathus and massacred the inhabitants, as the Celts, unlike the Romans, held no prisoners.

Immediately, Boudica led her army to Londinium ready to give it the same fate. Suetonius, the Roman general and new governor of Britannia, decided that Londinium wasn’t defendable and abandoned the city. The army and the Roman nobles were also able to flee.

When Boudica and her army arrived, Londinium was abandoned to its fate and completed undefended. The Celts took the city and, without hesitation, quickly headed for Varalamium, which they also conquered. It’s estimated that, within a few weeks, the army led by Boudica took over the three main Roman settlements in Britain.

Suetonius openly admired and respected Boudica and deeply hated Nero. However, he was finally forced to assemble an army capable, by their sheer numbers, of confronting Boudica’s men and women. After a bloody and epic battle, the Roman legions subdued the Celtic army.

Some authors say that Boudica died in battle, but we don’t know this for sure. She was honored with funeral rites as Queen of Britain and her remains were hidden forever. Her life became a powerful legacy as an archetype representing rebellion against submission.

Boudica and the men and women of the Icenian army knew that they were going to die during the last battle against the Romans. But they also firmly believed in reincarnation and that this battle wouldn’t end their existence.

Perhaps they’d have to wait a few more centuries, but eventually they would return to fight again, and this time they’d win forever.

The story of Boudica is the story of many other men and women from the tribes of Atlantic Europe who fought against the invaders of the Roman Empire, an empire based on patriarchy. The tribes only wanted to defend what legitimately belonged to them.

They fought in defense of their lands, their culture, and their traditions in Britain, Gaul, and Iberia. In short, a fight for their identity and against submission.

Boudica’s story, which ranges from the historical to the legendary, shows us that, in the past, there were also women and brave mothers who showed skills far beyond the domestic sphere. Boudica is a woman who stands out among the infinite number of male names written in history, a symbol of struggle and, also, courage.

Marcus Aurelius, a Biography of the Philosophical Emperor
Marcus Aurelius was the "last good emperor". He was a figure who left us works of great philosophical interest such as his Meditations. Read more »
Link copied!
Interesting Articles
Biographies
God's Crooked Lines by Torcuato Luca de Tena