The Qigong practice is a millenary practice for balancing the energy of the body and mind through a series of simple postures and movements. It also involves doing self-massage and meditation. 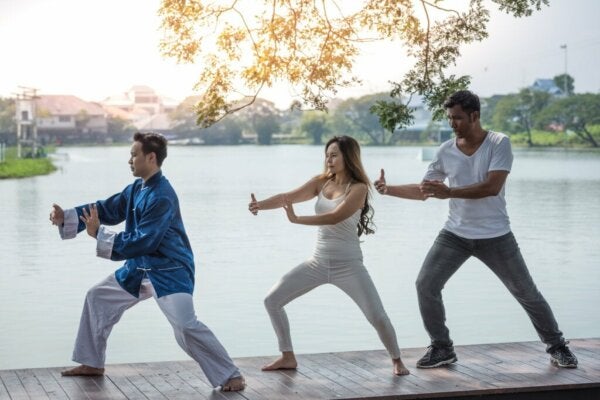 The Qigong practice, also known as Chi Kung, aims for awareness regarding the application and optimization of body energy. It’s an ancient traditional Chinese medicine practice that dates back approximately 2,000 years.

The practice of Qigong requires breathing, movements, and visualizations, the same as traditional Chinese medicine with acupuncture. According to this perspective, there’s health when there’s abundant vital energy, which is called “Chi” or “Qi”. Such energy must circulate freely, without stagnating or dispersing, maintaining a balance. According to Qi Gong, there should be no excess or deficiency of Chi in any part of the body. The result is good physical and mental health.

“Qigong is the art and science of refining and cultivating internal energy.”

The practice of Qigong

Anyone can practice Qigong, regardless of their age and physical condition. This is because it’s based on static postures, dynamic movements, seated postures, marches, and sounds. Unlike yoga, it doesn’t require great skills to achieve the aforementioned postures.

In Qigong or Chi Kung, you don’t need a teacher. You can learn it and practice it on your own. It’s also guided by the principle of “little and regular”. That is, the practice during short periods of time, but constantly. Typically, it requires 15 to 30 minutes per day.

The most common practice of this art begins with a self-massage, followed by a joint release. Then there’s a static pose, then a dynamic movement, and finally meditation. Most of the movements come from the Taoist tradition. Others are of Buddhist inspiration, and some are modern.

Qigong seeks to balance the body energy. Therefore, it nourishes and reinforces it. Estimates indicate that the benefits of this practice become noticeable after three months of daily routines. From the point of view of traditional Chinese medicine, Chi Kung can:

In the Chinese philosophical tradition, which is at the core of that country’s traditional medicine, you can classify all phenomena in the universe according to Yin and Yang characteristics. Yin corresponds to the feminine and pertains to cold, rest, internal, soft, receptive, fragile, and similar concepts.

Yang has to do with the masculine and is associated with heat, movement, strength, activity, hardiness, etc. Similarly, for traditional Chinese medicine, there’s an essential form of energy called Chi, which must flow through an energy system composed of a network of meridians.

Disease happens when Chi doesn’t flow. In other words, when its circulation stagnates or it’s interrupted or dispersed. For this reason, this kind of medicine aims to get this energy to flow properly and to regain the Yin-Yang balance. It achieves it through acupuncture, massage, diet, herbal medicine, and Qigong.

Chi Energy: The Life Force of the Oriental World
Chi energy is defined as a vital force that flows constantly through our bodies, and if it's blocked or altered, then it leads to disease. Read more »