Psychological Violence: Like Drops of Water on a Rock 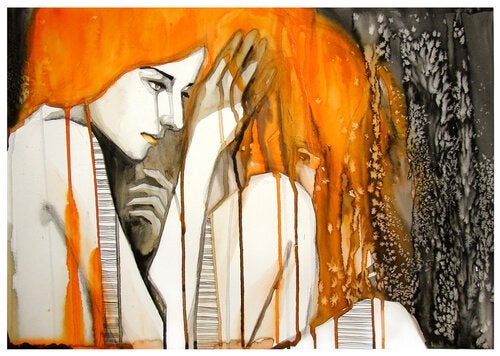 When we think of the word “abuse”, we automatically come up with the mental picture of a physical beating. However, physical violence is just one kind of violence. In this article, we are going to talk about another kind of violence that can exist simultaneously or by itself. We are talking about psychological violence.

Psychological violence within and outside of the home

Psychological violence can take place within the home especially, but also at work, in the media and in society in general. In many cases without us even noticing, without us being capable of appreciating its “subtlety”. But the same cannot be said for the damages it causes.

Psychic aggressions are usually maintained over time, and they act like drops of water on a rock. Constant, continuous, causing erosion that is difficult to mend. Erosion that is hard to appreciate if we only observe it in the moment.

Something similar happens with psychological violence. The aggressor gradually carves fear and dependency into the other person’s mind.

While this kind of aggression can take place in any environment, the most common is within the nucleus of the family and above all within a relationship. One person makes the other feel like they are worthless. They ridicule them in front of others, insult, judge or threaten them.

The victim slowly loses the will and courage to go out, to frequent certain places, to have friendships, to see their parents and family members, etc. From this kind of violence, dependency is born. The victim feels like they are worthless. Hence, they therefore depend on their partner for everything.

It is commonly believed that by applying excessive discipline to children, we contribute to making them strong and disciplined adults. But this is not the case. This kind of strict education only produces frustrated children, youngsters and adults, full of complexes and a very low self-esteem.

Parents who mentally attack their children don’t realize that they are forging a behavior that could turn against them when the children grow older. Especially during adolescence, which is already a complicated time for them.

Why is psychological violence not reported?

In order to answer this question we have to keep various factors in mind and pay attention to specific circumstances. However, there are some common or frequent patterns in this type of situation.

First of all, it is not reported because many times the victim isn’t aware of the violence. The attacker has been so “precise and calculated” that it is not perceived as something bad. Instead, it is thought of as something everyday, normal and even expected. The typical “he does it because he loves me” is very commonplace.

On the other hand, if the person has noticed this behavior in the person, it is something very difficult to prove (unlike physical beatings). In the majority of cases, the family and friends of the victim notice changes in the behavior or attitude of both parties. Moreover, some of the verbal aggressions can take place in the context of a social gathering.

Also, psychological violence is not reported out of fear. At times the victim has to return to their home, and live with their abuser out of fear that something will happen to their children or some member of their family.

Lastly, the lack of commitment from the authorities and the lack of legislation in many countries regarding domestic violence, both in physical and mental forms, make it very difficult for the victim to report the situation.

What can you do to escape the abuse?

So that the victim can change their situation, a good option is to contact people who have experienced a similar situation. There are organizations and foundations that can help them. Get some distance, as much as possible, from the abuser, so that the problem wont have tragic or irreparable consequences.

Also, therapy and talking with the people closest to them may be what the victim needs to get by. With the support of their loved ones and the lessons of what they have lived through, it will be easier to move forward. Let’s not forget, on the other hand, that by reinforcing the self-esteem of the people we love, we are contributing to making them stronger against this type of aggression.

Link copied!
Interesting Articles
Psychology
I Got Tired of the Way You Loved Me

Some people have a condition called hyperhidrosis (or excessive sweating) that almost always leads to embarrassment in social situations. Thus,…

Psychology
A Behavioral Approach to Depression

Depression is an illness that affects the mind, but in most cases it develops due to a series of external…

We're constantly learning new things about learning disabilities in children. The more society has advanced, the clearer it has become that…