When a person wants to quit smoking, in addition to applying appropriate techniques to overcome the physical addiction, it'd also be helpful to explore the deeper reasons that lead to dependence and the meaning that tobacco has acquired in their life. 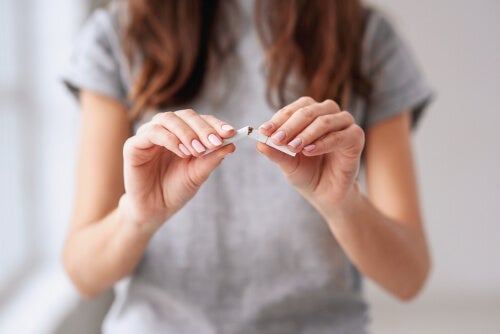 People sometimes can’t quit smoking because they aren’t psychologically prepared to do so. Your will may be strong but your strategies weak. Perhaps there’s a lack of clarity about the reasons why you should quit or a lack of conviction about the benefits of quitting.

Tobacco dependence is physical and psychological. You don’t just smoke out of habit but there are reasons behind it that we can’t ignore. Cigarettes, despite their harmfulness, also provide some form of well-being or relief, even if it’s fleeting. For the same reason, quitting smoking gives the impression that you’re not going to receive those benefits anymore.

Nicotine is a very addictive substance. Thus, quitting it demands considerable effort. However, in many cases, it’s also an exercise in intelligence.

Not everything, however, has to do with organic issues. When a person starts smoking, they develop a whole series of patterns and behaviors that revolve around tobacco. Therefore, quitting smoking also means leaving behind all these behavior patterns.

Smoking behavior patterns can be associated with social contexts, loneliness, that cigarette after a meal, and anxiety, etc. Thus, an intelligent response would be to reduce exposure to these contexts as much as possible, especially in the first few days.

“Take care of your body. It’s the only place you have to live.”

The reasons why people smoke

Psychoanalyst Gustavo Chiozza makes an interesting analysis, both of the reasons for smoking and of the reasons for the intolerance to smokers, which is so widespread these days. In his opinion, tobacco is a kind of “spiritual food” for smokers. He points out that isn’t so much about the smoke that goes into the body but rather the fire that starts it.

He points out that a large number of people start smoking during puberty and adolescence, and usually do so by “stealing” cigarettes from their parents or other adults. Thus, smoking is originally linked to transgression. In a symbolic sense, it’s a “stealing of fire”, which Prometheus did to make himself equal to the gods. In adolescents, this act is equivalent to entering the adult world.

This initial theft, and its consequent entry into the adult world, also generates an unconscious feeling of guilt. This increases when we see the increasing intolerance towards smokers everywhere we go.

When the transgression and the guilt are firmly linked with the adult world, then the desire to smoke increases, as does self-punishment. As a result, compulsion appears, and this is very difficult to get rid of.

The reasons to quit smoking

To return to the previous point, anxiety, guilt, and self-punishment tend to affect smokers. Very often, all of this has its origin in adolescence, where tobacco was symbolically a declaration of entry into the adult world. If that adult world was rejected or generated very strong tensions, then the smoking habit becomes more deeply roots.

Finally, although it may seem a bit absurd, people smoke in order to say “This is me”. And, when you say it, you feel guilty. Almost all smokers suffer from anxiety and guilt, coupled with a sense of reassurance when they smoke. It’s pleasant and rewarding but self-destructive at the same time.

The reasons to stop smoking are almost as important as the reasons to use tobacco. If the motivation is taken to be censorious, then the person unconsciously assumes that they’re re-living the limitations they experienced as children among adults. This is why many people fail to quit smoking. Deep down, they experience it as a surrender of their rebelliousness and of giving up something important in their lives.

Experts believe that approximately 60% of smokers try to quit at some point in their lives but only about 10% of them succeed. In most cases, this is because there’s an unconscious force that eventually overcomes the conscious reasons for quitting.

It may be a good idea to go beyond these typical techniques to quit smoking and start by understanding what smoking means in your personal life. In particular, it’s helpful to remember those early moments when you first got into the habit. What were the circumstances surrounding that moment? What did smoking feel like? And what does it feel like now? When do you most want to smoke?

Of course, tobacco addiction has a very strong physical component, and there are many effective aids for dealing with this organically. What sometimes fails, though, is the motivation to quit.

By exploring what smoking means in your life, you may be able to understand the self-destructive axes of the habit. And, perhaps, a greater desire to stop harming your body will emerge.

What’s Hiding Behind a Smoking Habit?
It seems strange that smoking, which isn't exactly pleasing to our noses or lungs, is so common. What's hiding behind a smoking habit? Read more »

George Kelly developed personal construct theory, as well as the technique of fixed role therapy. According to this approach, you build…

Victims of a traumatic experience go through a lot of pain and suffering. The worse part is people's attitudes towards…