Psychogerontology is a branch of psychology that has advanced a lot in recent years thanks to the increase in elders in various countries. Here's what psychology can do for them. 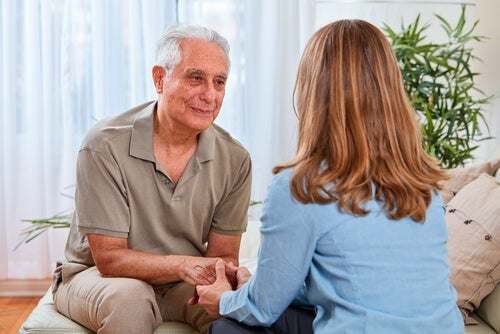 Psychology is a science that studies many different areas, but especially those related to affective, cognitive-emotional, and behavioral fields. In addition, it’s divided into various branches and all of them study different things. One of them, and the one we’ll be talking about in this article, is psychogerontology.

Psychogerontology doesn’t have a historical milestone to consider an “origin”. Rather, to find it, we must consider two things. For one, the scientific psychology that originated with Wundt in 1879 and Metchinikoff’s gerontology in 1903.

On one hand, today, we’re witnessing a phenomenon that’s giving more and more relevance to psychogerontology. Basically, developed countries increasingly have an aging population. In a way, there was an increase in life expectancy but there was also a drastic drop in the birth rate in many countries. Spain is a clear example of these two events.

These circumstances have fueled the need to study older people in a deeper way. Thus, there have been many improvements in interventions aimed at this sector of the population.

On the other hand, of the many researchers who’ve contributed knowledge to psychogerontology, one of the most outstanding figures is Professor James Birren. He said that, just as gerontology was concerned with old age, the psychology of aging should study the processes that occur during the life cycle and the processes of stability and change. In addition to the cognitive, motor, and emotional variables that the elderly entail.

Now, the proper name of those professionals dedicated to psychogerontology is psychogerontologists. If you’d like to become one, you first have to study psychology and then specialize in this area.

In addition to this, they research the market to study the needs of the elders. For example, through gerontological programs and projects.

The benefits of this field of study

In addition, psychogerontology offers selection, training, and prevention of stress in caregivers. It’s wonderful because they don’t only think about the elders but about those who work hard to keep them healthy.

The fact that there’s a branch of psychology dedicated to the elderly is great news for an increasingly broad sector of the population. Through psychogerontology, it’s possible to approach elders in a more accurate way. On the other hand, for the psychologist, it’s a precious job opportunity due to the great value that can be contributed to society from this specialty.

Emotional Intelligence in Seniors
Studies show that getting older can improve your emotional intelligence. Seniors feel fulfilled by focusing on the positive and valuing their relationships. Read more »
Link copied!
Interesting Articles
Clinical Psychology
A New Perspective on the Nature of Psychosis

In psychology, a very familiar term is social contagion. These are situations in which emotions spread and eventually trigger extreme…