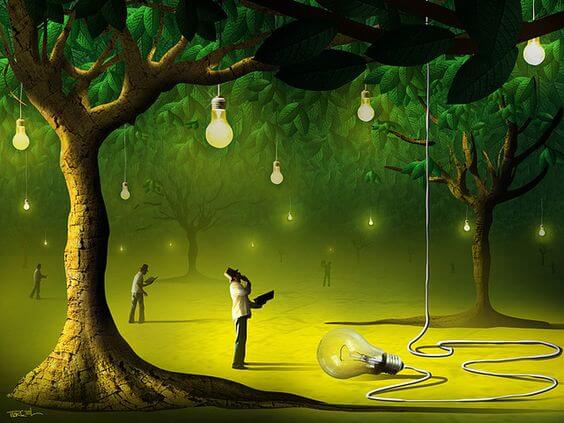 Problems also represent new opportunities, which is a truth that has been proven over and over again. It’s also something we say to give our friends encouragement during times of difficulty, but that we forget when we’re the ones who are stuck in the mud.

Problems aren’t just ways to challenge our intelligence and reasoning. If only it were that way! The difficult part is that they also activate our most instinctive emotions: fear, anger, prejudice, apprehension, intolerance…

“We can’t solve problems by using the same kind of thinking we used when we created them.”

As a result, we end up drowning in a glass of water. We lose perspective on what we’re capable of doing, and become paralyzed with fear, avoid the problem, or simply do nothing but complain. Maybe we’ve been programmed to see problems as a threat that we can’t escape from. Maybe we forget that problems are challenges and that if we face them, we can improve ourselves. If this were untrue, what about all those men and women who have turned their problems into opportunities?

Elizabeth Murray turned her problems into a source of light

Elizabeth Murray, who was born in the Bronx, NY, was condemned to have a difficult childhood by her environment. Her parents were 70s hippies who succumbed to the world of drugs. At the time of her birth, they were both addicts with little hope of recovering, as they were using cocaine and heroin.

Liz Murray and her sister ate ice cubes and toothpaste, because that was all they could find to fill their stomachs. To make matters worse, her parents developed AIDS and her mother passed away. Her father moved to a homeless shelter and her sister went to live with a friend. Liz was left to live on the street at only age 15.

But she worked with what she had. At age 17 she went back to high school, and on a visit to Harvard she decided she wanted to go there. And she did, thanks to a New York Times scholarship. Today, she is a successful psychologist who understands human pain better than anyone else. She published a bestselling book, and her life was even brought to the big screen.

Arturo Calle, a man who turned austerity into his greatest strength

He is the most successful Colombian businessman in the world of men’s clothing. His father died when he was just a kid and left behind a family of 8 small children and a widow. To help the family earn money, he started working at a young age. He knew the value of every cent he had, which he developed into a particularly austere way of life.

When he got a little older, he got a job where he earned a minimal salary. Even so, he spent a few years saving tirelessly, until he had enough money to open a small clothing business. His motto: save and never accumulate debt.

This is how he turned out to be a successful businessman who now has stores all over Latin America. The best part about the products he sells is that they’re reasonably priced for their level of quality. Arturo Calle doesn’t owe a cent to anyone, which keeps the cost of production low. He was also considered one of the 5 best employers in Colombia, because all of his employees have their own house thanks to the company’s help.

What Wilma Rudolph had was much more than a problem. Since the time she was born, her life was fraught with difficulties. She was born prematurely, and they didn’t think that she was going to survive. She did, but at age 4 she contracted double pneumonia and polio. Also, her family was poor, especially if you take into account the fact that they had to take care of 22 children.

Her left leg became practically useless as a result of the polio, so she had to walk with the help of an orthopedic device. Despite all this, at age 9 she decided to try to walk without help, and she succeeded. At 11 years old, she joined the basketball team at her school and for the first time, she trusted in her physical abilities. When she was 13, she decided to train regularly as an athlete. In her first race, she came in last place, and the same thing happened multiple times over the next few years.

After a few years of practice, she finally won her first race, but she didn’t stop there. She qualified for the Olympic Games in Melbourne in 1956 and won the bronze medal for the United States, and in 1960 she won two gold medals at the Summer Olympics in Rome. This triple Olympic medalist overcame a serious injury caused by polio and reached the highest achievement in the athletic world.

Link copied!
Interesting Articles
Culture
Believing in Ourselves Is a Matter of Will

If you don't do it, nobody will. Believing in oneself is not a matter of pride but of dignity. We…

Controlling compulsive buying is very challenging for some people. Those who like to shop sometimes find it difficult to control their…

Culture
Balloon Breathing: Help Your Child Calm Down in a Fun Way

Counterdependency is a new word that describes a phenomenon that's also relatively new: affective detachment due to fear. For many, the normal human thing to do is strengthen bonds with others.…

Culture
6 Beautiful Quotes to Think about Every Day

We are hugely mistaken when we think that only special days are worth living intensely. Every day, no matter how…