A flow state, in positive psychology, is the mental state of operation in which a person who performs an activity is highly energized and focused by it. Also, they're fully involved and thoroughly enjoying the process. 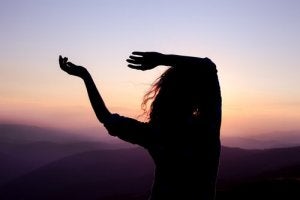 A flow state is about finding the perfect balance between enjoyment and challenge. Here we speak of those moments of creativity and performance that endow you with positive feelings.

Challenge is a fundamental part of your physical and psychological well-being. There’s no happiness without adversity. Therefore, it’s a lot harder to find an activity pleasant or rewarding when you consider it beneath you. Or when it’s well above your capacity.

It’s about those experiences in which you’ve been able to immerse yourself and enjoy specific tasks. Forgetting everything that has nothing to do with it. There seems to be a distortion of time –it either accelerates or it stands still.

It’s a state in which consciousness works at a different level. The mind and body synchronize. They merge with a certain activity. Some refer to it as “being in the zone” but in psychology, it’s simply “flow.” And once you’re in the zone, you will never forget what it feels like. It doesn’t matter if you write, paint, write music, or do sports.

Flowing with life is a unique experience in which consciousness works at a different level.

The flow theory was brought about by psychologist Mihaly Csikszentmihalyi, (Csíkszentmihályi Mihály in its native Hungarian) although the concept is in fact ancient. It’s not a mere experience what makes you feel good.

Going into the zone (flow state) involves sacrificing the resources that you would usually allocate to your peripheral attention in a focused and sustained one. A sacrifice that results in emotional well-being.

There are several dimensions necessary for getting into the zone. You need to have a specific objective. It’s also more likely when your abilities match the requirements of the task at hand.

Entering a flow state requires a significant degree of concentration. It’s the point where conscience and action merge and become one. You feel in control over what you do, that is, you’re not anxious about failure.

And so, as your self-consciousness disappears your ego vanishes as a result. Further, you have an altered perception of temporal space, an autotelic experience. The ultimate goal is to do the activity for the simple pleasure of doing it.

The chemistry of a flow state

But, what exactly happens to you when you enter a flow state? Research tells us that it’s a psychological, rather than physical, experience. Your brain’s inner workings are mainly responsible for it. On this note, different areas involved in the flow state are identified.

The mammalian prefrontal cortex is in charge of evaluating risks, planning, analyzing thoughts, suppressing impulses, solving problems and making decisions. There’s a zone in this area directly tied to any negative feelings you may harbor against yourself: the medial prefrontal cortex.

This latter one, together with the amygdala (which processes negative feelings that arise from experiences) are both uninhibited when you enter the flow state. Then, a time distortion takes place in the parietal lobe.

Conversely, the brain area associated with motivation, part of the nucleus accumbens, activates when you enter a flow state. Also, the areas linked to the perception of control that one has while being in the zone, seem to activate.

The production of endorphins is stimulated, as it does during meditation, and fear is replaced by a feeling of euphoria. This, in turn, increases the levels of gamma-Aminobutyric acid (GABA), a neurotransmitter that increases concentration by decreasing one’s perception of external stimuli.

Training your mind to flow with life

Being in the zone requires an energy expenditure of which you may not even aware of. And so, when you leave it, then it’s normal for you to feel happy but tired as well. Also, it’s a state in which you usually enter when performing tasks over which you have most of the control.

It’s also easier to enter the flow state when your brain’s in shape because you exercise your intellect in various ways. When you move away from that which is vulgar or pointless.

This is when you trade watching TV for a book, a museum, or some meaningful and enriching cultural endeavor. Or, even when you just set apart some “me time.” When you allow yourself to absorb beauty in the form of colors, art, music, etc.

A flow state is always tied to positive psychology; however, many misinterpret the concept. It’s associated with happiness although it’s easily accessible during moments of despair.

Further, it would be interesting to perform studies that could tell us more about the relationship between this state and the tragic moments of our lives. Sometimes, entering the zone is also the only way to distance oneself from reality and to focus on a different one. Particularly when this reality is hard to manage.