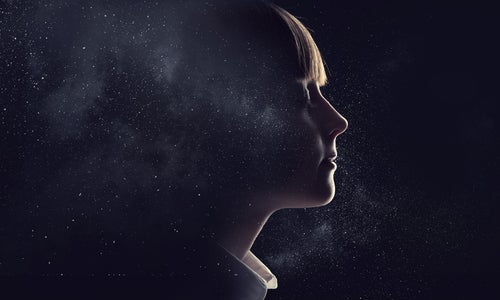 There are many kinds of crises, and some of them are of the existential variety. Maybe you’ve fallen in that strange abyss where you can’t stop wondering what the point of it all is. The world, life, your own existence. In the 1960s, a psychiatrist named Kazimier Dabrowski coined the term “positive disintegration” to explain this common psychological phenomenon that affects highly intelligent people.

This concept continues to be interesting and insightful. Dabrowski observed that the minds of gifted children, teens, and adults seemed to sometimes drift into a kind of defragmentation process. Their minds had to collapse (in a figurative sense, of course) in order to put themselves back together in a different way after finding answers and explanations to their deepest doubts and giving meaning to their lives.

Dabrowski chose the name of this existential depression well. Disintegration, because there are parts of the mind that fall apart. Beliefs, thought patterns, emotions, and values that cease to be valid. These things break apart and come back together in a different way. It’s like updating the operating system on a computer. Your mind develops and acquires new skills and abilities.

That’s where the “positive” aspect of this concept comes into play. When you put yourself back together, you’re a better version of yourself. Dabrowski believed that this process leads to taking steps forward in human development. In fact, this Polish personality psychology expert defined five specific steps. These are the distinct stages that individuals with high IQs tend to experiment.

Positive disintegration: becoming your authentic self

Dabrowski’s theory, formulated over six decades ago, is still relevant today. More specifically, it’s a very useful framework for understanding how the evolution of personality building works for gifted people.

According to this approach, the mental development of someone with a high IQ goes through a series of concrete transitions. The trajectory of those transitions is always upwards. In other words, the individual is evolving, become more cognitively and emotionally capable. The curious thing, however, is that each step forward is the result of a crisis. Evolution happens when that child, teen, or adult goes through a highly frustrating and disconcerting experience that causes significant suffering.

Existential doubts usually trigger these moments, when the individual questions why they feel different from other people. They become introspective and start to wonder why the world is the way it is, why people do what they do, and what the future holds. They also feel more aware of their own mortality, among other things.

Mendaglio and Tillier (2006) analyzed this in their article “Dabrowski’s Theory of Positive Integration and Giftedness: Overexcitability Research Findings”. One of the things they found in their research was that, on average, gifted individuals experience overexcitability. In other words, they have an active imagination, tend to feel emotions more intensely, and are more impulsive.

Those factors make these moments of existential crises very problematic. Consequently, they’ll usually need some kind of intervention and support to overcome their suffering and grow from it. Gifted individuals that are experiencing these crises often stop being productive at work and school during these periods in their lives. They’ll also probably have problems with their social relationships.

Without further ado, let’s take a look at Dabrowski’s levels of positive disintegration.

This first level of development happens in early childhood. Here, the gifted child has their first crisis. Their instincts and selfish behavior mix with their interest in what’s in their immediate context.

The desire to explore, discover, manipulate, and learn leads them to mature sooner than other children.

During this stage, the child or pre-adolescent needs to feel accepted by their peers. However, they don’t achieve that connection, which triggers the first serious existential crisis.

Positive disintegration also occurs when an individual suddenly feels unsatisfied with who they are and what they’ve achieved up to that point.

Gifted people usually reach this level in the prime of their youth. It leads them to reformulate their goals and leave some projects and ideas behind. They feel at odds with themselves but overcome it by coming up with new solutions.

The fourth level of personal development for gifted individuals, according to Dabrowski, happens when they realize that they’ve spent a lot of time focused on themselves and their needs. Perhaps it’s time to open up to other people, be more altruistic, and work towards the greater good. During this stage, they adopt higher, more universal values.

Responsibility, kindness, altruism… In this last stage, the individual starts to fix their gaze on more abstract, higher-level principles. They’ve worked on helping others and contribute through their work and effort. Now, they want to leave their mark on the world. Their focus shifts to promoting progress.

Lastly, there’s one more important thing to mention about positive disintegration. This model encompasses a very hopeful, and sometimes unrealistic, view of the world. Many people won’t make the kind of progress that Dabrowski talks about. These changes don’t happen automatically. Plenty of people get stuck, caught up in crises that lead to anxiety or depression.

Thus, it’s important to seek professional help during these moments of doubt and personal crises. Only then will you be able to achieve good mental health and well-being.

Culture
33 Quotes by Einstein That Will Make You Think