Many consider William James a pioneer, the father of modern psychology. But he was also a philosopher, thinker, doctor, physiologist, and metaphysician, among other things. He's also a figure of great relevance and interest in almost any current discipline that deals with knowledge. 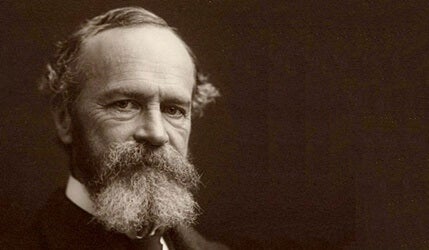 Psychology pioneer William James is more than just a remarkable 19th-century philosopher. Prior to his arrival, American society associated psychology with mere future divination practices and mind-reading. This field became a scientific discipline thanks to the experimental psychology laboratory he founded and ran at Harvard, thus rising as one of the great pioneers in this area.

Many still regard James as the foremost American philosopher and father of modern psychology. His extensive works span multiple disciplines, ranging from epistemology, education, metaphysics, religion, mysticism, anatomy, and, of course, psychology.

How William James came to stand out and become one of the leaders in this area of ​​knowledge was certainly something as unique as it was significant. He spent a big part of his youth suffering from multiple ailments, strange diseases, and physical limitations, such as partial deafness. All these conditions and discomforts even made him consider suicide at some point throughout his life.

In that state of apparent melancholy, he concluded that what afflicted him was nothing more than a disease of the mind and the soul. Hence, he decided to investigate other areas to seek answers and found them in disciplines that eventually gave him great revelations: philosophy and psychology.

“The deepest principle of human nature is a craving to be appreciated.”

The education and personal aspirations of William James

James came to this world in 1842 to a well-off family interested in the arts, science, and other intellectual pursuits. His parents were among the cultural elites of the time, so they gave their children the most well-rounded education possible.

He spent much of his childhood traveling the world with his family. At first, he had an artistic penchant for painting. Later on, he acquired an interest in science. In 1861, he began his medical studies at Harvard University.

At that time, his brother, Henry James, was already beginning to excel in the literary field while his sister, Alice, was doing so in the field of history. At some point, William decided to postpone his medical studies to join naturalist Louis Agassiz in a scientific expedition through the Amazon.

That trip spanned for two years and gave him plenty of time for personal reflection. Medicine wasn’t his only field of work and study. This is because his mind and innate curiosity about the brain and human behavior asked for much more. He longed to delve into more areas of knowledge.

The scientific study of the human mind

William James spent his entire academic career at Harvard. Firstly, as a professor of physiology, and later as a professor of anatomy. Then, he moved to the psychology and philosophy departments. He published his most important work in 1890, just after opening the first experimental psychology laboratory at the university.

This rather pragmatic perspective of psychology as a science made William James one of the forerunners of functionalism. Such an approach later gave rise to behaviorism.

“All attempts to explain our phenomenally given thoughts as products of deeper-lying entities (whether the latter be named ‘Soul,’ ‘Transcendental Ego,’ ‘Ideas,’ or ‘Elementary Units of Consciousness’) are metaphysical.”

Consciousness according to William James

William James wanted to deepen and delimit the study of consciousness through experimental physiology. He did so alongside other experts, such as Henry Pickering Bowditch and James Jackson Putnam, with the purpose to try to locate it in some area of ​​the brain.

The study of emotions

The legacy of William James, pioneer and philosopher

William James died of heart failure at his New Hampshire home on August 26, 1910. He was 68 years old and left behind an immense, varied, and fascinating legacy for psychology.

He established the philosophical school of pragmatism and functional psychology. In addition, he established empiricism in his scientific studies. Finally, he was one of the first psychologists to delve into the study and understanding of the brain.

Thanks to pioneer William James, the first pillars of these psychological disciplines arose and continue to advance today.