Why would a good person commit an atrocity? Why would an intelligent person do something so absurd and irrational? These and other questions must've been on the mind of Philip Zimbardo when he conducted his famous experiment in Stanford prison. However, he contributed to psychology in many ways beyond that experiment. 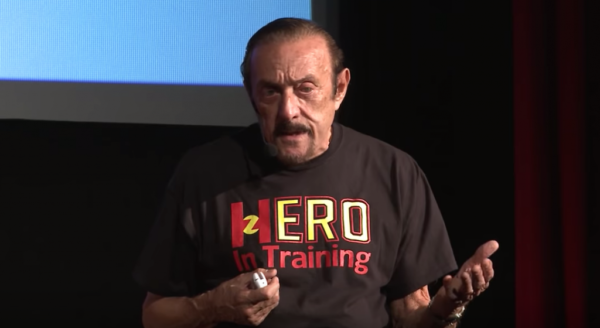 Philip Zimbardo is a well-known and controversial social psychologist and researcher. His Stanford prison experiment was only the beginning of his interest in discovering why people change and behave in very unexpected ways in certain situations.

What leads a good person to commit an atrocious act? Why can an intelligent person do something completely absurd and irrational? These are some of the questions this psychologist has been trying to answers his entire life. In fact, his research already found many answers.

Actually, his contributions to psychology are quite significant. The effects that absolute control can have on people’s consciousness or the consequences of cult and group thinking are some of them.

He was also actively involved in the study of shyness, motivation, and human perspectives on the passage of time. Continue reading to find out more about one of the most controversial psychologists of all time, whose contributions to contemporary studies are significant.

“If you put good apples into a bad situation, you’ll get bad apples.”

Philip Zimbardo was born in New York on March 23, 1933. There’s limited information about his childhood but historians say he was a brilliant student. He simultaneously graduated from Psychology, Sociology, and Anthropology in 1954. Just one year later, Yale University awarded him a Ph.D. in Psychology.

He taught for a brief period of time at Yale when he graduated. However, he left Yale to become a psychology professor at New York University, where he practiced until 1967.

He taught for a year at Columbia University until 1968 and then became a member of the Department of Psychology at Stanford University. He remained there until 2003 and was an active lecturer for a few more years.

This experiment rose to popularity in 1971. In it, Zimbardo randomly assigned two different roles to the group of students who collaborated with him in the experiment — 24 males. He used the Stanford University basements.

Philip created a pseudo prison in which some of the subjects adopted the role of prisoners while others acted as guards. He interrupted the experiment after six days, although it was originally scheduled for two weeks. The extreme behavior and reactions of both groups were the causes of the premature interruption.

Individuals in the role of prison guards quickly began to exhibit sadistic and cruel behaviors toward the “prisoners” of the experiment. Similarly, the prisoners started revolts and many of them quickly developed depressive and hopeless behaviors.

Whether or not this study was unethical is still being debated today. Despite the voices raised against it, Philip Zimbardo later expanded on the results of this experiment by drawing parallels with the Abu Ghraib prison. He used all of this information in his book The Lucifer Effect: Understanding How Good People Turn Evil.

An inventory on time perspective

Philip Zimbardo designed a test to measure a person’s perspective on the past, present, and future. It measures five different attitudes related to the passage of time:

This idea considers that people’s lives are determined by their perspective on the passage of time. Thus, he listed a series of paradoxes that influenced human personal and cultural behavior.

In general, the paradoxes refer to how unaware people are of the powerful effect that the passage of time has on thoughts and emotions. Personal experience determines the human perspective on time. In addition, the latter constitutes a group and cultural perspective that shapes nations.

This man had many achievements besides the Stanford prison experiment. In 1977, he created the Shyness Clinic, a center to help people overcome their shyness and other obstacles to their functioning in social settings.

His work as a consultant and researcher at this center lasted several decades. Mind control and learned group behavior were other areas of study he dedicated many years of his life to.

In addition, he was appointed president of the American Psychological Association in 2002. He also founded the Heroic Imagination Project, an organization that studies and encourages heroism in daily life.

Furthermore, he was behind an acclaimed television series entitled Discovering Psychology, a series that sought to bring the public closer to the principles and theories that psychology studies. As you can see, he was a prolific author who went into diverse areas that allowed him to deepen his research. In fact, he published numerous books as a result.

You may not be aware of it but his contributions to psychology are significant. Thus, it’s hard to delimit them. In fact, most of his studies contributed data and evidence that have been a starting point for several investigations.

Philip Zimbardo conducted bold research and managed to enlighten the world with many surprising things about human beings. It’s definitely added to the understanding we have of one another as individuals and as part of society.