When Our Pet is the One Who Rescues Us 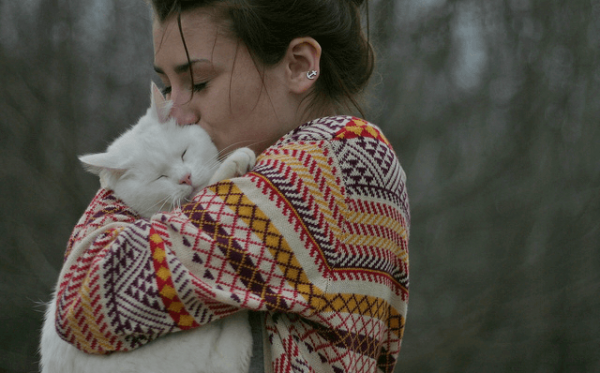 We know about rescue dogs. But sometimes it goes the other way: an animal rescues a person. Dogs and cats that, literally, save the lives of their “humans.” Because they come into their lives when they need them the most. In the darkest, toughest times, when the presence of that little creature helps turn their focus outwards and shake off their  sadness, fears, and solitude.

Social psychologists confirm that pets are natural objects of human attachment. It’s always been like that. Dogs have been man’s best friends since way back in our evolutionary history. Back then, the first social groups humans formed already included the company of some type of canine.

“It’s compassion and respect towards animals and Nature what truly makes us human.”
-Albert Schweitzer-

Edward Osborne Wilson, a well-known biologist and ethologist (animal behavior scientist), coined the term “biophilia”. It is the affinity we humans have for other life forms.
Among our ancestors, groups of humans that had one or more dogs with them had a greater chance of surviving. The intimate bond that the human being established with dogs helped them understand the cycles of nature. It also aided in their search for water and food. They were loyal companions when it came to hunting, and company in times of solitude.
Ever since, our brain reacts to them the same way. Even knowing that an animal is not a human being. We secrete oxytocin when we’re close to dogs or when we give them a hug. Oxytocin is the love hormone. Compassion and an impulse to care for another are activated when we visually connect with animals.

It’s magical, there’s no doubt. It’s clear that even though we adopt HIM, he’s the one who rescues US.

The Afghani dog who “rescues” his human friend

We could tell a thousand stories of animals who have saved human lives. However, today we’d like to delve into a very special one, where a dog emotionally “rescues” a young soldier based in Afghanistan.

Our protagonist is named Craig Grossi. His first day in a helicopter in the district of Sangin could not have been harder. It was nighttime and within in a few hours, the Taliban has already attacked the spot, fencing in his entire unit.

He thinks his life is going to end right there and then. It is a very long night, finally turning into a more peaceful dawn. The fighting has ceased, and Craig has the opportunity to look around. Everything is destruction, dust, and shrapnel.

And in the middle of all of that chaos and cars melted into twisted metal, there is a dog with a big head and a skinny body. He’s resting. Craig’s first instinct is to call out to him, but then he stops himself. He had heard stories of street dogs that attacked people.

Finding a friend in the chaos…

But this dog is different. As soon as he sees the soldier, he comes over right away. Just to be with him. Craig Grossi didn’t die that day. Instead, he found a friend who would refuse to be separated from him, who lived with his unit and supported him during times of great difficulty. Craig named him Fred.

Their bond was so strong that even when they transferred him to a different zone, Craig and his comrades secretly hid Fred in the helicopter so “the team” wouldn’t be separated.

Finally Craig acknowledged the fear he had that his dog would get hurt in the middle of that chaos. So he reached an agreement to have his friend Fred secretly flown to the United States to be with his parents. And that’s what happened.

However, only a couple of days after his friend had been shipped off to his new home, Craig was hit by a missile and suffered a brain injury.

The whole time he was in a coma, this young soldier never stopped dreaming about his four-legged companion. In some sense, he was never far away. Then he recovered and could finally fly home to his family and Fred.

He saw how everything he went through with his friend could serve a greater purpose. For 2 months he traveled all over the United States telling his story. Today these two friends make a great team, giving speeches and classes. He talks about overcoming and the bond between people and animals.

Today animal-assisted therapy is becoming more widespread and having great results. Service dogs are an effective stimuli for children with autism. They are also not uncommon in nursing homes, where trained dogs regularly visit to give their selfless love. They also offer interaction that dementia patients respond very well to.

Respecting animals is an obligation. Loving them is a privilege.

Now in a closer and less clinical way, pets are of course indispensable objects of our attachment. In fact, according to a study conducted in 2011 and published in the “Journal of Research in Personality,” this type of attachment is one of the healthiest and most positive on every level: physically, emotionally and cognitively.

A cat or a dog knows how to connect with his “human“ with just a look. For those of you who have never had a pet, that magical and unexpected touch is amazing. You think: “It seems like he really understands me!”

An animal won’t get your problems or the reason you’re disappointed or frustrated. They also won’t have any solutions to your existential questioning. Pets only perceive your current emotions. The “here and now” where they can identify your joy or sadness — in an instant.

Animals don’t care about anything else. All they want is for their needs to be met, and maybe a bit of love.

Because the truth is that’s all that really matters. Being well, being at peace, and having good friends around you. Both two-legged and four-legged friends.

What Animals Teach Us
We tend to think that human beings are different from animals, and we believe that we are responsible for teaching them. But it's actually the opposite! Read more »
Link copied!
Interesting Articles
Psychology
The 8 Best Books on Psychoanalysis

Psychoanalysis is a fascinating field: its theories and hypotheses are just captivating. Although that's true, some books on psychoanalysis, especially by…