Personality and Spirituality - The Relationship

Throughout history, spirituality and religion have played a fundamental role in human lives. Psychology continues to try to determine their relationship with personality traits and how they influence each other. Find out more in today's article. 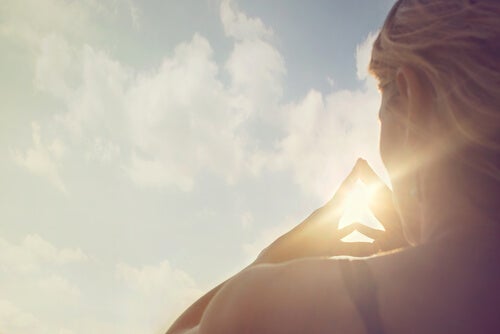 Although the study of spirituality and religion isn’t new, a branch that falls under the name of Psychology of Religion and Spirituality is only 20 years old.

Some of its goals are to shed some light on the relationship between personality traits and spiritual beliefs. How they evolve throughout the life cycle and their adaptive importance for certain types of personality. However, the main existing drawback is to reach a consensus on what spirituality and religious tendencies are.

One of the most-used definitions says that spirituality is the innate motivation that drives and guides behavior towards the construction of a broader personal meaning. In other words, the belief that there’s something out there in the universe that’s bigger than oneself. In this sense, some authors propose this could even be a personality factor.

Similarly, religion is a set of beliefs, values, and practices that are explicitly governed by a social or institutional tradition. And it depends on education and culture. Thus, the spirituality of a person influences and modulates their religious tendencies.

Even though there are different models that classify personality differently, the studies are generally based on the five-factor model of personality (FFM). According to it, one can define personality according to its degree in each of the following dimensions:

As we mentioned above, spirituality consists of an innate motivation and a belief that there’s someone greater than oneself and determines one’s behavior.

In some research, spirituality has been related to the five personality factors, such as extraversion, openness, and kindness.

However, other authors argue that spirituality has nuances that don’t include other people (simplicity, detachment, or loneliness). Therefore, they consider that spirituality should be the sixth personality factor.

Depending on the degree of spirituality present, a person would show certain behavioral tendencies and ways of perceiving the world around them.

Religious tendencies contextualize a person’s degree of spirituality. Given that spirituality is more of a personality factor, most studies associate different personality traits with religiousness.

In this sense, even though approximately 60% of studies find no relationship, there are indications that greater religious spirituality is related to a lower presence of neuroticism.

Likewise, 40% of studies indicate that more religious people display more responsibility. In other words, a greater presence of objectives and the ability to achieve them in a planned and organized way.

87% of researchers noticed that people with a higher degree of religiosity are friendlier. When it comes to openness or the ability to have greater imagination and curiosity, 42% of studies found a positive relationship.

However, some authors believe that, if the effect of spirituality was out of the equation (that is, that everyone has it to the same degree), then greater religious tendencies would be associated with narrow-mindedness.

The relationship between personality and spirituality

A study analyzed the relationship between spirituality, religiosity, and personality. In it, they found that all personality factors, except openness, are related to the degree of spirituality. This result was remarkable in traits such as pleasantness and responsibility. However, a religious tendency was only associated with these last two factors.

More specifically, they saw that when the approach to religion occurs in search of answers to existential questions but the feeling of faith and spiritual meaning were low, religion had more to do with high neuroticism and openness. Similarly, it’s related to low extraversion, pleasantness, and awareness.

The research also found that when people approach religion in a more instrumental way, because it gives them security or a source of socialization, but the intellectual search and faith were low, then it’s more related to low neuroticism, pleasantness, and openness.

Personal Development
Seeing Beyond What's There

Personal Development
Stop Saying Yes When You Want to Say No

Personal Development
Living Abroad: Would You Adapt Well to It?

Living abroad seems easier now than it did before, and the world seems to get smaller as the days go…