Today, we'll talk about the types of cognitive distortions that pathological players most frequently fall into and propose some treatment alternatives. 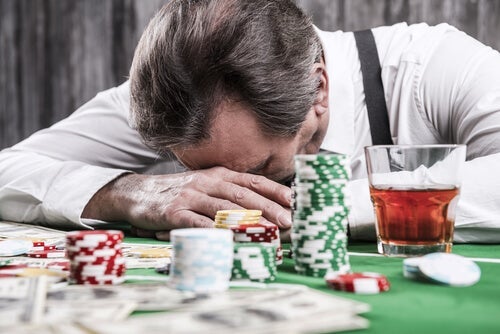 Cognitive distortions are frequently biased cognitive treatments. In addition, when we talk about mental disorders such as those in pathological gamblers, then these become more important. Because, in many cases, said distortions either just originated or are among the factors that contribute to them.

Gambling is one of the most primitive activities in the history of mankind. You can find the names of famous characters who were obsessed with gambling when you peruse history books. Emperor Claudius, Fyodor Dostoyevsky, and Giacomo Casanova are just a few examples.

However, it wasn’t until 1980 that gambling began to acquire greater relevance when the fact that it can lead to serious problems became clear. That’s when the DSM-III decided to include it as a diagnostic category.

When we talk about pathological play, we mean games of chance. Video games would, therefore, not fall into this category, although this doesn’t mean that these players can’t become addicted.

You can recognize a pathological gambler we’re about to refer to, according to the diagnostic manuals, by a loss of control over the act of playing. Similarly, by the establishment of a dependent relationship. The speculator will continue to play even when they’re aware of its negative consequences.

Currently, pathological gambling changed from being classified as a disorder of impulse control to the category of addictive disorders of DSM-5. This is because it has many of the characteristics of an addiction.

The fruitless efforts of a risk-taker to resist the urge to play often lead to the total decline of their personal, family, and/or professional goals.

The cognitive bias of pathological gamblers

Pathological gamblers harbor certain irrational beliefs or cognitive distortions in their mind that keep them addicted to the game.

Cognitive distortions are biases we enact when processing information. They’re not necessarily pathological since we all have them to a greater or lesser extent. Instead, a person should modify them if they’re too frequent and prevent them from moving forward. The typical distortions of pathological gamblers are:

How to help pathological gamblers

The first step to overcoming a cognitive distortion is for a pathological player to notice said distortion. Cognitive biases aren’t easy to detect because they’ve been programmed over time. One way to detect them is by asking a gambler to fill some sort of self-registration document when they feel the urge to play. If you explain it correctly and the person does it properly, then they’ll be aware of their cognitive distortions.

To do so, you could show them the most typical biases incurred in by speculators and ask them which one they identify most with. Once you do this, the person must understand that such cognitive distortions are largely responsible for their motivation to continue gambling.

To modify them, it’s important to question and exchange them for thoughts based on objectivity and reality. This is achievable through Socratic questioning and guided discovery. Here, a person asks themselves what proof or evidence they have to maintain a certain thought. For example, “How am I so sure that my method is infallible? Does winning or losing really depend on me? What’s the evidence?”

After practicing Socratic questioning with themselves and noticing the fallacy, a person will be more predisposed to changing their way of thinking. To do so, they have to review all the asked questions and come up with a rational answer. It’ll become their mental mantra from that moment on. For example: “I have no control over a machine that works randomly“, “I’ve won sometimes, but the data indicates that I have lost much more so the wins don’t compensate for the losses”.

With practice, the gambler will become aware of the uselessness of their behavior. They’ll realize that their problem only creates new problems. In the end, the gambler should be able to lose interest and stop gambling.

New Addictions: Classification and Intervention
In addition to the addictions that everyone is familiar with like drugs or gambling, there are addictions that have only recently come onto the scene. Read more »
Link copied!
Interesting Articles
Clinical Psychology
How Lockdown Affects the Brain

Delusions are characteristic of mental or neurological disorders. Thus, they help diagnose psychotic disorders. Psychiatrist and philosopher Karl Jaspers was…