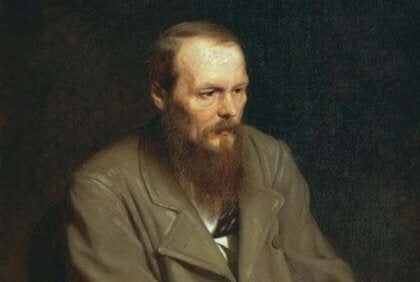 Fyodor Dostoyevsky’s quotes are the true reflection of a writer that had a stormy life, along with sensitivity and an out-of-this-world talent. His work revealed human nature through the times.

His authoritarian father was tortured and then murdered, and his mother passed away from tuberculosis when he was merely a teenager. All this made Dostoyevsky almost lose his mind. He managed to recover, and maybe that’s why his literature has the depth and beauty of someone who has lived so intensely.

“But men love abstract reasoning and neat systematization so much that they think nothing ofdistorting the truth, closing their eyes and ears to contrary evidence to preserve their logical constructions.”

It would be impossible to make an entire compilation of great phrases penned by Fyodor Dostoyevsky. There are plenty of writings to choose from. We’ve selected only a few of his quotes that best represent his attitude towards the world and life. Read them now!

Speaking the truth, a subject addressed in Fyodor Dostoyevsky quotes

One of Fyodor Dostoevsky’s quotes reads: “‘Nothing in this world is harder than speaking the truth, nothing easier than flattery”. Nowadays, this is a somewhat obvious statement. However, it was a revolutionary assertion in his time.

Dostoyevsky lived in the Russia of the past, a place where classism, authoritarism, and repression reigned supreme. When these aspects prevail, speaking the truth becomes a crime and hypocritical flattery, the rule.

The two halves of life

Fyodor Dostoyevsky’s quotes talk about a man who reflected passionately about life. The ironic part is that he was always surrounded by death. He had to deal with the death of his parents, his wife, his daughter, and his brother. In fact, he himself got the capital punishment, but it was lifted sometime later.

Ethics are another recurring subject in Fyodor Dostoyevsky’s quotes. This one, for example, reads: “I submit to ethics, but I cannot comprehend in any way why it’s more glorious to bomb a besieged city than to murder someone with an ax.”

It’s a very interesting and profound reflection. If someone kills a man, people call them “a murderer”. But if they kill hundreds of thousands, people call them “heroes”. How are these ethics configured that they reject an individual evil but applaud a collective damage? How is it that there are circumstances in which murderers are role models?

Dostoyevsky’s life was filled with vicissitudes. Two of the hardest moments of his life were the death of his newborn daughter and the death of his second wife. He lost his path and developed a strong gaming addiction. At the same time, these experiences gave him precious material for his work.

His suffering and its consequences remain condensed in one of his most interesting quotes. It reads: “Everything seems stupid when it fails“. It clearly reflects the emotional state that prevails after failure. This shows how it alters perception completely, taking away all meaning.

If Dostoyevsky knew something, it was pain. Nevertheless, he didn’t really reject it. Actually, he reflected on it in an almost educational way. He pointed out: “Pain and suffering are always inevitable for a large intelligence and a deep heart. The really great men must, I think, have great sadness on earth.“

One way or another, he showed that pain makes us more sensitive. It also deepens our thoughts. It’s not a praise to suffering, but an analysis of one of its sides.

Reading Fyodor Dostoyevsky is a true delight. His work remains entirely valid, given that his purpose wasn’t to portray a time or specific circumstances but to scrutinize human nature. His work is also the testimony of a man who knew how to overcome adversity and turn it into art.

She was born yesterday, and in a few hours, she will be starting college. Yesterday they told me I was…

How many times do we distinguish between "natural" and "unnatural sex?" We base these definitions on prejudices that have been following…