Many parents psychologically abuse their adult children with emotional manipulation, criticism, and comparisons. These invisible dynamics can eat away at the well-being of the men and women who continue to depend on their parents. 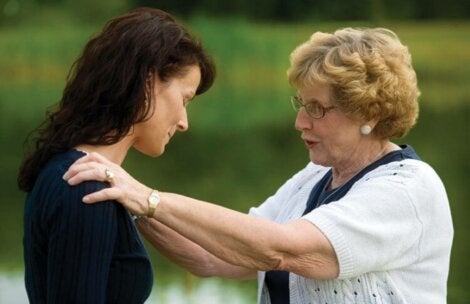 Many parents psychologically abuse their adult children with manipulation, blackmail, hurtful words, and comments that feed childhood insecurities. The passage of time doesn’t guarantee that harmful childhood attachments will be broken or repaired. Sometimes, they continue well into adulthood, negatively affecting self-esteem and well-being.

Psychological abuse comes in many forms and can affect anyone. Some children abuse their elderly parents, some parents abuse their young children, and even some independent men and women continue to be abused by their father, mother, or both parents.

What can be done in these cases? Reaching out to social services or other organizations that deal with these kinds of issues often seems pointless to the adults dealing with abuse. What’s the point of trying to fix something that you’ve been dealing with since you were a child? Many victims of psychological abuse don’t believe it’s possible to change their circumstances. They’ve resigned themselves to their situation and are still in contact with the abusive parent.

One thing is clear: an abusive parent and their child always have a bond, a connection that feeds dependence, fear, and even love. It’s a harmful kind of love, obviously poisoned by the abuse. Unfortunately, these situations are common and can easily become chronic.

Psychological abuse is any behavior that seeks to control or subjugate another person with fear, manipulation, humiliation, intimidation, projection of guilt, coercion, and constant disapproval.

Although these types of aggressions might not leave physical marks, they affect psychological integrity. For example, their impact on a child’s mind can be devastating. When this kind of abuse continues for decades, you can imagine the consequences. It has an enormous impact on basic aspects such as self-esteem, identity, and personal safety, among others.

This kind of abuse doesn’t begin when the victim is an adult. It’s always rooted in behaviors that started during their childhood. That explains why a lot of people reach adulthood with heavy emotional baggage. In fact, a lifetime of psychological abuse can lead to post-traumatic stress disorder.

One noticeable aspect of this kind of abuse is the extraordinary efforts people make to pretend everything is normal. Very rarely do relatives and friends, even close ones, know anything about the abuse. The circumstances stay hidden and fiercely guarded.

When the monsters are your parents: normalizing psychological abuse

As we mentioned above, many parents psychologically abuse their children. The first question that might come to your mind is why this happens. How can people put up with these awful circumstances? Wouldn’t it be better for these people to break ties with these abusive parents?

But it’s never that simple. The connection between a victim and an abuser is incredibly complex. Sometimes, in spite of awful circumstances marked by anxiety, fear, humiliation, and contempt, you can still love a person who hurts you. At the end of the day, it’s your parent. If you’ve never known any other kind of parent-child relationship, then this behavior can seem “normal”.

Consequently, adult children continue to put up with the abuse and waver between love, fear, affection, and hate. Their abusive parents don’t change their behavior just because their child is an adult. Contempt, criticism, humiliation, and emotional manipulation continues to be useful to control and exercise power.

The passage of time doesn’t turn monsters into angels. They continue to feed off power and control because it’s part of their personality.

What’s the effect of this psychological abuse?

One of the consequences of emotional and psychological abuse that starts during childhood is post-traumatic stress disorder. Community studies from Utrecht University and the University of Coimbra in Portugal have shown the significance of this relationship.

Thus, psychological abuse that continues into adulthood tends to have the following consequences:

Is there a way out?

Although these kinds of situations often seem hopeless, there are ways to get out of an abusive relationship. For starters, the adult needs to be fully aware of the abuse and be committed to addressing it. This is easier said than done because dependency is common in abusive relationships. Not only emotional but financial dependence as well. Many adults in this situation can’t leave their parents’ home because they aren’t financially independent.

However, being financially stable doesn’t mean that it’s easy to cut these abusive ties. They’re very difficult to break due to the abuser’s constant manipulation and criticism. The victim has to firmly believe that their situation is untenable and needs to change.

Consequently, there are only two options. Call out the abusive parents and completely cut ties with them or significantly reduce communication.

Likewise, adult children of abusive parents need psychological help. Decades of humiliation and suffering leave a very deep wound that needs to heal. The goal is for them to recover their self-esteem, personal safety, and build their lives up again so they can be independent and happy.

Link copied!
Interesting Articles
Family
When You're Embarrassed by Your Family

There's no doubt that having a child is a blessing. But the price of parental stress that raising a child entails is a completely different matter. In fact, you may…