Choosing a Type in Emotional Dependence

The choice of an object in emotionally dependent partners doesn't happen by chance. It's the result of an unconscious search in many cases. 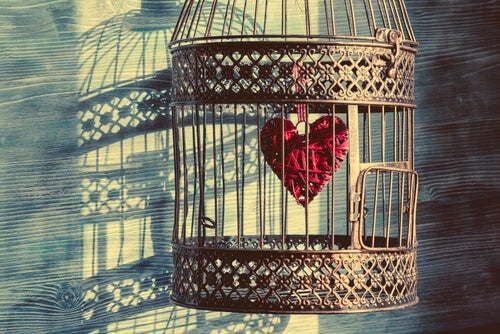 Often, those who’ve been in a harmful and destructive relationship repeat the pattern with their new partners. It can be frustrating and painful to think you’re unlucky in love. However, choosing a type doesn’t happen by chance.

Luck doesn’t lead you to establish links with the same type of person over and over. Instead, your unconscious is guiding you in the dark. Thus, you must analyze your decisions and discover what motivates them.

“Until you make the unconscious conscious, it’ll direct your life and you’ll call it fate.”

Choosing a type in emotional dependence

Emotional dependence is a pathological style of bonding based on an emotional deficiency. The need for approval and the fear of abandonment are so intense that people often endure transgression after transgression. Their main goal is to make sure the relationship doesn’t end.

When a couple breaks up, which is usually the decision of one of the partners, the emotionally dependent partner loses the pillar they sustained themselves with. Then, they experience a sort of withdrawal that leads them to bond with someone else as soon as possible. However, the pattern tends to repeat itself and the person is once again in a conflictive, unstable, and painful relationship.

It’s common for a person to wonder why they always end up romantically involved with cold and abusive people after several similar experiences. Why do you gravitate towards individuals that hurt your self-esteem even more? You must understand that precisely this absence of self-love is what leads you to unconsciously choose a specific type of mate.

What are the characteristics of a “type”?

Those with an adequate emotional balance seek to connect with similar people to establish a reciprocal and symmetrical exchange. On the contrary, emotionally dependent people are attracted to people they perceive as superior and tend to idealize them.

This supposed superiority doesn’t generally imply that an individual is truly special. Their high self-esteem and overflowing self-confidence arouse the fascination of an emotionally dependent person.

Dependent types believe that they find what they lack in self-aggrandizing people: self-love. Thus, it’s common for the dependent person to be much more capable than their partners and, yet, neither of them perceives it that way.

This form of “high” self-esteem often translates into narcissism and egomania. Indeed, the chosen objects are usually self-centered, manipulative, and lack empathy. They’re cold and inaccessible individuals who are content with themselves and think they deserve all sorts of privileges.

Their overvaluation complements the undervaluation of an emotionally dependent person perfectly. This is because the latter praise them and surrender what the narcissist believes to deserve.

Another relevant characteristic when it comes to choosing a type is the dominant tendency of the new partner. This is because their narcissism leads them to seek and attain a superior position in the relationship and they turn those who let them into their subordinates.

One more time, there’s a perfect binomial. This is because the emotionally dependent person won’t overshadow the narcissist due to their low self-esteem. On the contrary, they admire and praise them constantly.

In addition, they ignore the person’s flaws and take all sorts of humiliations and contempt.

Choosing a type – a perfect fit

After analyzing these characteristics, it’s clear that the union between emotionally dependent people and narcissists isn’t random. Their qualities and deficiencies complement each other perfectly, meaning each one gets what they unconsciously seek from the other.

This isn’t a conscious or deliberate decision. No one would ever choose an exploitative and abusive person to share their life with of their own accord. However, the cycle will go on until they have the courage to look straight ahead at the gaps.

Thus, be careful if you identify with the above and often find yourself in asymmetric and harmful relationships. Analyze what’s leading you to choose a recurrent type in your relationships and try to determine its origin. Only by working on your self-esteem will you be able to eliminate your fears and deficiencies. As you can see, only then will you be in a position that allows you to relate as an equal, with love and respect.

The Excuses that Prolong Emotional Dependence
There are many excuses that can prolong emotional dependence and make us stay in relationships that are hurting us. Read on! Read more »
Link copied!
Interesting Articles
Romantic Relationships
How to Understand and Overcome Jealous Feelings