Otherkin are people who don't identify as human, either entirely or partially. These people are convinced their identity is more directly related to an animal, a mythological creature, or a fantastic character. 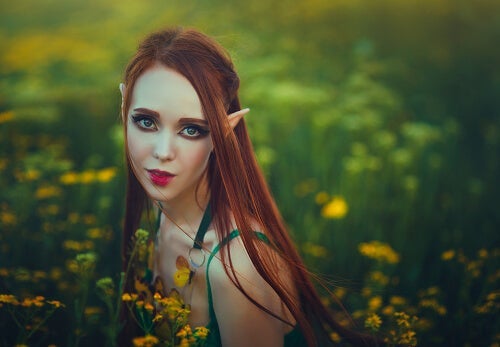 The otherkin is a community of individuals who don’t consider themselves human. They truly believe that their identity is either partially or entirely non-human. In other words, they feel that they’re mythological beings, incorporeal entities, or a different animal. For example, they may think they’re angels, vampires, dragons, lions, foxes, elves, or aliens, among others.

Members of this community relate differently to each other and to the rest of the world according to their perceived identity. They even have specific initiation rites. Due to their identities, they’re often the object of abuse and discrimination that can lead to psychological disorders. Continue reading to find out more!

What does it mean to be an otherkin?

The term comes from English and is formed by the words “other” and “kind” (type, species). Also, the Middle English Dictionary (1981) defines otherkin “A different or an additional kind of, other kinds of“. Thus, anyone who identifies as otherkin is convinced they’re not human or that there’s something different about them.

The attitude of these people depends largely on the identity they adopt. Those who think they’re elves are allergic to iron, while those who believe to be vampires can’t stand the sunlight. Some otherkin who think they’re animals claim to be more empathetic and connected with nature due to their animal instincts. Others claim to have the ability to separate from their body and make astral and extracorporeal trips.

Some otherkin are so extreme that they follow up on their desire to resemble the being they identify with. Thus, some of them undergo plastic surgery to modify their bodies. All with the aim of approaching the ideal appearance of the identity they adopted. Thus, some of them file their teeth so these look like fangs, while others get surgery on the tips of their ears to resemble elves.

How do otherkin relate?

Otherkin meet on the internet. There are many communities and forums on Reddit, Tumblr, and Facebook, among others. The community is quite large, a lot more than you’d think, and they have a huge online presence.

In these virtual communities, they gladly give information about their condition and advise new pretenders. There are many isolated groups formed by otherkin with specific identities. Like, for example, a group of dark beings, such as vampires, demons, and dragons.

Also, there are pages and blogs dedicated to telling the everyday life of an otherkin. In addition, there are many web pages with informative articles that intend to raise awareness about the otherkin community. There are even stores that sell merchandise about them and for them.

The otherkin online community doesn’t have a hierarchical organization. Rather, it’s an interaction between individuals and closed communities, expressing how, why, and what they’re otherkin. Similarly, these communities occasionally organize meetings outside the Internet, although their interactions occur mostly online.

The beginning of an otherkin

Otherkin aren’t always aware of the existence of their alter ego. They usually find out when they initiate as otherkin, also known as the “awakening” process. This is because, potentially, anyone can be an otherkin and wake up at some point.

Many otherkin are in difficult situations or have existential issues before waking up. They don’t really know the cause of their afflictions. Thus, they feel liberated when they recognize their identity as otherkin. This is precisely why they feel so comfortable when they adopt the appearance and attitudes of the creature they identify with.

There are no two equal awakenings, as each person experiences it differently. It usually occurs during adolescence, although it can occur at any point throughout their lives. Dreams or traumatic events usually trigger it and it may either become a long and difficult fight or an easy and straightforward transition.

It’s for this reason that there are many forums and websites on the Internet that seek to advise and guide the process of awakening the new otherkin. Many of the attendees are teenagers who want to know what’s happening to them. They find support with other people who can understand them.

Are these people delusional?

Many psychologists and psychiatrists believe that many members of the otherkin community may have a mental disorder. There’s such a thing as clinical lycanthropy, and also bipolarity, schizophrenia, and species dysphoria. However, most of them deny they might have a disorder. They argue that identifying with other beings is a way of learning and accepting and not fleeing from reality.

Another mental disorder usually associated with this community is phantom limb syndrome. People with it feel the existence of a part in their body that isn’t there. For example, some otherkin feel they have a tail, tentacles, or even a pair of wings, even when these don’t physically exist.

Some otherkin may have multiple disorders that have nothing to do with their identification with other creatures, such as anxiety, social phobias, and obsessive-compulsive disorder, among others.

Finally, note that adopting an identity outside their own could be a way to defend themselves against social pressures. Therefore, being otherkin might be a way in which these people manage their anxiety.

Working through Delusions in Therapy
In this article, we're going to talk about working through delusions in therapy, and some of the difficulties involved with delusional patients. Read on! Read more »
Link copied!
Interesting Articles
Curiosities
Why Do We Resist Living In The Moment?

Curiosities
Aporia: The Wisdom of Contradiction

The term aporia comes from Greek. We can define it as a state of uncertainty or perplexity when exposing ourselves…