Olfactory Reference Syndrome: When You Believe You Smell Bad 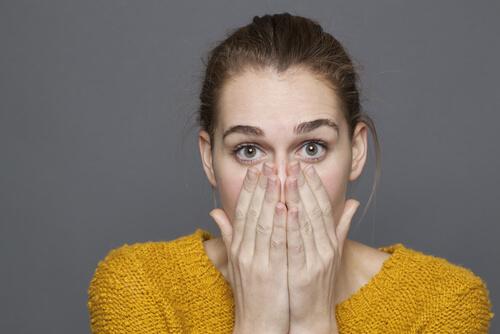 Some mental disorders are very well-known. As such, they aren’t as difficult to detect. However, others are less visible in society. Hence, you may be suffering from a syndrome without even knowing it. In the case of olfactory reference syndrome, it’s a rare psychological problem that not many people may have heard about.

Olfactory reference syndrome is a mental disorder characterized by the irrational belief that you smell bad and that your smell is bothering the people around you. Due to this worry, you interpret other people’s actions in an incorrect way. You look for signs that indicate that others are effectively bothered by your smell.

In extreme cases, this syndrome can come to cause problems such as extreme embarrassment, anxiety, and avoidance of social situations. In this regard, this last symptom can contribute to the development of social phobia and isolation behaviors. This is especially true when we don’t detect the symptom in time. This is why it’s important to recognize it so that we can treat it appropriately.

Neurologist Pruse-Phillips identified this syndrome in 1971. He used it to describe a group of patients convinced that their bodies emitted bad smells and that people around them perceived this. On the other hand, authors such as Bishop and Davidson consider it a hallucinatory idea. Some others classify it as a specific type of obsessive-compulsive disorder.

There is still no official classification for this disorder. Despite this, in the last edition of the DSM (Diagnostic and Statistical Manual of Mental Disorders), some psychological associations have described many of the most common symptoms of this disorder. Thanks to these efforts, it’s easier to diagnose olfactory reference syndrome and treat it appropriately.

Some of the most common symptoms of this syndrome are:

1- Complaints about your own smell

The principal component of olfactory reference syndrome is the irrational belief that you smell really bad. Different people become obsessed with the different origins of this bad smell. Some of the most common ones are bad breath, their armpits, or their feet.

On the other hand, some people aren’t sure where the foul odor they believe they perceive comes from. Even so, they’re sure that it does exist. Sometimes, the worry comes from the belief that some type of bodily secretion smells bad. It can be sweat, urine, or stool.

In the most extreme cases, the person may believe that they have an unnatural smell. For example, they might believe they smell like rotten onions, bad fish, or a strong-smelling cheese. Generally, these types of patients have the highest probability of presenting comorbidity with other disorders.

2- Incorrect interpretation of other people’s behavior

Those who suffer from olfactory reference syndrome misinterpret other people’s innocent behaviors and link them to their supposed bad smell. For example, they believe that the distance between a person in relation to them is linked to their smell. This may also extend to gestures, sneezes, or actions such as opening a door or window.

Depending on the severity of the disorder, the people affected by olfactory reference syndrome might experience these strong intrusive beliefs in their daily lives. Because of that, the symptoms are sometimes incorrectly diagnosed.

Most people with olfactory reference syndrome have obsessive behaviors. These behaviors are related to personal hygiene. With these behaviors, they try to mask the smell that worries them. These repetitive behaviors tend to cause the development of extreme anxiety and cause problems in their daily lives.

Some of the common behaviors of people with this syndrome are showering several times a day and constantly smelling their body parts. They might brush their teeth throughout the day or use too much perfume or deodorant to avoid smelling bad. In principle, these don’t seem like very harmful behaviors, but repeating them a lot can affect your daily life.

4- Problems in their day-to-day lives

In the most advanced stages of the disorder, people who suffer from olfactory reference syndrome may come to avoid social situations. They do this to avoid inconveniencing people around them and feeling embarrassed. In general, the consequences may include loss of employment, divorce, or even having to stay in the house all day.

5- Comorbidity with other disorders

Olfactory reference syndrome can end up causing all sorts of disorders that can range from personality disorders to drug abuse. Detecting the syndrome in a timely manner is essential in order to ensure it doesn’t turn into a more serious mental illness.

3 Strange Delusional Misidentification Syndromes
Delusional misidentification syndromes are distortions of the thought process that lead the person affected to have a distorted vision of reality. Read more »
Link copied!
Interesting Articles
Culture
Self-Regulated Learning: What Is it and Why Is it Important?

Culture
How Does a Time Change Affect You?

Two weekends per year, a good part of the northern hemisphere undergoes a time change in order to take better…

This last interview with Carl Jung helps us understand the depths of his thinking, the foundation of his beliefs, and the ins and outs of his theories. Jung was a…