We live in a society with a continual obsession for success. But to what extent is this conception of success natural, or cultural? 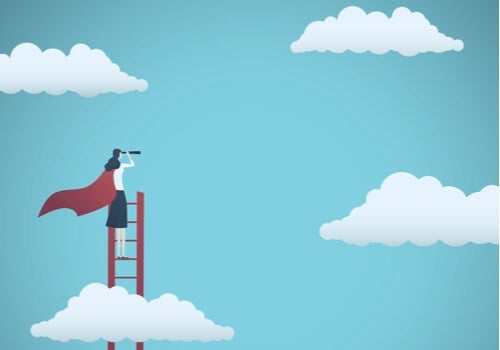 The obsession with success has become almost synonymous with our personal wealth. Not just success itself, but our obsession with it. When someone doesn’t aspire to make a lot of money or have an “enviable” job, they often hear questions like, “So what do you aspire to?” It’s as if success (which translates into money) has to be the backbone of our life at all times.

Why do you always aspire to want more, and why do you sometimes maintain that aspiration despite seeing the bitterness you receive in return? So, today we’ll ask the question: Is it inherent in human beings to want to achieve maximum success or is it a condition imposed by society?

The obsession with success: natural or cultural?

When we’re very young, we’re bombarded with messages that tell us what our ideal life plan should be. The imposition of this specific ideology often limits our vision and obscures the other points of view.

As humans, if we’re taught to think that success equates to having lots of money, then we’ll believe that, ultimately, the objective for all human beings is, indeed, to accumulate money. If we were all taught that success equates to treating others well, then our goal would be to try to be good people. So, as you can see, social influence plays a large role in people’s social and personal aspirations.

No natural law says that humans have to accumulate a lot of money or have an innumerable list of possessions. The obsession with success is clearly a social and cultural imposition.

However, many people don’t realize this, because these surrealistic and unreasonable demands have generally prevailed in society. Consequently, people who associate success with having the best job from a very young age are likely to believe that this is, indeed, real success.

The obsession with success and frustration

Two of the most widespread epidemics of the 21st century are depression and anxiety. The World Health Organization (WHO) stated in 2016 that more than 350 million people currently suffer from depression. Four years previous to that, it said that “In 20 years’ time, depression will be the disease that humans suffer from most, surpassing cancer and cardiovascular disorders”.

Does this obsession with success have anything to do with it? Absolutely. The imposition of unrealistic goals frustrates us because we see that we’re far from achieving them. Many people claim that their life is a failure because they don’t have a good job, their car is just “normal”, and their house “isn’t very big”.

They haven’t learned to appreciate what they do have. It’s as if the natural thing is to look at the sky, instead of the horizon or the earth beneath our feet. They don’t realize that, just by having the three things we’ve mentioned, they’re already richer than the vast majority of the world’s population.

A healthier concept of success

However, there are signs that, little by little, we’re approaching a healthier concept of success: being happy in the here and now.

Appreciating what you have and moving in a morally correct direction is much more admirable than the incessant desire to accumulate material goods and prestige. Moreover, if you look closely at those who really are obsessed with success, you’ll see that they’re the ones who suffer the most.

Those who care about others, and are happy with what they have, enjoy greater happiness. Nevertheless, we should point out here that being happy with what we have isn’t synonymous with conformity, but rather, with knowing how to enjoy what you have in any given moment.

Diogenes and Alexander the Great

The story goes that Alexander the Great wanted to have a meeting with Diogenes, who lived in a barrel. In fact, this was one of his few possessions. Some considered him a dog, and others a sage.

When Alexander the Great appeared before him, he told him of his admiration for him, and they started to converse. Alexander turned to Diogenes and said, “Is there anything I can do for you?” With these words, we can see the Alexander could have given him riches that men couldn’t have dreamed of.

Diogenes had a chance to radically change his life. He could now live in a palace and enjoy unlimited money.

However, his answer wasn’t what we would have expected. Diogenes replied: “Yes, you can step aside a little so as to not keep the sunshine from me”.

It’s also said that Alexander affirmed that “Say what you like, but if I weren’t Alexander, I should like to be Diogenes“.

This anecdote reflects how some of our needs are related to our culture and society. For Diogenes, success and happiness equated to being calm and enjoying the sun. For Alexander, it was the excessive ambition to conquer more and more lands.

From obsession with success to compassion

Matthieu Ricard, doctor in molecular biology and Buddhist monk, has been described as “the happiest man on the planet”. Ricard asserts that “Compassion, the intention to remove the sufferings of others and the causes of their suffering, linked with altruism, the wish to bring well-being to others, is the only unifying concept that allows us to find our way in this maze of complex concerns“.

Ricard uses “labyrinth of worries” as a synonym for the world we live in, and which, somehow, we have shaped. He claims that compassion gives meaning to our existence. Thus, if we take these words on board, then success, happiness, and much of the meaning of life is about looking out for other people’s interests.

He adds that happiness “Isn’t just a succession of pleasant experiences. It’s a way of living that comes from cultivating a set of basic human qualities, such as compassion, inner freedom, inner peace, resilience, etc.” He also gives us the key to developing these qualities, saying that each of these qualities is an ability that can be cultivated through mental training and altruism.

“All the happiness there is in this world arises from wishing others to be happy.“

The 7 Spiritual Laws of Success According to Deepak Chopra
What is true success? We'll be looking at the views of Deepak Chopra in this article. Read on to find out about the 7 spiritual laws. Read more »
Link copied!
Interesting Articles
Personal Development
Should I Forgive in Order to Heal?

Forgiveness is no easy challenge. It's even harder when a person close to you harmed you. The depth of the…