Noah Wall, the Story of the Child with Brain Growth

Noah Wall is living proof that brain growth isn't a myth. It isn't clear to science how a child who was born with a minimal portion of the brain was able to evolve into almost a normal boy. 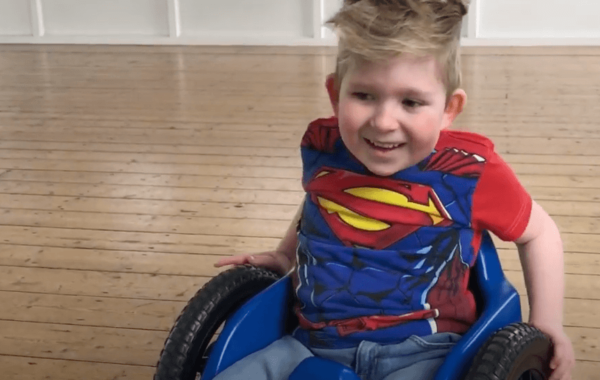 The story of Noah Wall is truly amazing, as it’s a case of brain growth from an anatomical point of view. Without a doubt, this story represents scientific curiosity, but it goes beyond that. It also broadens the knowledge regarding the human brain.

In short, this amazing case of brain growth is related to an English boy named Noah Wall. He was born with only 2% of his brain. The fact that he was able to live is an unusual fact in itself. However, the most incredible thing of all is that, over the years, and thanks to care and treatments, he managed to develop up to 80% of normal brain volume.

“Life has no limitations, except the ones you make.”

Now, it’s impossible to overlook something regarding this already fantastic case of brain growth. We’re referring to the fight that Noah’s parents had to carry out. His mother and father are the reason that this British boy is alive. Undoubtedly, this story is an example that some limits only exist in the mind. This is a case of foolproof faith, effort, and perseverance.

The case of Noah Wall

Shelly Wall wanted a child more than anything else in the world. Thus, she was happy when she got the news that she was going to be a mother. However, the happiness didn’t last long. After a careful examination, she received terrifying news, ones that would change everything. Basically, the doctors told her that her son had a severe case of spina bifida. This meant that the two lines in the fetus’ spine were still open.

Nonetheless, this wasn’t the only bad news. Doctors found that the boy had a brain tumor that had prevented the grey matter from developing. In other words, there was fluid in the brain. The doctors’ advice was to cause an abortion, as there was no way to correct those serious abnormalities. She was hopeless – her son awaited a life full of limitations.

In fact, the child wasn’t supposed to survive birth. And if he did, he would have to bear severe physical and mental disabilities for life. Shelly and her husband Rob discussed and decided to continue the pregnancy. At the same time, they began to prepare their son’s funeral.

A case of brain growth

The doctors respected the couple’s decision, but also issued a do-not-resuscitate order. What this means is that they banned applying emergency measures in case Noah stopped breathing at birth. On March 6th, 2012, Shelly underwent a cesarean section assisted by 12 doctors.

They immediately took the baby to the operating room to repair the spina bifida and drain the cerebrospinal fluid that filled most of his head. To everyone’s surprise, the boy not only survived, but the operation was a complete success.

Noah’s childhood has been marked by doctors, surgeries, hospital visits, and his parents’ ongoing struggle to care for him and help him grow. The little boy has undergone neurophysical therapy, which combines physical therapy, cognitive exercises, and physical activity. In the end, they accomplished exactly what they wanted: Noah’s brain had grown.

A world full of hope

Noah’s breakthrough came during his first three years of life. It isn’t clear to neurologists how a small portion of the brain manages to learn the functions of other parts and result in brain growth. To everyone’s surprise, Noah’s case hasn’t been studied by science in much detail.

The truth is that the little one managed to complete 80% of the brain volume and became a child almost equal to the others. The reason why we say “almost” is that he hasn’t yet recovered the movement of his limbs, although he publicly celebrated the moment when he was able to move one leg.

For Noah’s parents, this experience has been taxing but also exciting. They decided to share their story so they created a blog called “Hugs for Noah“. Claire Nicholson, the neurologist who handled the case, is especially thrilled about the boy’s desire to live. In her own words, Noah is “an extraordinary boy with two extraordinary parents“.

Your Limits Are Only In Your Mind
The limits that we impose upon ourselves don't actually exist. They are beliefs that we have adopted throughout our lives since childhood. Read more »

Link copied!
Interesting Articles
Culture
Graphology: What Your Handwriting Says About You

According to the tradition of the Mayans from the Guatemalan highlands, when children are scared or have nightmares, they give them…

Culture
3 Patriarchal Beliefs That Prevent Women From Being Healed