We think of negative emotions as things to be avoided. In fact, we even tend to believe if we ignore them, they'll go away. However, this isn't the case. The answer lies in learning how to manage them. 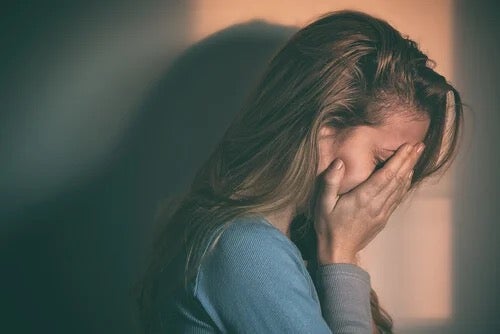 It’s generally accepted that negative emotions should be avoided and even suppressed. We think the less we exhibit and experience them, the better, as we believe they don’t do us any good.

Fear, anger, resentment, shame, and guilt aren’t welcome. They’re frowned upon. However, although in principle, getting rid of what you don’t agree with is usually advisable, you should never ignore or repress these kinds of emotions. In fact, they need to be expressed. This doesn’t mean you should let them take over, but you should be able to release them. Because, if you don’t, they might end up dominating your behavior.

If you knew that having a certain drink would harm you, you wouldn’t drink it. However, emotions don’t work that way. Because it’s not that easy to avoid them without suffering negative consequences. Indeed, suppressing negative emotions can cost you dearly.

What happens to the dust you sweep under the rug?

Imagine that your negative emotions are a layer of dust on the floor. If you sweep it under the rug, at first you won’t be able to see it and you can carry on your life without anyone else knowing about it. You know it’s there but, as you can’t see it, you probably won’t worry about it.

Several days go by and as more dust appears, you sweep that under the rug too. Every day there’s more and more. You know it’s there but, again, as you can’t see it, it doesn’t bother you.

How long do you think you’d be able to keep hiding the fact that there’s an increasing pile of dust under the rug? How long before you realize that you just can’t ignore it any longer and you trip over the hidden mountain of dust?

Like the dust, building up your negative emotions only delays the inevitable. Eventually, those emotions will manifest themselves. In fact, they may do so all at once, in a rather explosive way.

In any case, you’ll ultimately find yourself in the position of having to deal with these emotions in one way or another.

Don’t hide your negative emotions, manage them instead

Emotions form an important part of your daily life. For instance, you might be feeling happy because you’re having fun with friends or feeling frustrated because you’re stuck in traffic. Whatever they might be, your emotions significantly affect your general well-being.

Furthermore, your ability to regulate your emotions can affect how the people around you perceive you. Because the way you evaluate your experiences affects your emotional responses. Some of these feelings might be appropriate to the situation and won’t need regulation.

However, some feelings do require regulation. Take anger, for example. While expressing it might make you feel better, in many cases, it isn’t particularly appropriate or adaptive. It’s better to find a way to accept your emotions and release them in a calmer way.

Suppressing negative emotions isn’t a good idea. The best thing to do is learn to manage them. In other words, regulate them and give them a voice.

How to control negative emotions

Being able to control your thoughts and emotions increases your confidence in your ability to cope with them. In order to manage a negative emotion, you need to start by choosing a situation in which you feel this emotion. Then, try to avoid the circumstances that trigger it.

At other times, the solution might lie in avoiding certain people in certain circumstances or calming yourself down and approaching the threatening situation in a more controlled and peaceful manner.

In fact, the secret lies in identifying the situation or circumstance as well as the negative emotion it would unleash.

Change the situation and your approach to it

The next step is to change the situation. In fact, once you’ve identified it, try and modify it in such a way that it doesn’t trigger those negative emotions in you. This change has to come from you. For example, you might need to change your expectations surrounding the situation, reduce some of your demands, or take a more understanding and empathetic standpoint.

It’ll also be helpful to change your attentional approach. In other words, instead of focusing on the aspects that trigger your negative emotions, take a look at other more positive aspects. In fact, take your attention away from what you dislike and look for something that makes you feel good, something you can appreciate.

Finally, you can try and change your responses to negative emotions. In fact, if your emotional management mechanisms aren’t working, and you find your emotions getting out of control, this is the final step in emotional regulation to try. Changing your responses will help you avoid suppressing those negative emotions. As a matter of fact, this course of action will actually push you to regulate them.

To do this, you need to identify your body’s physical signs that lead to the negative emotion being triggered. Then, acting on these signs will help you control your response. You might achieve this by simple actions such as taking a deep breath or closing your eyes. These actions are often helpful in controlling anger.

“Powerful negative emotions twist attention toward their own preoccupations, interfering with the attempt to focus elsewhere.”

Finally, remember that these emotions belong to you, so you’re responsible for managing them. Indeed, how you behave is always ultimately down to you and nobody else can be held accountable. The responsibility is yours alone.

Does Accepting Negative Emotions Make You Happier?
Accepting negative emotions can be complicated. As difficult as it may be, however, doing so can positively impact your well-being. Read more »
Link copied!
Interesting Articles
Emotions
The Keys to Overcoming Stress and Anxiety

You need to understand two things to overcome your stress and anxiety. The first one is that you can't escape…

If there's one thing the world needs right now, it's compassionate empathy. What this means is not settling with understanding, connection,…