Narcissistic jealousy is very intense and destructive and causes a lot of suffering. Read on to learn more! 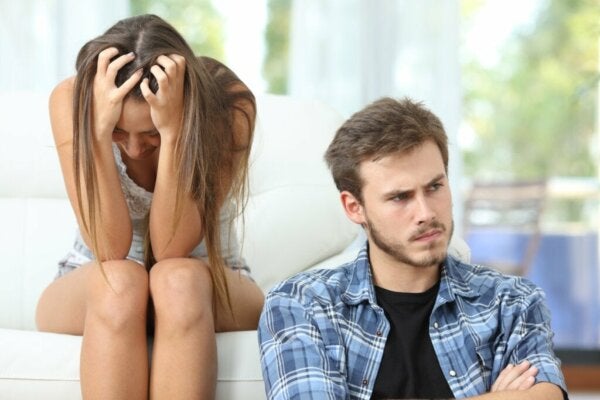 Jealousy in relationships is a complex feeling associated with passion and affection. However, it can also involve ego and power. Narcissistic jealousy is one of its many varieties. In particular, it’s characterized by its emphasis on the person’s ego.

Usually, there aren’t any long-lasting guarantees in relationships. In most cases, this isn’t the case and that’s why it depends on many different factors. There’s always the possibility that a relationship will end.

It’s obvious that someone who’s in love doesn’t want to lose their partner and, eventually, they may fear that a third party is threatening their relationship. Under normal conditions, this is when jealousy appears. It’s a manifestation of resistance and insecurity. However, this isn’t always the case, as some other aspect can be behind this feeling.

So far, we described a situation of “normal” and motivated jealousy. Narcissistic jealousy is something else, however.

In these cases, the fear of losing someone you love isn’t the overriding concern, but, rather, the frustration of being displaced by a third party. The person will also experience anger over the happiness that their partner may feel with another person.

Whoever experiences narcissistic jealousy suffers greatly, but not because of the loss of the loved one. They suffer because their ego is wounded and they often find it difficult to distinguish one from the other.

Rather than being hurt because the other person has taken away their affections, they’re tormented by the feeling of losing. This can suggest that, to a great extent, they’ve approached the relationship from a power position.

It’s clear that infidelity inflicts a narcissistic wound, especially due to the deception it usually involves. However, under normal conditions, it causes suffering, anger, and resentment, but which can, in the end, be dealt with. Either the relationship ends or the couple seeks dialogue and resolution.

In narcissistic jealousy, this doesn’t happen. The one who experiences it won’t rest until they “make the other one pay” for their offense. They’ll feel entitled to scourge the other person emotionally, and sometimes even physically. They won’t allow them to “get away with it” without them first paying a high price.

Loving, or being loved by, a narcissist

A narcissist isn’t a bad person per se, but they do need help. The sad thing is that they rarely admit it and that’s why conflict resolution is difficult. On top of this, they’re confused, and, at the same time, they confuse their partner.

Yes, they can show solidarity and protection, as well as charm and vitality. However, in exchange, they ask for total adoration.

Narcissistic jealousy is typical in people with a fundamental fracture in their ego. They consider themselves to be lacking in some way and compensate for this by placing a high value on themselves. They don’t usually realize this and it all goes on subconsciously.

That broken ego makes jealousy a hallmark of who they are. They don’t need a third party lurking around in order to display their suspicions and mistrust. Besides, they’re also jealous of their partner’s achievements and successes. They want their partner to be a good step below them, or at least for their partner to consider them the most important thing in their life.

Narcissistic jealousy has another side to it as well. Quite often, people of this nature actually try to make their partner jealous. As a result, it isn’t uncommon for them to flirt right under their partner’s nose. Or, in extreme cases, they may even be unfaithful and leave obvious clues in order to be “caught”.

By creating jealousy in their partner, they achieve something they need: to make them insecure. The hope is that this distrust will make their partner focus more on them, and that’s what they love.

Those who feel narcissistic jealousy frequently try to create jealousy in their partner. It’s a typical case of doing something to them that you don’t want them to do to you.

They often do this in anticipation of what their partner may do to them, thus avoiding potential harm to their own ego. On top of that, it’s just one more way of showing that they’re in control of the relationship.

Jealousy and Passive-Aggressiveness
Jealousy and passive-aggressiveness go hand in hand. From a psychological perspective, these emotions are complex and potentially lethal for a relationship. Read more »

Immature love and mature love. We've all taken (or should take) that emotional journey from one dimension to another. It's…