Jealousy is Useless and a Waste of Time

People mistakenly believe that jealousy is part of love, but it has nothing to do with it. In fact, insecurity and low self-esteem are closely related to it. As you can see, it's completely useless. 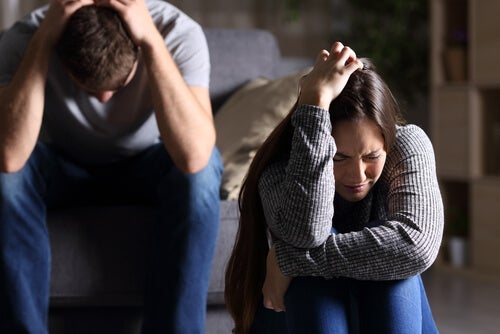 Is jealousy about love? This is a common question in romantic relationships. However, jealousy is useless and not at all about true love; it doesn’t mean a person loves you or matters to you.

Experiencing this unpleasant, complex emotion indicates the presence of certain emotional deficiencies that lead to fear and insecurity. Jealousy is useless and seldom leads to a happy outcome for anyone involved.

What exactly is jealousy?

People are jealous when they think the object of their affection will be taken from them (or already has been). In other words, they’re afraid of losing the person they love. Thus, an interpersonal triangle ensues. Its main protagonists are the loved person, a rival, and the jealous person. Furthermore, this situation, be it real or imagined, means a person’s ego is hurt.

Canto, García, and Gómez (2009) wrote in a review that: “Jealousy is likely to occur in response to the threat of a rival that’s superior to the jealous person in ways that are important for their self-esteem”. What does this mean? Well, that people are usually jealous of those they perceive as superior.

One day, your perspective of reality begins to blur as your levels of suspicion and anger increase. You perceive that your beloved pays more attention to another and even that they’re more affectionate to them. At least, that’s what you believe. For example, you’ve observed they show a side of them that you believed was exclusively yours. So, what’s going on here?

Jealousy can be imagined. In other words, created from small details that are taking shape in your mind. There are times when you don’t even have evidence and indicators. If this is the case with you, then you have a problem to solve on your own. However, they can also be due to objective reality. Your partner has fallen in love with another person. But you must keep in mind that not all relationships last forever.

Likewise, these situations not only manifest in the sphere of a couple. In fact, jealousy can also manifest in families. When a couple decides to have a second child, the firstborn may become jealous if they believe that they’ll receive less attention and love from their parents after the arrival of a new sibling. For this reason, the eldest child can make life hell for the younger child and be conflictive around their parents and everyone around them.

How do people react to feeling jealous?

“Why me?”, “Why with that person?”, or “Why is this happening to me?” These and other similar questions automatically pop-up in your mind in jealousy driven situations. However, the first emotional reaction is usually anger towards the person you may consider a rival. The goal of this reaction is to avoid losing your loved one or taking revenge on anyone you consider responsible for your loss.

Likewise, you may also experience anger towards your loved one since you blame them for what happened. There are even instances in which a person might think someone’s only doing it to annoy them.

Jealousy is useless, even though you might have a tendency to mistake your attachment for love. Love is freedom and attachment only makes you dependent, therefore vulnerable. So, in response, you might feel that the object of your affection belongs to you.

What many people don’t realize is that jealousy is synonymous with low self-esteem and a strong sense of insecurity, at least in most cases. In the end, it’s as if you don’t think you’re good enough for someone.

However, there may also be a possessive relationship in which the motto is “You’re mine, so pay attention to me”. From this perspective, anxiety also manifests from anger. Thus, it’s not surprising that a jealous person will try to control the situation in an attempt not to lose their loved one.

Jealousy is useless and mainly rooted in insecurity

Your insecurities may lead you to mistrust your surroundings, people in particular. Adorno (1950) postulated that a mind with a poorly elaborated cognitive structure resulted in insecurity in addition to low self-esteem.

According to the author, social changes happen so fast that it’s very costly to build a healthy cognitive structure. And one of the ways to try to relieve your insecurity and low self-esteem is through an authoritarian personality. Thus, you need to control others in order to feel better about yourself.

In his work Escape from Freedom (1941), Erich Fromm assures us that humans seek freedom but when they find it they feel insecure and shun it. Fromm says that one way to avoid such feelings of insecurity is to subdue others. Thus, you can see how both authors make the connection between an insecure personality and low self-esteem as the foundation for control.

Thus, jealousy is often the result of an insecure personality and weak self-esteem. For this reason, instead of blaming and obsessing over the behavior of the other person, you must begin to look inside yourself.

Before becoming involved in a relationship, you must take a deep inner journey. When jealousy is part of your relationship, there’s no doubt that something isn’t functioning well within yourself. Thus, it’s time to delve into everything that’s hidden in your mind and begin to delve deeper.

Someone who doesn’t know how to be alone, that is, someone who needs another person to be happy, instead of creating a healthy bond of love, can only build a relationship dominated by attachment. And with it, you’ll nurture the belief that the other person belongs to you and has a duty to make you happy.

In a healthy relationship, you must seek your own happiness without a long list of demands. Therefore, it wouldn’t be wrong to reflect on whether you can accept the other person as they are or look for someone to mold to your needs.

Thus, you must realize that jealousy is useless and try to banish it from your life. Why not free yourself from the inner emotional bonds and focus on boosting your self-esteem?

Othello Syndrome – Uncontrollable and Pathological Jealousy
Jealousy is pretty normal in romantic relationships. The problem is when it becomes uncontrollable, constant, and unhealthy. This is known as Othello syndrome. Read more »
Link copied!
Interesting Articles
Emotions
Desperation: When You Think All Is Lost

Emotions
When You're Incapable of Expressing Your Anger

Do you have a hard time expressing your anger? If your answer is "I never get angry", well... that isn't…