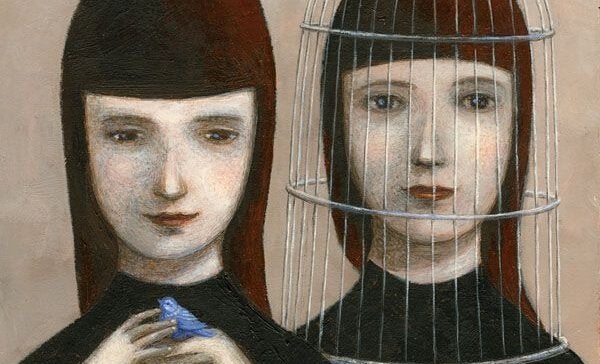 Narcissistic families are like spiders, trapping their children in a web of emotional suffering.

In this type of family dynamic, there’s always one person who puts their own needs before everybody else’s, thus obtaining absolute power. They use it to manipulate others with the goal of feeling taken care of, recognized, and validated at all levels.

People who grow up in dysfunctional environments like this say their family looks perfect on the outside, but on the inside it’s a living hell. It isn’t easy to get out of the situation.

While the bonds that develop in each family have their own fingerprints, they still share some important things in common.

The most characteristic trait of narcissistic families is the existence of very specific but unspoken rules. They’re rules that revolve around one person. They take the rights and recognition away from everyone else.

Therefore, it’s common for children to lack an emotional connection with their parents. The parents look down on them and subject them to silent but enduring mistreatment.

The truth about the unhealthy family dynamic is often silenced forever by cutting branches off the family tree.

In fact, the second the child becomes an adult and is able to finally escape their denigrating childhood environment, they get labeled a “bad kid” for abandoning the family, for daring to cut ties.

Children who live in narcissistic families struggle to acknowledge the abuse, emotional deficiencies, and the psychological damage they’ve suffered. In other people’s eyes, they have the perfect family.

Sara is 20 years old and is studying psychology. It’s been a year since she stopped living with her parents, and now she wants to restart her life from a distance, to get perspective, to put the pieces of herself back together so she can overcome her past and try to move forward.

Her scars come from the narcissistic family she grew up in, where her parents both played the power game.

Her father suffered from some type of personality disorder. She knows that now thanks to her studies. But nobody ever dared suggest he get professional help because the context in which he lived made it possible for him to be high-functioning even with his disorder.

Her mother was instrumental in that aspect, but she was also another victim of his. She gave in to all of his needs and was never able to set limits.

Sara was the scapegoat, her narcissistic father’s object of projection. The recipient of his frustrations, failures, and anger.

Her older sister, however, was the golden child. He molded her in his own image. And for some reason, he thought she was more talented than Sara. The situation affected Sara so much that she started to think that she was somehow defective.

But although the scapegoat occupies the worst position in narcissistic families, the golden child isn’t exactly a desirable position either. Such high expectations are placed on them that they’re more than guaranteed to suffer as well.

When you’re a part of this family portrait, it isn’t easy to escape, as growing up in it involves internalizing many destructive mandates, thought patterns, and ideas that have a considerable impact on a child’s mind. Here are a few common characteristics of narcissistic families:

How to get out of a narcissistic family environment

In Huckleberry Finn, Mark Twain wrote that we don’t have to let our family wounds define us. There’s always a piece of your true self hiding away in some corner of your heart that is still smiling and alive, and that can push you from absolutely nothing to happiness.

In order to remove yourself from that barren, poisonous environment, consider the following:

Not only is it unhealthy to live in an environment where emotional principles are distorted, it’s unbearable, especially for children.

When they become adults, they tend to be incapable of saying no to people or understanding they have the right to set limits. They have trouble expressing their own desires and needs, and choosing to not tolerate something.

Children with Emotionally Immature Parents
Having emotionally immature parents leaves deep scars on children. Many children end up taking on adult responsibilities and they grow up too quickly. Read more »
Link copied!
Interesting Articles
Psychology
Interoception: Beyond the Five Senses

Interoception is the ability to recognize the stimuli and sensations that our body sends us. It's the art of experiencing…

Psychology
When Your Ex Comes Back

A message, a call, and there they are - your ex returns. Just when you'd erased their name and filled your heart up with fresh air, your ex comes back like…