Creativity and Suffering: How Creating Things Can Channel Your Pain 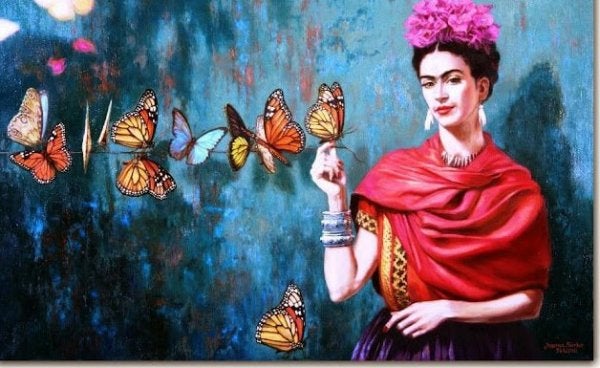 For Frida Kahlo, painting was a way of transforming her pain into art. It was her outlet, her refuge, her road to freedom. She refused to be a victim. She understood from an early age that life didn’t need to be seen through the lens of her physical pain. Instead, life for Frida Kahlo was characterized above all by passion.

When we look at her painting “The broken column” (1944), we get goosebumps. The symbolism of pain is intense and physical — almost desperate. All her years of treatment and the orthopedic devices she had to wear are represented there as a testimony. Exaltation of the human body, as torture.

“Feet, why would I want them if I have wings to fly?”

Frida herself once explained that she painted her self-portraits because she felt alone. For her, she painted because she needed to spend time with someone to explain how she felt. And that person was none other than herself.

The life and attitude of this famous Mexican painter has something to teach us: creativity is a vehicle. It is an exceptional mechanism capable of helping us not only restructure pain, but also channel suffering. Expressive therapies such as painting, writing or composing are also ways to find ourselves, pay attention to our own needs, and get emotional balance.

Creativity and suffering: the tortured artist

We like to think that making good, high, brilliant art takes a tortured mind and a wounded heart. The idea of the tormented poet writing frantically throughout the night, tormented with delirium tremens, is still very much alive in our collective ideology.

However, there’s a psychological reality that links these types of people much more closely than suffering does. Think of names like Lord Byron, Edgar Allan Poe, Ernest Hemmingway or Frida Kahlo and you think of one thing: passion. They did not have ordinary minds. In fact, if we analyze them in detail, we’ll see that they fit perfectly into what Howard Gardner understands as a creative mind:

Sadness and pain invite the artist to get to know himself

One of the most accurate definitions of creativity comes from the writer Richard Luecke. He argues that creativity is not a mental state, nor genetic, and certainly not exclusively associated with IQ.

Rather, it is a process of development and a means of expression geared towards solving problems or (and here’s the most interesting part) meeting emotional needs.

Suffering is a catalyst for artistic expression – there’s no doubt about that – but then so is happiness, fear or even anger. Pain, however, finds art to be a safe haven. Art is where a person can find himself again and take care of himself. Creativity is where he can dive into uncertainty and darkness, only to emerge again strengthened.

Creativity and suffering: the artist who has learned to manage his emotions

Rufus Wainwright is a well-known Canadian singer-songwriter who published an album entitled All Days Are Nights: Songs for Lulu in 2010. In this album he showed, one by one, all of his scars. At his concerts he dressed meticulously in black and asked the audience not to clap after each song.

He had just lost his mother, and he was carrying the burden of a traumatic past that began after being raped at just 14 years of age. He is now happily married, and he’s sailing through life on much calmer and safer emotional waters. However, some question whether he will still be able to write as good of songs as before, given that he’s happier now.

Wainwright is very clear on the subject. He knows very well that when it comes to suffering, there is no before and after, especially with childhood traumas. Our “demons” will always be there; they’ll never disappear altogether.

But a time does come when one chooses whether they’re going to be a victim forever, or whether they’ll give themselves permission to be happy, despite having to live with the memories.

In his compositions, you notice that some of his sadness from the past is still there. After all, it is a part of his life and part of what inspires his creativity. However, his current happiness is also a powerful inspiration for his art.

At the end of the day, people are a complex mixture of contrasting emotions, light and darkness, and they come together to make us what we are. The essential thing is not to give up – just like Frida Kahlo didn’t.

We must find our passion and make it our refuge. We can use it as a catalyst to give the world everything we’ve got, and at the same time take care of ourselves and our emotions.

Creativity: A Plant We Must Tend
Creativity: a word we have heard so many times before. But, are we really sure of what this tool implies in our daily life? Read more »
Link copied!
Interesting Articles
Psychology
Good People Don't Change Because They Think With Their Heart

Bad things happen to good people too. That is because destiny is not arbitrary, the blind world and egotism are…

Psychology
How to Make Children Use Technology Responsibly

Psychology
I Like My Breaks, My Little Bit of Time for Myself

Our breaks, our "parentheses" of loneliness, silence and sensory disconnection are like nutrients for our hearts and brains. It's a…