Mulholland Drive is the kind of film that you either love or hate; there's no in-between. It's a movie that you certainly can't be indifferent about since it represents something different in each scene. Instead of trying to decode it, let it take you into a labyrinth of passion, dreams, and lies. 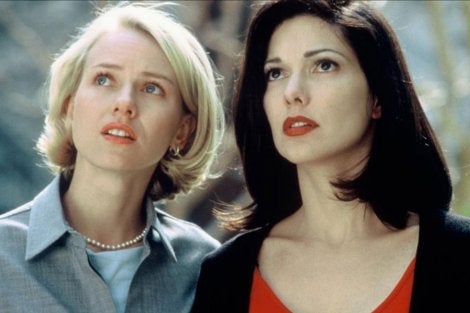 Mulholland Drive (2001) is one of the most renowned films by Twin Peaks creator, David Lynch. Like virtually all his work, this movie doesn’t leave anyone indifferent. To this day, it still sparks both admiration and shock. With time, it became one of the century’s best movies, although some people don’t quite agree.

Although making a synopsis can be a bit tricky due to the film’s structure, we can begin by saying that it starts when a young woman survives a car crash. Incidentally, the accident saved her life since she was about to be murdered in the car she was in.

In her purse, there’s a huge amount of money and a small blue key, but no clue about her identity. She lost her memory after the accident. Scared and confused, she decides to break into an apartment.

Then there’s Betty, an aspiring actress whose aunt let her stay in her Los Angeles house. After arriving at what would be her new home, she finds the injured woman, who decided to go by the name of Rita.

From that moment on, the characters set off to a new adventure: finding out who Rita truly is.  The film will take you to explore the most hidden passions of the main characters, and you’ll be the spectator of a seemingly incoherent story. From the initial thriller vibe, the film moves on to absolute darkness, and finally to a nightmare-ish setting, full of deception and odd symbolism.

Lynch created Mulholland Drive as a series, but the pilot shocked the producers to the point that they felt obligated to make it a film. And maybe that’s why it’s difficult to understand.

Perhaps it’s not worth trying to look at it from a linear standpoint or trying to give an explanation to it. Instead, you should simply let emotions and sensations take you over as you watch it.

Who knows why we, as humans, need an explanation for everything? In this article, we won’t try to do that with Mulholland Drive, but we’ll rather outline some of the film’s main points.

Why the need to explain Mulholland Drive?

Mulholland Drive is an actual labyrinth, a film that appeals to dream-like factors and that you could even associate with a dream’s structure. Throughout the years, people have tried to look for an explanation. Although it seems that there are some solid arguments, Lynch himself said that he doesn’t want to explain the film.

In a time of excessive information, it’s refreshing to watch a movie such as Mulholland Drive. It gives spectators the possibility to find an answer to what they’re watching.

For a moment, think about paintings, music, or poetry. They don’t always portray a clear message and you probably don’t really care too much about them. In fact, you probably just enjoy them and let your emotions flow naturally. Films can also make you feel that way and aren’t just pure entertainment.

However, the mere fact that Mulholland Drive sparks infinite questions and makes you engage with your environment is already a form of entertainment.

Furthermore, Lynch’s filmography usually aims to develop dream-like situations. When you dream, the images and stories that unravel in your mind are incoherent. However, while you’re dreaming, they make sense. Once you wake up, if you try to explain it to someone else, it’s difficult to put into words.

Mulholland Drive perfectly conforms to the dream logic, and just like in dreams, there’s freedom of interpretation.

When you’re dreaming, the people you see are people you’ve seen at least once in your life, even if you don’t remember them or see them in roles different from what they actually represent in real life.

Likewise, places you dream of can be radically different from reality and you can even do things you would never think of doing. Thus, if you try to compare Mulholland Drive with dreams, there’s a theory that seems to fit perfectly. Also, the film has lots of symbolism and it even takes you to an absolutely revealing place: the Club Silencio.

Club Silencio is one of the movie’s most hypnotic aspects, and at the same time, it marks a before and after. If you thought you were watching a story (or several stories) unravel with a somewhat linear structure, after the Club you’ll feel like you’re watching a whole new movie.

This odd place is kind of like the Magic Theater in Hermann Hesse’s novel, Steppenwolf. A place to meet up, where nothing will ever be the same, and maybe a place to discover the main character’s reality. In fact, blue hues prevail in this space and seem to recall a certain duality that the protagonist represents. Blue refers to mind and introspection. It’s in Rita’s key and then it’s in the box that Betty finds.

Rita’s key opens the box, which leads to a new reality and a new sequence of realities that now seem to fit. Everything you saw prior to it has a new meaning. You now witness a clear personality unfolding. And thanks to Club Silencio, you discover that you’ve been deceived. Everything you saw was an illusion, a lie, just like art, dreams, and the film itself.

The club’s magician seems to talk not only to the main characters but to spectators as well. He wakes you up from Lynch’s induced dream state.

From an initial “detective” point of view, you move on to a second, darker part, with a shocking and revealing turning point. From young Betty’s optimism and American-dream lifestyle, you then see Diane’s downfall and unstable behavior and, finally, a duality that seems to take over the protagonist.

Despite all its qualities and success, there are still some critics who can’t digest it entirely. Some even point out that maybe it’s overrated.

The actor’s performances are the highlight of the film, which undoubtedly boosted Naomi Watts’ career.

You can’t deny that Mulholland Drive is an authentic puzzle whose solution is highly subjective; it’s an exercise to spectators who try to engage with its plot. In short, it’s an invitation to your own mind, a labyrinth full of passion and deceit.

5 Films That Will Leave You Thinking for Days
Here are 5 movies that will leave you thinking. Next time you're in the mood for an inspiring or motivational film, any of these will make the cut. Read on! Read more »
Link copied!
Interesting Articles
Cinema, Television, and Psychology
Jurassic Park: Awareness Follows Fantasy