Moralization Is a Type of Violence

Moralization is a form of psychological violence that aims to impose a narrative centered on values through a right-or-wrong mindset. It's substantiated on making others feel guilty and not in the actual teaching of ethical principles. 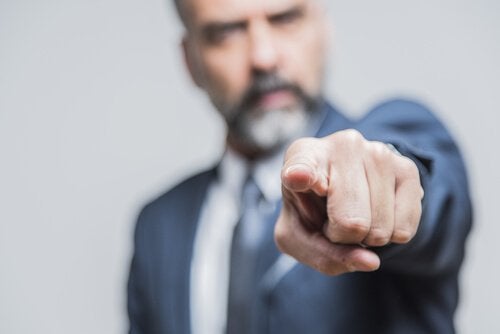 Moralization is a form of psychological violence that usually goes unnoticed. Imposing values or principles onto others is in many cases considered heroic. Thus, sometimes aggressive and humiliating attitudes are admired and defended.

People who resort to moralization justify themselves by saying that they do it for the good of the people. They want everyone else to adjust to certain values, although they use questionable means to achieve this. If those on the receiving end of the aggression don’t obey, they criticize, disrespect, denounce, and harass them.

In general, the cycle of moralization starts with paternalism. People share advice that no one asked for and evaluate others as if their judgment is respected and valuable. The most disturbing aspect about this is that they’re not exactly an example of good behavior. However, they tend to be in positions that lead them to believe they’re better than everyone else.

“He who wears his morality but as his best garment were better naked.”

The main characteristic of moralization is imposing behavior guidelines onto other people. The key word in the dynamic we’re describing is precisely that: imposing. The person wants their “valuable” narrative to be adopted by others, due to a simple and unquestionable reason: “that’s the narrative that people should follow”.

Those who practice moralization think that they’re morally superior, either because they’re a father or mother, a boss, a psychologist, or a priest or because they simply have better language skills than the rest. Sometimes, it’s easy for them to believe that they’re allowed to influence people’s behaviors. But that couldn’t be further from the truth.

Authentic moral principles have to count with both reflection and conviction. They’re not put in practice out of fear, pressure, or coercion. It’s true that during their upbringing, children need their parents’ guidance in order to fully and constructively become part of society. However, there’s a big difference between educating and moralizing. The former aims to create awareness, while the latter aims to control.

Moralization leads to psychological violence. First of all, because it states that the other person is morally inferior. Moralization is mostly deceitful. In the end, who can really say that a human being is morally superior to another? Is there full certainty that one person is more ethically coherent than another? Are the motivations and intentions that govern their behavior clear enough?

There are many cases of religious leaders, politicians, parents, and even teachers who don’t practice what they encourage people to do. Even if these figures practiced what they preach, their first proof of moral enlightening would be their ability to respect others’ individuality and integrity.

On the other hand, we should note that this kind of behavior isn’t just related to words. Usually, moralization is accompanied by gestures of approval or disapproval or labeling something either right or wrong. And this is synonymous with manipulation, which harms other people.

Moralization tends to be accompanied by controlling and disrespectful behavior. For example, moralizers usually feel entitled to interrogate or question people. They tend to ask things such as “Where are you going?”, “What are you going to do?”, “Why did you do that?”, or “What are you hiding from me?”

They may speak with a demanding tone as well. They want to be bosses because that’s a way of building and reaffirming their so-called superiority. Also, they usually feel they have the right to interpret other people’s actions. Thus, they tend to say things like: “You only did that because you were going to get something out of it”.

The most awful things moralizers do is ridicule, belittle, and try to berate those who don’t think or behave like they do. Their goal is to make people feel ashamed and guilty not because they’re necessarily worried about others’ moral values, but because they want their narrative to become the law.

How Social Morality Helps Normalize Violence
Social morality is the degree to which people conform to the precepts of socially established morals. In our daily lives, we conform to different rules that we deem appropriate to get along with others. Read more »
Link copied!
Interesting Articles
Culture
What Happens After Quarantine Ends?

Zentangle is a method of drawing that involves geometric repetition. The object is to promote calmness and meditation through structured patterns that…

Intuition has been the subject of heated discussions in different fields of knowledge. It has been featured in countless political decisions, and countless scientific discoveries. However, when we solve a problem…

Culture
Lisa Simpson: The Burden of Being Smart

The Simpsons is perhaps the most popular animated sitcom of all time. Almost everyone has seen at least one episode…

Culture
Fear of Change: How do You Break Free?

If you have a fear of change, it can be tough. However, you are not suffering alone. It's more common…