Sometimes people use masked control mechanisms in relationships as a way to put themselves at the service of another without making it fully evident. 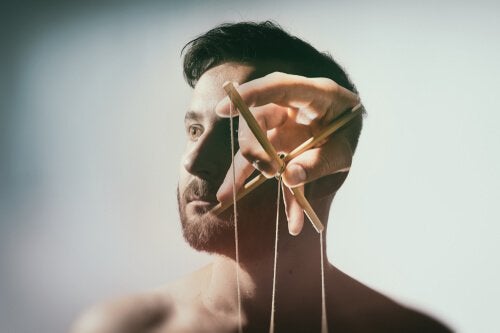 Masked control mechanisms are strategies that some people use to manipulate the behavior of those around them. These people use them because they want to be in control and dominate others. Therefore, they’re always against being self-sufficient.

Sometimes these attempts to be in control are very evident. The enforcing behavior is direct and leaves no room for doubt, like randomly demanding things to be done a certain way, yelling as a way to intimidate others, or putting others under pressure. However, other times, control mechanisms may go unnoticed.

“Attempts to overcome that duality, to tame the wayward and domesticate the riotous, to make the unknowable predictable and enchain the free-roaming — all such things sound the death-knell to love.”

Masked control mechanisms are very hard to identify. They entangle people in a web of confusion, in which they can stay in for a long time.

Here are five of the most common ones:

It’s one of the most common and harmful control mechanisms. It consists of generating thoughts or ideas inside someone else’s mind that lead them to feel guilty. This control mechanism can manifest in all kinds of relationships, but it’s more common between parents and children or in couples.

One example of this control mechanism is when someone says “Look at everything I’ve done for you”. Those who say it are keeping tabs on all the good things they do for another person. And they remind the other person of this often and play the victim to make them feel guilty. Many times, manipulators use this guilt to stay in control.

This masked control mechanism is often confused with profound love. The key word here is “need”. It consists of behaviors that make the other person feel essential in the manipulator’s life. Phrases like “I can’t live without you” are examples of this control mechanism.

At the same time, codependency can also convey the opposite message: “You need me.” This way, the manipulator develops a series of behaviors to prevent the other person from doing things they should be able to do by themselves. In order to control others, they offer to do things for them or help them out even when they didn’t ask for it.

3. Showing love and then stopping

It’s based on the manipulation of affection. The manipulator shows the other person love only when they do whatever they want. At the same time, they stop showing them love when the person they’re trying to control doesn’t meet their demands.

It’s a type of emotional blackmail that’s not very evident. Many times, the manipulator demands obedience, arguing that it’s for the person’s own good. Or they may even point out that giving and taking away affection is a way of setting healthy boundaries.

4. Having a common goal

The manipulator “sells” one of their goals to the other person, so an individual goal becomes a mutual one, even though the other person isn’t fully convinced that that’s what they really want for themselves.

The manipulator won’t have a problem expressing their disappointment if the other person doesn’t adjust to their goal or doesn’t do everything in their power to achieve it.

Emotional incest is one of the masked control mechanisms that greatly affects families. In particular, this is a type of mechanism that manifests between parents and children. The manipulator makes the child feel that they’re everything to their parents and that it’s them against the world.

Kids end up parenting their own parents: they support them, back them up, and guide them through difficult times. In fact, the children may even take responsibility for things that their parents should take care of. They learn to give without expecting anything back and this makes it hard for them to understand individuality.

All of these masked control mechanisms slip through the cracks every day in our human relationships. Insecurity or frustration hide behind them.

Victim Blaming Manipulation, A Form of Psychological Violence
One of the signs that indicates that a person is has suffered from victim blaming is that they constantly apologize for everything.  Read more »
Link copied!
Interesting Articles
Psychology
Suicidal Behaviors: Related Variables

Suicide is both a social and cultural phenomenon that affects a high percentage of the population. Actually, the mortality rate…

Whatever you have in your mind, dare to make it a reality. They are going to criticize you regardless. It is…

As a general rule, we seem to have a negative concept of spending time alone. We even use electronic devices and social networks to help ourselves feel more connected to…