The movie Moon is a nod to the science fiction of the past with its slow pace and transcendental questions about the human condition. Far from portraying the moon from the progressive, space-race point of view, the film sees it as the last resort for the survival of our species. 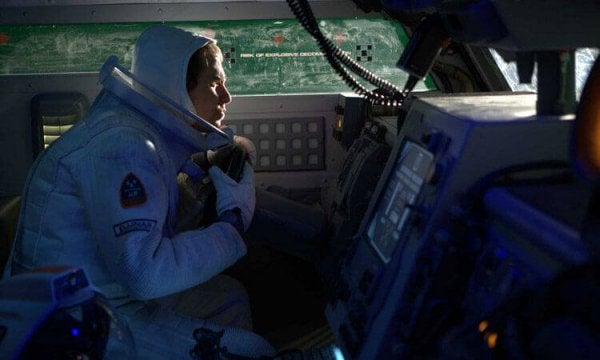 Until 2009, most people had no idea who Duncan Jones was. The rest knew him as David Bowie’s son. That year, however, he made a huge splash in the movie world with his incredible directorial debut: Moon.

Instead of following in his father’s footsteps, Jones dedicated himself to a different artistic pursuit: directing films. As a philosophy graduate with a doctoral degree, he decided to finish his education with a foray into film, which resulted in his first feature film, the subject of today’s article.

It’s easy to believe that having such a famous father would give him plenty of contacts and an easy in into the film world. While Jones could have used his father’s stage name to get easy money, he decided to just be Duncan Jones. As a result, the budget for his movie was fairly limited.

In spite of its humble beginnings, Moon surpassed everyone’s expectations and its reception was surprising. It dominated at the Sitges Film Festival and won several awards, such as Best Motion Picture of 2009.

It often seems as if only the big Hollywood producers are capable of doing sci-fi; that the formula for success has to involve spectacular special effects and enormous budgets. That’s what audiences are used to, or were used to, before Moon premiered.

Moon breaks from all of that. It’s an intimate science fiction film that reflects on the metaphysical and inherent questions about what it means to be human. With only one actor and limited resources, Duncan Jones made a slow-paced, simple, and introspective film. Moon is elegant, in a quiet way, and makes some interesting statements.

The premise is simple, and not overly absurd. The viewer is transported to a perhaps not-so-distant future in which the Earth has exhausted its resources and has to look elsewhere. In this case, the Moon.

The familiar satellite has become a mine, and the company called Lunar Industries LTD sends one of its astronauts there on a three-year mission.

The astronaut in question, Sam Bell, is in charge of controlling the excavators extracting the material necessary for generating energy on earth. A glitch in the communication satellite makes it impossible to contact Earth in real-time, which adds to his loneliness.

Allusions to other sci-fi films

The company has problems bigger than a broken satellite, so the only contact Bell has with his family is through recorded messages. His only company is GERTY the robot, who will remind plenty of viewers of HAL 9000 from Kubrick’s 2001: A Space Odyssey.

That isn’t the only reference to Kubrick’s film in Jones’s Moon. There are plenty of allusions and even some moments that are nearly identical to scenes from the movie that rediscovered science fiction. 2001 isn’t the only movie that Jones pays tribute to in Moon. There also allusions to films such as Alien (Scott, 1979) and Solaris (Tarkovski, 1972).

The movie is also a forerunner to more recent films such as Interstellar (Nolan, 2014), Ad Astra (Gray, 2019), or even High Life (Denis, 2018). All of these movies make you think about how science fiction has evolved over time, especially space-related sci-fi.

The evolution of a genre

From the dawn of time, human beings have looked to the sky with wonder. We’ve watched the stars and celestial bodies to different ends. One of the great science fiction pioneer films is Woman in the Moon (Fritz Lang, 1929).

The movie is divided into two, well-differentiated parts. The first part proposes the idea of a trip to the Moon and the second part is the trip itself. When the movie was made, humans were still dreaming about the stars and the conquest of space. The possibility was seen as a sign of progress and evolution; something to be celebrated.

Kubrick seemed to anticipate everything. He released his movie a year before the lunar landing; in the middle of the space race. He understood that machines could become a threat to mankind, but he ended up taking a hopeful view.

In Woman in the Moon, we see the dream of space travel fulfilled. Kubrick shows what could have been the result of the space race that was happening at that very moment.

With that in mind, it’s worth thinking about how things are now. Are people still dreaming about the greatness of space now that the space race has been such a disaster?

In that sense, Moon paints a fairly depressing picture of the future. In the movie, humans have destroyed the planet to such a degree that they have to look for resources in space. This time, however, the goal is to improve life back on Earth.

In the era of climate change, the world becomes inhospitable and space is the last hope. The idea of loneliness, which we saw in Moon’s predecessors, is addressed more explicitly here.

In Moon, the object of study is nothing more than man himself; a victim of his time, deceit, and big corporations. Science fiction often serves as a platform for reflection on the reality of the present day. In Moon, there’s no more daydreaming, no more hope… There’s only desolation.

In Moon, science fiction is a context which allows for reflections on what it means to be human. These are introspective reflections, perhaps, but they also touch on ideas about giant corporations dehumanizing their employees.

The aesthetics of the film are deliberate and meticulous in spite of the small budget. Sam Rockwell did an exceptional job of bringing his role to life and spending the majority of the film dealing with an older version of himself.

Jones offers the viewer two men who say they’re the same person but are at different moments in their lives. This causes conflict between them, and begs the question: is the essence of a person unalterable and unshakeable? Does your very being change with time and circumstances?

Moon puts us in this scenario, where the old self faces the young self, and they have endless differences. If you think about meeting the people you’ve been in the past, you’d probably end up in the same situation as the film’s main character.

Are they two different people? Is it the same person in different circumstances? These are some of the questions the movie provokes in viewers.

Duncan Jones didn’t hide the fact that his movie would deal with the dichotomy of self. However, it might be even more interesting for the viewer if they had no idea what the film was about before watching it.

Moon is predictable from the beginning but still manages to skillfully hook the viewer from the get-go, and continues to surprise and entertain through its entirety. Its slow pace is a welcome change from the galloping rhythm of most contemporary science fiction. It’s reminiscent of reality with its claustrophobic and careful ambiance.

Without too much action, Moon poses transcendental questions about what it means to be human. These questions show that science fiction still has a critical component which we usually associate with dystopian art; unmasking exploitative corporate practices and questioning ideas such as freedom, dehumanization, and progress.

Moon does all of that while drawing from older science fiction and using those ideas in an elegant, but unique way. Jones’ seminal work is deeply rooted in the slow-paced and measured sci-fi of the past while asking questions about modern reality.

His vision is a far cry from the enthusiasm of the space race from decades earlier. In Moon, man’s ventures into space are done out of necessity. The resources there are our last hope.

HAL 9000: Intelligence and Evolution
The emblematic film 2001: A Space Odyssey continues to captivate viewers. Read this article to learn about HAL 9000, a very human-like machine. Read more »
Link copied!
Interesting Articles
Cinema, Television, and Psychology
Up: It's Never Too Late to Fulfill Our Life Goals