Monoamines and their Functions

The presence of monoamines is essential. Therefore, it's very important to know their functions. Find out what they are in this article! 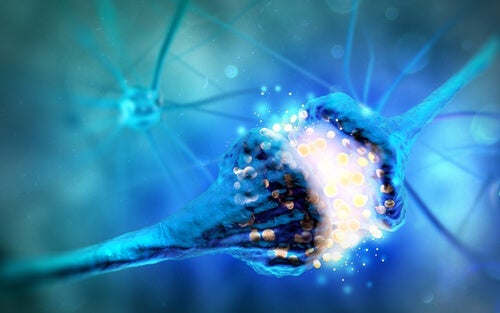 Neurotransmitters are essential for the well-being of humans. For example, thanks to them, our brain is able to communicate with other parts of the body. That being said, monoamines are located within the neurophysiological classification of neurotransmitters.

Monoamines receive and release synaptic material, which contains information for each of the complex activities we carry out. Despite their microscopic size, they can regulate functions such as attention, emotional states, and visceral functions.

Monoamines and their functions

A variety of psychiatric disorders are characterized by an interruption of the regulation of neurotransmitters in the monoamine group. Actually, many psychotropic drugs (which affect behavior or mood) affect one or more stages of their synthesis, storage, or degradation.

In this sense, some antidepressants act as monoamine oxidase inhibitors (MAOI). This is an enzyme that’s necessary for the catabolism of monoamines.

Several neural systems in the brain produce monoamines. Therefore, monoaminergic neurons serve to modulate the functions of large regions of the brain; they do this by increasing or decreasing the activity of certain brain activities.

Types of monoamines: Catecholamines and indolamines

The neurotransmitter dopamine is synthesized by certain nerve cells from the amino acid tyrosine, which is a component of dietary protein. It affects muscle movement, tissue growth, and immune system functioning.

There’s a close association between dopaminergic networks of the brain and certain behaviors such as exploration, surveillance, pleasure-seeking, and avoidance of punishment. On the other hand, low dopaminergic activity is found in melancholic depressions, characterized by a decrease in motor and initiative activity.

Adrenaline, also known as epinephrine, is one of those polyvalent substances that the human body uses to regulate different processes.

On one hand, it’s a hormone since it travels through the blood to reach different areas of the body and fulfill its tasks. On the other, it’s a neurotransmitter, which means that it acts as an intermediary in neuronal communication.

Adrenaline is the hormone and neurotransmitter the body releases in situations where it’s important to be alert and active. In other words, adrenaline prepares the body to react quickly. Particularly speaking, the body releases it more when it detects a threat nearby.

The main noradrenergic neurons are located in the locus coeruleus and the brain stem nucleus. At the same time, it’s projected diffusely on the midbrain and telencephalon. These neurons have an important role in sleep modulation.

Research with rats showed that destroying the base of norepinephrine neurons (the locus coeruleus) lead to a total disappearance of fear. In humans, the decrease in norepinephrine affects the acquisition of new knowledge and associations. Nonetheless, consuming caffeine increases norepinephrine in the brain and enhances the ability to perform repetitive, boring, and rewardless tasks.

Administrating tyrosine to individuals with depression increases norepinephrine secretion. This treatment improves the hedonic component of this disorder.

To conclude, norepinephrine seems to stimulate awakening, learning processes, sociability, sensitivity to emotional cues, and sexual desire. On the contrary, when there’s an interruption in the synthesis or release of norepinephrine, withdrawal, detachment, demotivation, depression, and low libido may occur.

Indolamines are neurotransmitters that contain an indole group. In this group, we have serotonin and melatonin.

The destruction of brain regions with a high density of serotonergic neurons leads to a disinhibition of reflexive control over behavior. In other words, it leads to impulses, regardless of the consequences they may bring.

When electric shocks were discharged to a rat that tried to get food, it stopped trying after 12 tests. However, at low serotonin levels, it persisted after 200 discharges.

Mice and rats generally coexist in a cage without any problems. However, when their serotonin level is abnormally low, the rats would for sure try to kill the mice. Serotonin depletion also leads to disinhibition of sexual activity.

In humans, very low serotonin levels are usually associated with impulsive, aggressive, or even very violent behavior. This is particularly the case in violent forms of suicide.

Dr. Markus Kruesi’s team from the University of Illinois in Chicago found that low serotonin levels in children were the best predictor of criminal or suicidal behavior.

Melatonin is a hormone that affects sleep. The production and release of melatonin in the brain is related to the time of day. Basically, it increases with darkness and decreases when there’s light. It’s also important to note that melatonin production decreases with age.

Melatonin is also available as a supplement, generally in tablet form which people can take orally. Most melatonin supplements are manufactured in a laboratory. Many individuals use melatonin to fight sleep disorders such as insomnia and jet lag.

Brain
The Importance of Your Brain's Unique Neural Signatures