Money and Relationship: A Tricky Combination

Statistics indicate that money and relationship form a delicate mixture. Money and money management is one of the most common causes of divorce, as well as one of the top reasons for conflict. The best thing is to be frank and direct from the beginning. 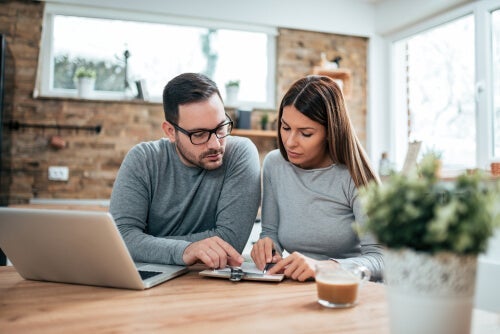 There comes a time when dreamy feelings aren’t everything anymore in love. It’s when earthly considerations start to become more important and a practical spirit gradually replaces idealism. The economic side of things comes up, for instance. That’s when money and relationship can cause conflict. That is, of course, if you don’t manage the combination with intelligence and tact.

Money is much more than just a material resource for humans. Each person confers a conscious and unconscious meaning to it. This depends on various factors. For instance, how certain childhood stages have been resolved, the education we’ve received, the experiences we’ve had with money, and the environment we live in.

Sooner or later, money and relationship are two realities that have to mix. Sometimes, this might happen right from the start. Many people consider their partner’s economic situation an important aspect. Also, many relationships turn toxic and end due to a lack of agreement or understanding regarding economic matters.

Money and relationship: the initial subtlety

On the topic of money, there’s always going to be something of hypocrisy around, as Sigmund Freud indicated. This father of psychoanalysis insisted that, as in sexual topics, monetary topics are also full of taboos, euphemisms, and prejudices. You can especially note this in the initial stages of a relationship.

At the start of a romantic relationship, it’s common to consider money a topic that’s too prosaic to include in the list of things that the new couple has to agree on. What’s more, the intensity of love fosters surrender, avoiding disagreements. Both want to pay for things and give to the other.

During this primary stage of a relationship, certain patterns are put in place that will define the future combination of money and relationship. Almost always, one person will be more generous with their resources, while the other will be more receptive. The couple forms and accepts implicit agreements about conduct related to expenses.

Of course, specific discussions regarding money usually have to start when the couple decides to move in together.

Generally, people look for a partner with a similar economic level. It isn’t always the case, but it’s very common. However, despite this, it’s unlikely that both people have the same incomes, the same spending patterns, and the same expectations. Although differences are common in those areas, they can be effectively managed.

Thus, one of the root causes of problems over money is when there are economic differences between the couple. Another potential cause of problems is that money is important in the distribution of power. What do we mean by that?

For instance, there are many couples where just one person has the majority or all the responsibility of earning the money. This generates a debt on the part of the other person that has to be paid in some way. The breadwinner may insist, for example, that their preferences or wants take precedence when the two aren’t in agreement over something.

It’s also not uncommon for there to be some competition between the couple. This happens especially when both are professionals and both have their own good incomes. If not, if the breadwinner wants to vent frustration, they may vent it on their partner when they aren’t happy.

A subject for frank discussion

“Young Couples and Divorce”, a study by Gonzalez and Espinosa, was published in the psychology magazine Iztacala. This work points out that money is the area with the highest probability of generating conflict in an average couple.

The study indicates that money is a factor in the highest number and intensity of disagreements between couples. This includes before, during, and after a divorce. Researchers state that the subject of money is often laced with feelings of anguish, anger, resentment, envy, and jealousy, among others.

Without realizing it, many couples end up using money for purposes that it shouldn’t be used for. To control their partner, for example. Or to compensate for an emotional wound, such as infidelity, indifference, or abuse.

That’s why the subject of money and relationship is a topic that requires coordinated conversation and agreements. The healthiest way to handle the topic of money is by addressing it directly and reviewing what’s agreed on a regular basis.

What Should You Talk about in a New Relationship?
When you’re starting a new relationship, it’s a good idea to talk about certain things, especially if you want to avoid unpleasant surprises down the line.  Read more »
Link copied!
Interesting Articles
Family
My Family Doesn't Know Who Noam Chomsky Is

Family
How to Deal with High Conflict Teenagers

What exactly are high-conflict teenagers? What does this term even mean? Is there anything parents can do about it? There…