Mirror-Touch Synesthesia - A Way to Connect

Mirror-touch synesthesia is an interesting condition that was recently discovered. People who have it are able to feel the sensations that others experience. Isn't it amazing? 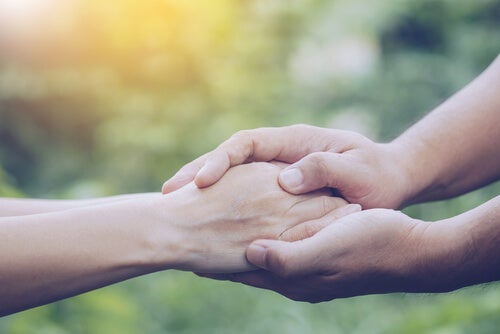 Every day we come into contact with many other people, but how deeply do we actually connect? It isn’t easy to do most of the time. However, you could say that connecting is a way of life for people with mirror-touch synesthesia.

In today’s article, we’d like to explore this form of unparalleled connection. First, we’re going to tell you what synesthesia is, then we’ll delve deeper into the characteristics of mirror-touch synesthesia and, finally, we’ll tell you how researchers measure this phenomenon.

This means that synesthesia consists of a kind of sensory alteration. In it, a stimulus of one sense generates typical sensations of another sense. Although the phenomenon may seem strange, this way of feeling is neither pathological nor caused by a medical condition.

There are different forms of synesthesia:

The field of synesthesia is a field that’s increasingly investigated. Therefore, there are many recent studies on it. Mirror-touch synesthesia was discovered in 2005.

Mirror-touch synesthesia consists of the experimentation of tactile sensations after observing that other people are touched. It seems amazing, right?

Here are the main characteristics of this fascinating type of synesthesia:

There are many theories on the cause of this type of synesthesia. The main three are:

They also study mirror neurons, which seem to be more prevalent in people with mirror-touch synesthesia. For instance, non-synesthetic people merely activate imitative responses while they feel very real for those with this type of synesthesia.

Similarly, there seems to be a link between mirror-touch synesthesia and empathy. It seems that people with this type of synesthesia have greater activation in mirror systems and, therefore, develop a higher level of empathy.

Can you measure mirror-touch synesthesia?

Several investigations tried to measure this kind of synesthesia through different methods to try to better understand it. For example, they used resonance imaging and thermography methods. Thanks to these researchers, we know more about how mirror-touch synesthesia works.

Blakemore, Bristow, Bird, Frith, and Ward presented an experiment of their own design in an article entitled “Somatosensory activations during the observation of touch and a case of vision-touch synaesthesia” later published in the Journal of Brain and Neurology. It consisted of investigating the neural system involved in the perception of touch through magnetic resonance imaging.

The researchers applied it to 12 people without synesthesia and, in “C”, a woman with mirror-touch synesthesia. Then, they analyzed the neuronal activity for the observation of the touch on the face and the human neck, in order to investigate the somatosensory typography in both cases.

As a result, they learned that the activation patterns of “C” differed from the control people (who weren’t synesthetic) in three ways:

Through these measurements, they managed to demonstrate that “C” had a mirror system for touch that’s above the threshold for conscious tactile perception.

Furthermore, Elvira Salazar decided to analyze whether the observation of painful tactile stimuli generates body asymmetry in the thermogram of the observer, as part of her doctoral dissertation. That is, they set out to observe this asymmetry by applying thermography, a technique with which they could graphically record the temperature.

Because there should be symmetry in normal situations unless there’s a pathology. The researchers wanted to know if not having it and observing situations of pain and touch could produce asymmetry in the thermography.

Thus, they found an objective measure, thermal asymmetry, to be able to study the physiological manifestations of mirror-touch synesthesia beyond the patterns of brain activity, subjective experience, and behavioral markers.

The tactile sensation these people feel after observing it in others is so deep that some people think that those who possess it are more empathetic. What an awesome way to connect with others! We truly hope there’ll be more studies that continue to bring us closer to this and other forms of synesthesia so we can learn more about this amazing phenomenon.