The Memories Evoked by Our Five Senses 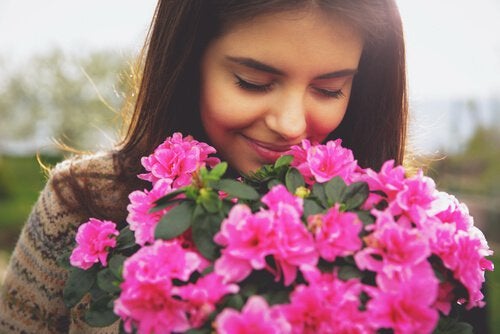 Walking through the street distracted by my thoughts and memories, I have caught a whiff of something, a bakery nearby invaded my nose with a perfume of steaming cookies and cupcakes, butter, eggs, and sugar that transported me to another moment, another place.

Suddenly, rather than being on a street in my city, I was in a house in the mountains, ten years old, playing hide and seek with my brother in the garden while my mother cooked. We have all experienced a smell, a sound, a taste, or an image that sends us to a world of memories.

The senses can very clearly and touchingly evoke memories from our past, freeing positive emotions like pleasure or happiness, or negative ones like fear or anger. A song can remind us of a special moment with a special person, or of a trip with friends. A landscape can take us back to the memories of our adolescence and what we experienced in a certain place.

“I used to write for you, now I write to the moments that went by with you.”

Of the five senses, smell is one of the most powerful when it comes to evoking memories. A simple odor can unleash a cascade of feelings, the aroma of coffee, the smell of wet grass, the fragrance of perfume. They shoot our imagination off and they are capable of transporting us instantly to another place and another time.

This is why smell can awaken very vivid memories and reproduce sensations that contain that mixture of sensitivity and sadness that we call nostalgia.

A study performed by psychologist Silvia Álava called “Smells and Emotions” showed that people remember 35% of what they smell and only 5% of what they see. 1,000 people of both sexes between the ages of 25 and 45 years old participated in this study, and they arrived to the conclusion that memory is capable of perceiving up to 10,000 distinct aromas, but it is only capable of recognizing 200 smells.

According to the study, when we smell a perfume, that scent is registered in the brain, but it is also registered with an association to an emotion that we are feeling at that very moment, so when we evoke the smell, the emotion will also come back to us. Returning to the study, 83% of the participants confirmed that happy moments were called back with certain smells and 46.3% recognized that enjoying a familiar scent again influences them more than seeing an object that brought them memories.

“It was inevitable: the scent of bitter almonds always reminded him of the fate of unrequited love.”

The memories we see

The image of an object, of a bedroom, or a landscape, for example, can bring back a moment of our life that was pleasant for us. We can also experience the sensation of having been here before or having already experienced a situation, which is known as “déjà vu.”

There are two theories concerning that sensation, one sustaining that upon registration of an event in our memory, sometimes an area of the brain does this with a certain delay with respect to others, and the sensation that it is something already experienced takes place in that moment when that brain zone processes with a delay. Another theory, however, supposes that sometimes an event activates the delay of memories with which we have a real or imaginary relationship in our memory.

With regards to taste, when we eat, our brain integrates all of those sensations with information stored in our memory and looks for data about certain preparations that we relate with those same sensations, previous situations, or other foods with which we perceived similar stimuli. Taste can thus transform sensations derived from foods into memories.

As for sounds, we have all thought and even wound up listening to a certain soundtrack at some time in our lives. According to Petr Janata, professor of psychology at the University of California, Davis, “Our daily life lacks a spontaneous soundtrack, but many of our memories are mental films that start being projected in our brain when we learn a familiar music piece, which acts as its soundtrack.”

Janata explains in his study, published in the magazine Cerebral Cortex, how in one region of our brain, related to the storage and recovery of memories, the neurons work like a connection center between familiar melodies, memory, and emotion.

As such, all of our feelings can carry us to the past and evoke our memories at certain times, to make us experience a moment in which we felt really good or were very happy; it is simply a matter of letting yourself be swept away.

Link copied!
Interesting Articles
Wellness
Teenage-ism, An "Illness" That Affects Millions of Teenagers Around the World

A few months ago, a story went viral about a teenager that asked her mother to write her a note excusing…

Wellness
Letter to the One Who Watches over Me

It's been a long time since I've felt the need to share with the world, with life, that I miss you more and…

As parents, many of us have this idea that our children belong to us like they are our property, and we overprotect them to…

Emotions have an adaptive and evolutionary value, as science has been able to demonstrate it. Studies by Barbara L. Fredrickson,…

Wellness
There Are a Thousand Ways to Say I Love You

I love you. Those three words are so simple, but they are so hard to say. They can be expressed…