Matthieu Ricard: Biography of the "Happiest Person in the World"

Matthieu Ricard has achieved the highest known level of human activity in the left prefrontal cortex, an area associated with positive emotions. This unusual fact gave him the curious nickname of the "happiest man in the world". Would you like to join us as we explore the keys to happiness? 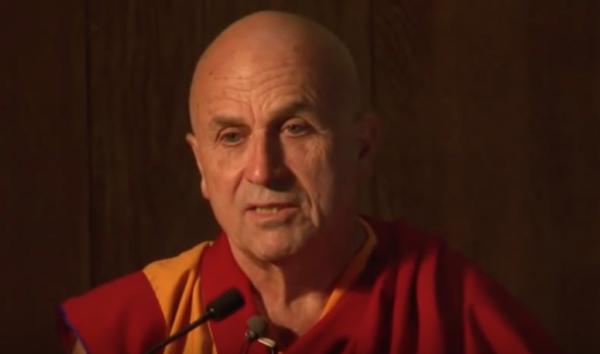 Matthieu Ricard is a French Buddhist writer and monk who’s lived in a monastery in Nepal for over 37 years. While he’s been there, he’s been a disciple of great Buddhist masters. His spiritual adventure began in 1979 when he decided to swap his brilliant scientific career for the study and practice of Tibetan Buddhism. In fact, he contributed a lot to the idea of the union of East and West; of science and spirituality.

In addition to his many humanitarian projects, Matthieu Ricard is an active member of the Mind and Life Institute. This institution has conducted numerous scientific studies on mental training, meditation practices, and brain plasticity.

After a life dedicated to the visionary projects of his masters, we’ve compiled some of the keys to his life. What can lead a man to completely abandon business success in order to live in Nepal? How can a man of science strip himself of everything in order to embrace spirituality?

Matthieu Ricard was born in France in 1946. From a very young age, he frequented the French intellectual circles his family belonged to. His father was a philosopher, journalist, and writer; and his mother, a renowned painter.

Matthieu complemented his education with studies in classical music, photography, and ornithology. He received his Ph.D. in Molecular Genetics from the Institut Pasteur, under the supervision of one of his mentors, French Nobel Prize winner, François Jacob.

After he completed his studies at the Pasteur Institute, Matthieu Ricard decided to leave the scientific world and focus on the practice of Tibetan Buddhism.

In 1972, he traveled to northern India and settled in the Himalayas. There, he trained and studied with several of the great Buddhist masters. This contact with Buddhist spirituality ended up making Ricard a very close disciple of Master Dilgo Khyentse Rinpoche.

His master was a visionary who dedicated his life to the consolidation of many temples, schools, and monasteries. These are locations dedicated to the study and practice of Tibetan Buddhist teachings. Since the death of his master in 1991, Matthieu Ricard immersed himself in continuing the work he had begun, dedicating all his time and energy to this goal.

Matthieu Ricard and his humanitarian projects

To date, Matthieu Ricard has developed 110 humanitarian projects in Tibet. Some noteworthy examples are the creation of health clinics, schools, and numerous bridges and infrastructures. One of the schools was built to care for and train more than 800 orphaned children who were crossing the Himalayan border into Nepal. This school has also taken in hundreds of older people.

Matthieu Ricard is co-director of the Buddhist monastery of Shechen in Nepal. From this place, he developed Khyentse Rinpoche’s projects. Ricard is also the author of many books that help to bring together and understand different cultures, particularly the Western and Eastern cultures. All the profits he collects from his publications are used to finance his humanitarian causes.

Ricard has set up foundations for international distribution and has obtained major affiliates in the rest of the world who collaborate on his projects in Bhutan, Nepal, and India. In recognition of his work in preserving Himalayan cultures, he was awarded the French National Order by French President Françoise Mitterrand in 1989.

The connection with the West

He has accompanied the Dalai Lama in recent decades as a personal interpreter on his trips to French-speaking countries. He’s a particularly active member of the Mind and Life Institute, led by professor and specialist in neuroplasticity, Richard J. Davison. Ricard has also taken part in trials at Princeton, Berkeley, Maastrich, and Leipzig Universities.

Matthieu Ricard participated in a study conducted by the University of Wisconsin. There, he underwent functional magnetic resonance imaging (fMRI) tests that yielded amazing results. Ricard has achieved the highest known level of human activity in the left prefrontal cortex.

The left prefrontal cortex is an area associated with positive emotions, which is really significant. Matthieu Ricard reached levels of -0.45. This was a really unusual result that earned him the nickname of “the happiest man in the world”. The results of this study constitute the fifth most consulted scientific study in history.

The keys to being the “happiest man in the world”

When he heard these surprising results, he said he wasn’t the only one. He stressed that the key lies in his meditation training in love and compassion. As far as he’s concerned, these results simply prove, once again, the great benefits of meditation.

Furthermore, these results can perhaps show that his humanitarian work and the connection with spirituality, stripped of the material influences, may have had an influence.

Matthieu Ricard’s work has been translated into 21 languages and sold in several countries. All his literary work has made a valuable contribution to the understanding of human nature and the world.

Some of the most well-known titles are: In Defense of Happiness, In Defense of Animals, and Infinity in the Palm of the Hand. In the latter, he reflects a conversation with the astrophysicist Trinh Xuan Thuan and establishes a dialogue between cultures.

Getting to know Mattieu Ricard is synonymous with getting to know spirituality. In addition to that, there’s an attempt to reconcile the West and Buddhism. At the same time, reading his works is a totally inspiring and reflective experience. Perhaps happiness isn’t as far away as it may seem, but it certainly does require certain effort and dedication.

“This book is the inspiring result of a profoundly interesting dialogue between Western science and Buddhist philosophy. It contributes to a better understanding of the true nature of our world and the way we live our lives.”

“It’s Called Calm”: A Poem for Reflection from the Dalai Lama
"It's Called Calm" is a poem in which the Dalai Lama teaches us the value of quietening the mind, and calming fears, worries and anxieties. Read more »
Link copied!
Interesting Articles
Biographies
John Forbes Nash - A Prodigious Mathematician