Marsha Linehan: from patient to psychologist and overcoming BPD 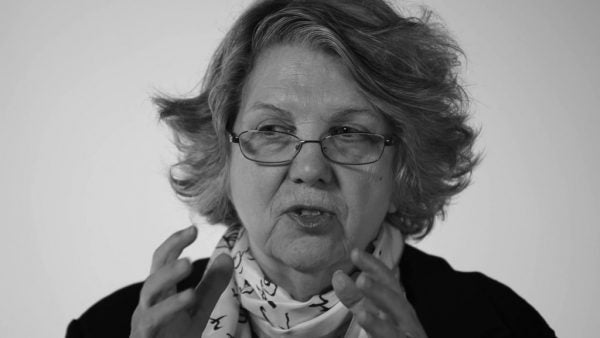 Marhsa Linehan is a psychologist, professor, American author and the creator of behavioral dialectic therapy. Behavior dialectic therapy is a treatment model developed for patients with borderline personality disorder (BPD). Linehan‘s therapy combines different behavior therapy techniques with principles derived from Zen and dialectical philosophy, such as the acceptance of reality.

However, Linehan still carries the stigma of her past with BPD. The burn marks and scars from cuts on her arms are proof of her history. When she was younger, Linehan was a patient with a very severe prognosis. She was hospitalized for 26 months. When she talks about this experience now, she says “I was in hell.”

The chronic feeling of emptiness, emotional instability, and the need to constantly please others is a real nightmare for those who suffer from BPD. Their self-identity is continually dependent on how others perceive them. They experience an intense fear of abandonment, and that fear can ultimately be what leads people to abandon them.

Linehan knew that BDP has a low survival rate, and because of that she spent 20 years desperately wanting to see a specialist to receive care. Linehan was attempting suicide. Each suicide attempt ended in a new hospitalization. In spite of all of this, Linehan wanted to recover. She persisted in her struggle with BPD and found a job as an employee with an insurance company. During this time she also started taking college classes at night.

Linehan was very strong in her faith and she frequently visited a chapel. During one of these visits, Linehan recalls the following, “One night, I was kneeling there. looking at the cross and the whole place turned golden. Suddenly I felt something was coming towards me. I ran to my room and for the first time I spoke to myself in the first person: I LOVE MYSELF. Since that day I felt transformed.”

For a year, she worked on her depressing thoughts. During this time she came to understand and accept her emotional storms. She learned to deal with her feelings because she had better knowledge of herself. Linehan also continued her studies. She obtained a doctorate from Loyola University of Chicago in 1971, which contributed to her understanding of her disorder.

What transformed Linehan’s experience was that she accepted herself as she was. This acceptance became increasingly important when she began to work with patients, first in a clinic with people with suicidal ideas and then in research.

Linehan wanted to convince people that therapy could allow patients to acquire new behaviors and learn how to act differently. The problem Linehan was facing was that deeply suicidal people have generally “failed” in their attempts to overcome the disorder. Marsha’s approach imposes a new reasoning: the behavior of these people is very logical in the face of suffering.

Later, Linehan tested her theory in the real world. She said, “I decided to help people with suicidal tendencies because they are the most miserable people in the world. they think they are bad and I realized that they were not. I understood it because I went through the hell of suffering without any hope of leaving it.”

Linehan chose to create people diagnosed with borderline personality disorder, characterized by dangerous behavior, including self-destruction or self-harm. She does this in the form of a reciprocal “contract” with these people: they must commit to follow the therapy until the end in order to have the opportunity to live.

Linehan as an academic figure

Dr. Marsha Linehan ascended the academic ladder from the Catholic University of America to the University of Washington in 1977. In the 1980’s and 1990’s, Marsha conducted studies that showed the progress of approximately 100 high-risk suicide patients with BPD. These patients underwent dialectic behavioral therapy (DBT) in weekly sessions. Compared to other therapies, the patients receiving DBT committed fewer suicide attempts and returned less frequently to hospitals.

The fundamental objective of dialectic behavioral therapy is that the patient learns to regulate extreme emotions and their impulses. This, in turn, decreases the maladaptive behaviors which are dependent on the state of mind. In addition, the patient learns to trust and validate their own experiences, emotions, thoughts, and behaviors.

Unlike other cognitive-behavioral programs, dialectical behavioral therapy is an intervention based on therapeutic principals rather than a treatment manual. This program is based on a hierarchy of therapeutic goals that are addressed according to their importance. This is the hierarchy established in individual therapy:

This structure allows a flexible approach based on the needs of each patient. In addition, it is important because it refers to change as the focus of intervention.

Traditional cognitive therapy focuses on achieving a resolution of emotional problems through behavioral and cognitive change. On the other hand, Linehan puts an emphasis on acceptance on validation. She believes that these ideals will create the most change for her patients. Thanks to her work, thousands of lives have been saved throughout the world.