Managing Your Personal Life When Working at Home

Working at home is a modality that allows people to approach work more naturally and flexibly. Instead of thinking about separating the professional and personal spheres, perhaps you should focus on balancing and reconciling them. 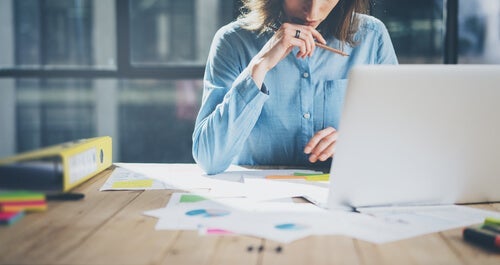 Working at home is becoming more and more widespread throughout the world. New technologies make it so that physical distance is no longer an obstacle to being part of a productive apparatus. For instance, you can be in Europe and easily work for a Chinese employer.

Of course, this has increased the possibilities and opportunities of hundreds of employees. However, as is usually the case, it’s also led to disturbing realities. One of these is the amalgamation that occurs between the professional and the personal life when working at home.

Your personal life and your work life are supposed to be separate. “Supposed to be” because it’s rarely the case in real life. Humans don’t have a switch to turn off or on one or other area of their life at will. Continue reading for more details on this.

The myth of separation when working at home

The separation between work and personal life was an invention of industrialism. Work was a natural part of personal life before it. Amazingly, this wasn’t a problem. In fact, working at home was the norm and there was no reason to move elsewhere.

Things changed with the Industrial Revolution and machines became the backbone of the production. Thus, working at home became a thing of the past. This is because workers had to go to the machines in order to do their work. The new model led to the definition of the fixed working schedule.

This is how people and societies began to spend extended periods of time at work. Apparently, these were two different spheres. Human beings don’t live in this compartmentalized way, though. Much of our personal lives go to the workplace and vice versa.

Many jobs didn’t require a congregation of workers around machines. However, offices also arose since industrialization. Work concentrated in these offices to facilitate it, along with customer service.

This changed again with new technologies. These days, a person can practically do all office work from home as long as they have a computer. This is a great tool that’s within the reach of many, many people. There are still companies that haven’t implemented working at home. However, it’s mainly due to a lack of vision or a desire to control every minute of their employee’s working hours.

This is a return to the era when working at home was the norm. The mentality that personal and professional areas should remain separate is quite prevalent. Sticking to this idea is exactly why people are so tense in this regard.

Working at home and tensions

It’s natural for human beings to integrate their professional and personal lives. Therefore, these two areas don’t have to be mutually exclusive. What causes tension is the desire to separate the inseparable and, of course, not being able to achieve it. Trying to be in only one of the dimensions that make up your being is stressful.

In reality, people are always working in one way or another. The meaning of the word “work” has to do with activity, effort, and transformation. The brain continues to process and organize information even during sleep.

Indeed, there are times when people work for others, at least relatively. This is because you help others attain their goals and achieve your own, at the same time, by earning an income. Then, there are those times in which you’re basically focusing on your goals while you work for someone else.

Reconciling and not separating

Working at home has a great advantage. It offers greater freedom to organize your time. This is overwhelming for some people, though. Thus, freedom leads to chaos and these people end up working a lot while feeling their work is constantly interrupted by some domestic issue or another.

Some people choose to implement strict schedules they often end up breaking. For instance, you can’t ignore that something is burning in the kitchen or that your child is crying in the living room if you work at home. As you can see, you must stop pretending that you can compartmentalize life and work. It isn’t good for your well-being.

Perhaps, the best thing to do is to stop looking for the perfect technique to separate the professional and personal spheres. You might need to be more flexible and learn to reconcile these two areas. Working at home lends itself to work according to objectives rather than schedules. Thus, attend to the daily priorities and not to the tyranny of a fixed schedule.

Working from Home with Children in the House
Many of us have no choice about working from home these days. But how do you do that successfully when you have children to look after? Read more »
Link copied!
Interesting Articles
Organisational Psychology
The Ten Most Stressful Jobs in the World

Organisational Psychology
Fired After Starting a New Job - What to Do