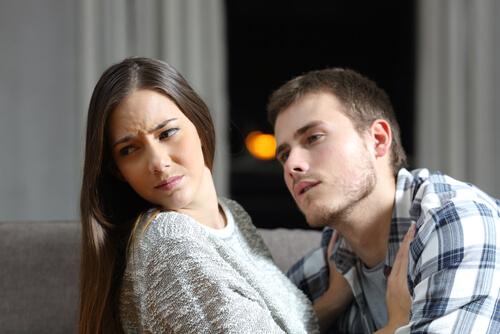 The field of sexuality is not free of phobias. Love play, characterized by actions such as kissing, caressing, and stroking your partner, can cause feelings of distress and discomfort in those who suffer from malaxophobia.

Malaxophobia, also known as sarmassophobia, is a great obstacle to the goal of strengthening intimacy in relationships. Additionally, it makes it difficult to establish love connections. Let’s look at what this rare phobia is also about. We’ll also see what treatments exist for the elimination of the distress it causes – or at least its reduction.

“Love has a powerful brother – hatred. Try not to offend the former, because the latter can kill you.”

Malaxophobia is characterized by an irrational and persistent fear of the game of seduction and love itself. People with malaxophobia experience symptoms of elevated anxiety in situations which, in principle, shouldn’t cause them. Aside from this, these people feel very frustrated because of the ambivalence associated with it. They feel the need and desire to be with someone else, but at the same time, they’re afraid because of all that is implied in the context of seduction.

It’s currently considered an uncommon phobia. Nevertheless, professionals have been able to study it in detail and it’s well-documented. Because of that, optimal recovery is possible if it’s treated correctly. Whatever the case may be, it’s interesting to study this illness and know what the most common symptoms are, as well as its causes and the treatment necessary for a complete recovery.

People with malaxophobia don’t show their fears in their normal environments. Even so, when they’re immersed in seduction activities (like getting to know someone they consider attractive), they may feel elevated anxiety and suffering. They only show the following symptoms in within that context:

The first symptoms manifest in a physical way. Irrational fear of seduction and love play doesn’t follow a pattern in this sense. Even so, it’s common for it to create an increase in nervous system activity.

So, we can identify an increased breathing rate, an increased heart rate, hyperventilation, sensation of suffocation, palpitations, muscular tension, pupil dilation, aches, excessive sweating, dizziness, and even vomiting as being among the most common symptoms.

With regard to psychological symptoms, we find that strong irrational beliefs appear. The thoughts are characterized as an almost delirious fear of love play, an inability to act in a composed way in situations that imply it, fear of being ridiculous, and a lack of confidence and self-esteem.

This negative thinking promotes the development of aversion to seductive activities. Also, these beliefs, along with the physical symptoms, increase irrational fear and lack of confidence even more.

When people with this illness experience a higher level of anxiety every time we’re found in situations involving seduction, they tend to avoid that type of situation. They also try to escape from all situations that imply contact with someone to whom they’re sexually attracted.

The primary behavioral symptom is, then, avoidance. The individual will do everything possible to avoid getting involved with love play or seduction. If, for some reason, she has to participate in something similar, she will flee the situation as soon as possible.

With regard to the causes, just as with phobias, it’s hard to pinpoint a single one. After several studies, it’s been discovered that the development of the disease tends to result from a combination of different factors.

As we said before, some treatments for eliminating or at least reducing the intensity of the distress felt by those suffering from this phobia have been developed. For this, it’s necessary to seek the help of a psychotherapist specialized in cognitive behavioral therapy. These are the most common therapies:

“That love is all there is, is all we know of love.”
-Emily Dickinson-

As we can see, malaxophobia is an uncommon phobia that can lead to serious health problems. Nonetheless, it’s encouraging to know that a treatment exists. Those who are afraid of seduction situations can overcome their problem.

Learn to Overcome Your Phobia!
We all have a phobia or know someone who has one. Some phobias are about things which don't condition our daily lives, so we can simply ignore them. Read more »
Link copied!
Interesting Articles
Psychology
7 Psychological Techniques to Lose Weight

Psychology
It's Not Me, It's You: Psychological Projection

Psychological projection: a term developed from Freudian theory, that describes a behavior that we encounter very often. We ourselves may have even done it…

Psychology
The ABC Model of Depression