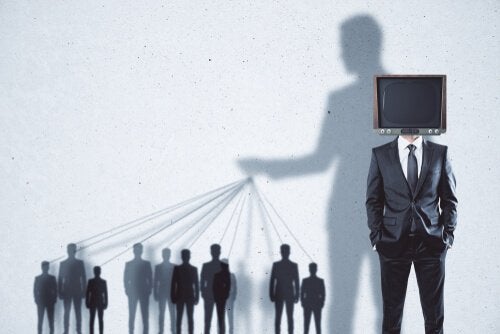 Does the end justify the means? Someone with Machiavellian intelligence would say yes, at least to some extent.

What is Machiavellian intelligence?

Machiavellian intelligence refers to complex social strategies. These are behaviors that an individual engages in to try and directly or indirectly maximize their success. To do that, they behave in a cooperative or combative way, depending on what they think will benefit them the most in the given situation.

That being said, it’s important not to confuse this term with social psychology‘s Machiavellianism. In that case, it’s a social behavior strategy in which an individual uses manipulation for personal benefit and generally to the detriment of others.

This type of intelligence arose from what was once a political doctrine. Machiavellian theories were so useful that they have given rise to new theories and studies on human behavior.

Someone with Machiavellian intelligence might not display all of these traits but will certainly have some of them. In general, you could define them as tendencies or generalities that will manifest depending on each individual’s personality and social environment.

Objectification of other humans

Someone with a Machiavellian personality might have certain sociopathic traits. It’s very difficult, or impossible, for them to empathize with other people. However, people display this lack of empathy in different degrees.

Because it’s so difficult for people like this to connect with others, they create a division between themselves and everyone else. That makes it easy to objectify people to varying degrees because there is no emotional connection.

“Everyone sees what you appear to be, few experience what you really are.”

Someone with Machiavellian intelligence has a heightened ability to discover others’ weaknesses. Once they discover what they are, they use that information for their own benefit.

Let’s look at a simple example. A Machiavellian person would become friends with someone who has a positive public image so that they could climb the social ladder. They don’t actually care about the person. Their behavior also changes depending on how the situation changes. If their “friend” loses their good social standing, they could easily end the friendship.

A tendency to manipulate other people

This trait goes hand in hand with the previous one. Many Machiavellian people use others as tools to help them get what they want. What’s more, they know that the way the act is frowned upon, so they do their best to hide their true intentions.

In fact, they won’t hesitate to claim they forgot to do whatever they promised in return for a favor once they get what they want. They might even try to turn the situation on its head and accuse everyone else of having ulterior motives.

“Never attempt to win by force what can be won by deception.”

Machiavellian people aren’t very impulsive. That being said, sometimes they use impulsivity as a shield to justify their behavior. It’s part of the show they put on for others. In reality, most of their actions are planned out and have a clear, defined goal.

People with Machiavellian personality tend to be highly intelligent. Consequently, they usually have very ambitious goals to which they dedicate lots of time and effort. They usually focus on taking advantage of other people for their own gain. All of their plans focus on achieving some end that they consider noble. Once they act on something, they have plenty of patience to wait for the results. They rarely get nervous.

Sights set on the long-term

Their patience and intelligence make them feel comfortable with long-term goals and plans. Their goals often project into the relatively far future. That’s because they believe their goals are important and they require complex steps. They know that for everything to turn out “well”, they have to avoid impulsivity. They must be cold and calculating.

Lastly, people with this personality tend to display a total lack of remorse. They’re also constantly planning something.

Do you know someone like this? Hopefully, this information will help you recognize them and avoid becoming their victim.

Machiavellian People: When the Ends Justify the Means
For Machiavellian people, the best way to handle people is to flatter them and tell them what they want to hear. Read more »
Link copied!
Interesting Articles
Psychology
Be Careful Who You Trust

People call Antonio Damasio the "brain wizard." They also say that it's thanks to him that we now understand mental…

Psychology
The Strength for Change Comes from Inside

Sometimes, life can lead us down a negative path. We feel frustrated, disheartened, like nothing is going well, and we don't know…