From Love to Hate: Is There Really Only a Step? 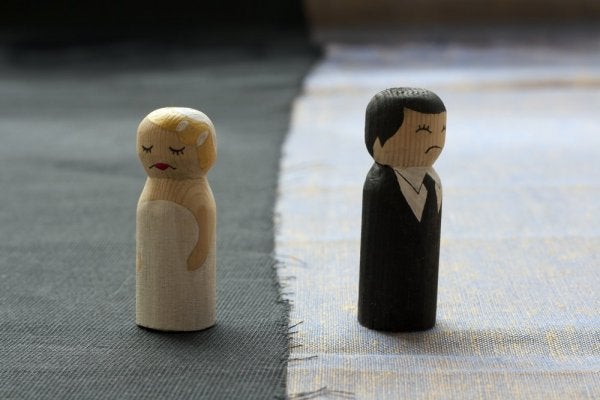 We often become surprised when we see couples who loved each other passionately, and suddenly, they become only a memory to each other.

We’re not talking about people who are suffering estrangement, but about the men and women who, after sharing a loving relationship, become worst enemies. Sometimes this doesn’t until many years have gone by, the couple held together by the same worn out link.

Other times the transformation occurs suddenly. Yesterday they loved each other and today they hate each other. It’s at that point when we ask: is it true that there’s only one step between love and hate?

There is no form of love that doesn’t enclose at least a tiny pinch of hatred. We might slightly hate a person because they aren’t always there for us. Or because they didn’t appreciate our efforts the way we would have hoped.

We might also feel a tinge of hate when the other person doesn’t understand us, or when they aren’t able to say the words we so wish to hear.

These are small bits of hatred that don’t usually turn into anything bigger. They vanish as quickly as they appeared and barely leave a trace, except in the most sensitive of personalities. They are usually easily dealt with and the affection is kept intact.

However, there are other situations in which the outcome isn’t as positive. Sometimes, one of those small episodes of contention can become the seed of a great forest of hatred.

Or it may be it’s simply the straw that broke the camel’s back.

Here’s the thing: love and hate aren’t completely opposite worlds. The opposite of love isn’t hate – it’s indifference. And just as all love implies a gram of hatred, all hatred holds a component of love deep within.

The paradox of love and hate

The step from love to hate usually happens in two ways.

Either a person wakes up after a long and dormant cycle of enduring something they don’t want to bear. Or someone does something so grave to the other, that they transform their feelings of love into a desire for irrepressible destruction.

This situation is more common in people who have low frustration tolerance, or elevated narcissism. If there are no emotional resources to maintain emotional balance with an adverse situation, it is likely that they’ll blame others for the feeling of frustration they are experiencing.

We therefore hate the other person, because they have managed to uncover our weaknesses, our insecurities and our dependency. Narcissistic personalities are unable to differentiate between an offense and an act of self-assertion coming from the other person. If the other asks for space, recognition or autonomy, they see it as a sign of aggression.

They assume that their partner should live according to their rules, and any act of freedom is perceived as a personal threat. That’s why they can even end up reacting violently.

Hatred creates very strong bonds with the other person. In fact, it can result in narrower links than those built from love. The worst thing is that when it gives way to a string of indignities, the situation becomes a cycle that is constantly fed back.

Neither one nor the other, can make a healthy break. Life becomes a game of of damaging and avoiding being damaged. They feel they can’t give up on the situation, because that would be the equivalent of throwing in the towel.

This dramatic cycle is extremely harmful. It’s one of those situations in which, no matter how much you win, you’re always losing. There’s no way to resolve it.

The only alternative is to turn away from that person and give up that hatred, which may very well become an unbearable prison from which you’ll only end up leaving with wounds.

Guilt never comes alone, and it may show up in our lives for a multitude of reasons. Sometimes it tortures…

Sometimes, you blame yourself for feeling down or depressed. However, you don't realize that, in some situations, it's OK to feel bad. Have you ever wondered what lies behind certain…

Throughout our lives we love and fall in love with many people -- couples, friends, family -- but do we know…

Wellness
What's the Relationship Between Emotions and Obesity?

Obesity is a major health issue in the modern world. Science still hasn't managed to explain 100% of the microbiological processes…

Wellness
An Open Letter to my Son With Autism

I've always dreamed of being a mother. I pictured all the details of my future child's face: his father's eyes,…